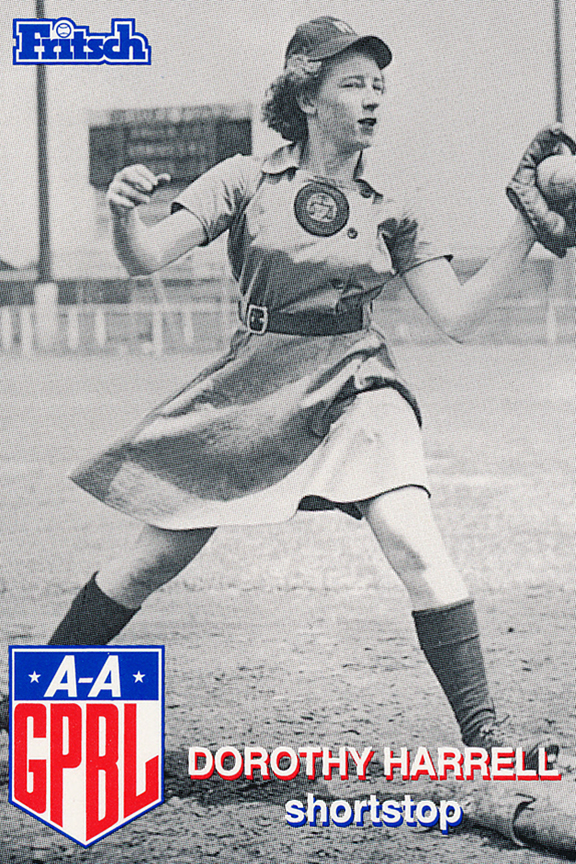 Dorothy “Snookie” Doyle’s mother loved baseball so much that she gave her young daughter a boy’s baseball uniform one Christmas. Snookie embraced the game, too, so much so that she became an outstanding shortstop for the Rockford Peaches of the AAGPBL and earned all-star honors four times. After eight seasons in the league, Snookie moved on to softball, playing with teams in Phoenix, Arizona; Portland, Oregon; and Los Angeles. At the end of her softball career, she even served as manager of the champion Orange Lionettes. At the same time, Snookie earned an associate degree from El Camino College in Torrance, California, and a bachelors degree from Long Beach State. She taught physical education at the junior high level and then became a guidance counselor. She was head counselor when she retired after 26 years of teaching in the Los Angeles area. Like her lifelong friend Tiby Eisen, Snookie  participates in baseball clinics for Kids in Sports, Sports Educators of America, the Los Angeles Dodgers, and the California Angels.  She lived in Cathedral City, California.

Snookie was a smooth fielding shortstop for the Rockford Peaches starting in 1944. She was part of a very strong infield the won the championship in 1945. Dorothy was a complete ball player who played well defensively and was a soild offensive player as well. She had good speed on the bases and was an All-Star for many seasons in the AAGPBL. Snookie was a hugh fan favoite for many years in Rockford.

Dorothy Harrell Doyle of Cathedral City, one of the original members of the All- American Girls Professional Baseball League, died last week [9/15/11] after a brief illness. She was 87.

An all-star shortstop for the famed Rockford Peaches and nicknamed “Snookie,” she played eight seasons for the Peaches from 1944-1952. The AAGPBL was the inspiration for the iconic movie “A League of Their Own.”

A public memorial service is scheduled for Saturday [9/24/11] at 11 a.m. at the Trinity Lutheran Church in Indio.

Doyle moved to the desert after retiring from a longtime teaching career in the Compton Unified School District. She was an avid golfer.

During her baseball career, she was a five-time all-star, sparking her team to six playoff appearances and four pennants.

“She was a super superstar,'' said Shirley Burkovich, another former Peach who met up with Doyle at the premier of the movie in 1992 and the two eventually realized they had both retired to Cathedral City. “Not just for her playing, but in everything she did. She was an excellent ballplayer.”

Following her playing days, which included a stint in Arizona and Southern California independent leagues, Doyle returned to college to gain a bachelor's degree in physical education from Long Beach State. She was a teacher and counselor for the Compton Unified School District before retiring in 1984.

She joined the Golden Diamonds Girls, a group of former AAGPBL players who made frequent appearances at reunions and card shows.

She is also featured at Legends Field in Palm Desert with some of her former teammates of the AAGPBL who also live in the desert.

“She was one of the greatest who ever played,'' sai, a friend from her hometown of Gardena who now lives in Indio. “She grew up two doors down from me and we never knew each other until we met in the desert.”

Doyle and her friend Burkovich, often traveled to appearances, reunions, card shows and held baseball clinics promoting women's athletics across the country. Doyle was widowed (David) in 1963 and never remarried.

She is also featured as one of the best shortstops to ever play the game with a 10-foot banner hanging at Safeco Field in Seattle, in between Roberto Clemente and Brooks Robinson.

Doyle posted a lifetime batting average .228 and a career fielding percentage of .918. She played in 799 games, had 2,922 at at-bats, 306 RBIs, 229 stolen bases and only struck out 95 times. She is also part of the AAGPBL display at the Baseball Hall of Fame and Museum in Cooperstown, New York.