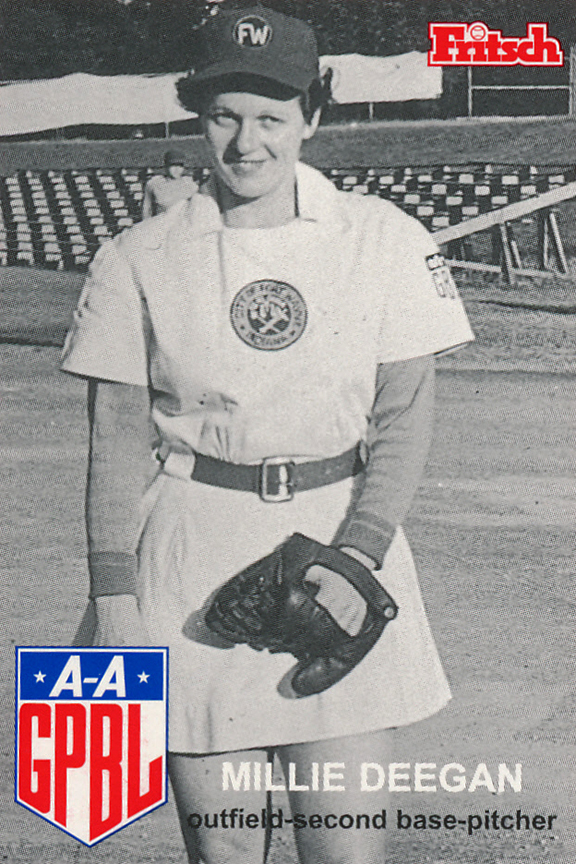 From the Associated Press:

Mildred "Millie" Deegan, played 10 seasons with the All-American Girls Professional Baseball League. Deegan, who was in the league from 1943 until 1952, spent six years pitching and playing second base for the Rockford Peaches, the team featured in the 1992 movie "A League of Their Own." She ended up with a .260 batting average.

Before switching to baseball, Deegan, who was born in Brooklyn, N.Y., earned a reputation as "the Babe Ruth of women's softball" for her hitting prowess. Once, at the old Madison Square Garden in New York City, she hit a softball so far that even Ruth was impressed. He posed with her and squeezed the biceps on her right arm.

After the release of "A League of Their Own," Deegan told the St. Petersburg Times that the women playing in the league did have to go to charm school to become "All-American Girls." Deegan also recalled some low points during her playing days, including the 1946 championship game against the Racine Belles when she gave up the winning run.

When it comes to music , she likes it all, in fact she enjoyed playing her violin. She was also a photopher and took many team and individual pictures of the AAGPBL.

After retiring from baseball, Millie joined a New Jersey softball team and remained as a coach for about 20 years. She moved to Florida in 1976.

Mildred "Millie" Eleanor Deegan was Born December 11, 1919 in Brooklyn, NY and Died July 21, 2002 in New Port Richey, Florida. She was a pitcher and second baseman who played ten seasons in the All-American Girls Professional Baseball League from 1943 to 1952.

Deegan was a star athlete at Brooklyn's Lincoln High School and in 1935 was the "champion woman baseball thrower" in New York City. She learned baseball from her father, coach of the Brooklyn Bloomer Girls team. As a teenager she placed second behind Babe Didrikson Zaharias in the javelin throw in the national meet before the 1936 Olympics. However, at 16 she was too young. Later, she played fastpitch softball for the New York Americanettes in 1938-39. In 1939 her batting average was .406. That year she was the guest of New York City Mayor Fiorello LaGuardia (along with other celebrities) at the opening day of the New York World's Fair. She played later with the Manhattan Beach Girls, who competed in the Metropolitan League in Madison Square Garden. Deegan gained the nickname of "the Babe Ruth of Women's Softball" when she hit a 250-foot home run inside the building. Babe Ruth, the only other player ever to hit a home run inside the Garden, was in attendance, and posed for a photograph with her, squeezing her biceps.

Deegan joined a Chicago fastpitch softball team for the ASA National Tournament in 1943 and was soon signed by the All-American league to play for the Rockford Peaches. She played for the Peaches until midway through the 1947 season when she was traded to the Kenosha Comets, beginning a four year stretch in which she played for six teams. In 1948 Deegan was with the Comets and Springfield Sallies, from 1949 through part of the 1951 season she played with the Fort Wayne Daisies. She finished the season with the Peoria Redwings before ending her career in 1952 when she returned to the Rockford franchise. Her managers and coaches included former big-leaguers Max Carey, Jimmie Foxx, Bill Wamby and Marty McManus. Deegan also worked as the league's official photographer.

As a pitcher, she gave up the winning run to the Racine Belles in the final game of the 1946 Shaughnessy series but had a lifetime ERA of 2.36. Her career batting average was .260.

In 1944, the Brooklyn Dodgers brought Deegan and two other women players to the team's spring training camp at Bear Mountain, NY. She was given permission to travel with the team from manager Leo Durocher but was not allowed to step on the field. However after retrieving a foul ball during an exhibition game, one of the coaches gave her a fungo bat and let her bat infield practice. Durocher was quoted as saying that "...if we run out of men, Millie will be the first on the team...if she were a man, she no doubt would have been a Dodger."

After retiring from baseball, Deegan worked as a commercial photographer in Miami, North Carolina, and New Jersey. She also worked for the Western Electric Corporation in Elizabeth, NJ. She served as a coach for a semi-professional women's softball team for 22 years and as a coach at Middlesex County College in the late 1970s. Deegan moved to Florida in 1976 and died at the age of 82 following a two-year battle with breast cancer.