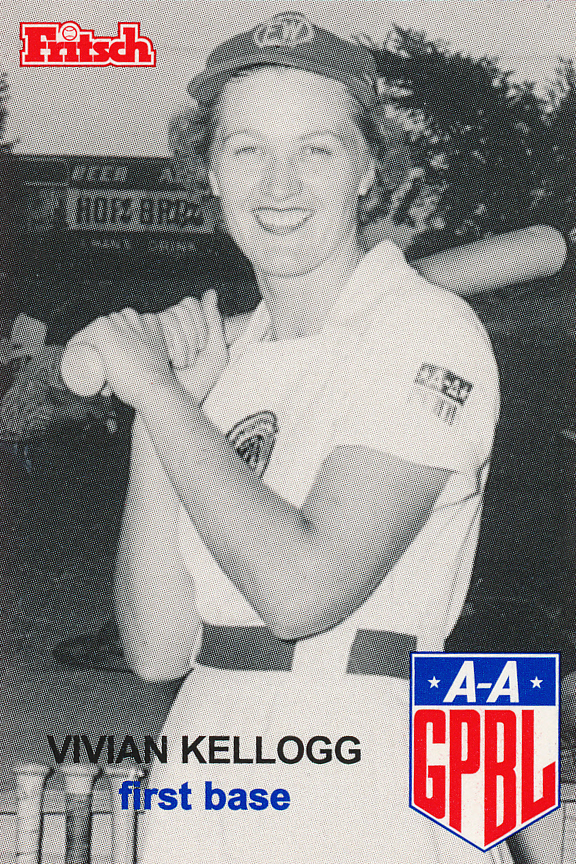 Hear about Vivian's experience in her own words through the Grand Valley State Oral history project.

Kelly as she was known, boasted one of the healthiest batting averages for the Daisies. Long rated as one of the best first basemen to ever play in the league, Kelly would grab everything in sight - good and bad. Plagued with a trick knee for several seasons, she found herself on the sidelines and her team missed her dearly. Her hobbies including flying, riding horse back riding, golf and tennis.

Kellogg, Vivian
By Joyce M. Smith
Vivian Kellogg was born on November 6, 1922, and raised in Jackson, Michigan, the town of her birth. During her formative years Kelly discovered that organized sports for young people, particularly for girls and young women, did not exist. If a girl wanted to play ball, she had to settle for the neighborhood kids, most of them boys, as teammates. Kelly grew to young womanhood playing this kind of sandlot ball. If someone had a softball, that was the game of the day. If the ball at hand was a baseball, that ball and those rules commanded. It was not until Vivian was a teenager and began to participate in Girls Athletic Association competitions that she regularly played on teams comprised of all girls.

Spreading from park districts in large cities, fast pitch softball became one of the few challenging, affordable, and visible sports for girls and young women during the 1930s and early '40s. "Kelly" wasted no time finding fast pitch teams that would help her hone her fielding and batting skills. Working her way up the ladder, she settled in with a high-caliber traveling team, The Regent Cafe, from Jackson, MI. in 1941. At the end of the 1943 season, Regent Cafe was beaten out of the area title by the Lansing Vans, a team with its eye on the state championship. Only too aware of Kellogg's power with the bat, the Vans, who were allowed to add two players to their roster, picked her up for the state tournament.

A scout for the All-American Girls Professional Baseball League, the fledgling four team league started by Phil Wrigley at the beginning of the 1943 season, was in the stands during the Michigan tournament. Wrigley wanted to expand the league to six teams in 1944, and the search was on for potentially great players, and the scout did not have to observe Kelly's playing ability for very long before he knew that she was in that category. So certain of Vivian's ability to make the AAGPBL was the scout, that he signed her to a contract before she ever tried out.

Following her post-season play in Michigan, Kelly boarded a train in Jackson and set out for the Windy City and Wrigley Field. Kelly's proficiency, both behind the plate and at first base, and her big bat assured her success at the fall, 1943 tryout. The scout had been correct. Vivian Kellogg was, indeed, AAGPBL material.

Kelly joined the expansion team, the Minneapolis Millerettes, in the spring of 1944. Plagued by bad weather, travel requirements that were too overwhelming for the time -- the closest League city was 350 miles away -- and a lack of support, the Millerettes, were doomed. For the last half of the summer of 1944, Vivian and her teammates were constantly on the road, living out of hotel rooms. They became known as the Minneapolis Orphans. Dissolution of the Millerettes was inevitable. Kellogg, undaunted by the problems presented by her first professional baseball experience, began the 1945 season as a Fort Wayne Daisy, the franchise that had taken over the Millerettes, and played first base for them until injuries forced her retirement in 1950.

Viv returned to the Jackson area at the end of her baseball career, eventually settling in the small town of Brooklyn, MI., south of Jackson. She worked as a dental receptionist, while continuing to participate in sports, such as, golf, bowling, tennis, and basketball. Her bowling prowess led to her induction into the Jackson Bowling Hall of Fame on May 17, 1992.

After her own sports career concluded, Kellogg remembered the importance of those people who had helped her learn the game as a youngster. She decided to "give something back" by becoming a little league coach. In recent years she has kept in touch with children by talking to school groups about the importance of sports and sportsmanship in developing strong character. A residence of the Village of Brooklyn, MI. since 1968, Vivian was honored by her fellow residence when The Vivian Kellogg Field was dedicated at the Little League Complex on May 1, 1994.

Painfully shy as a young woman, Vivian's baseball experience taught her self-confidence and independence. She drew strength from the friends she made as a member of a winning team and learned that she was capable of doing anything she chose to do. She has nurtured those baseball friendships over the years because she shares with the women with whom she played the game a unique experience. They were the first. Their uniqueness may have gone unrecognized for over thirty years, but they knew what they had done. When scoffers said, "Baseball? Naw, you didn't play baseball. You mean Softball." Viv often smiled a knowing smile. They could forget or they could disbelieve, and they could take the legacy away from two generations of children who never were told about the women of the All-American League, but they could never take baseball away from her.

Following the recognition by the Baseball Hall of Fame in 1988, Kelly and the other women of the AAGPBL no longer had to insist that they knew what they were talking about. Their participation in a professional league that lasted eleven years has earned them a special place in history. Just look at the sign as you enter the Village of Brooklyn, MI., Home of Vivian Kellogg, Member AAGPBL and Baseball Hall of Fame.

Acknowledgment: Biographical data supplied by Vivian Kellogg, 6/97; prepared by Joyce M. Smith and submitted to the AAGPBL web site by Susan A. Reed 3/98.

Contributed By: Susan A. Reed

Vivian (Kelly) Caroline Kellogg, Of Brooklyn, passed away December 13, 2013 at the Jackson County Medical Care Facility at the age of 91. She was born November 6, 1922 the daughter of Amelia and Klein Kellogg. Vivian was preceded in death by her parents; three sisters, Oveda (Kellogg) Littlebrant-Johnson, Fredia (Kellogg) Dalton, Loretta (Kellogg) Horsch and 3 brothers, Clarence (Kelly), Alfred (Mutt), John (Sparky), and special friend Joan Holland. Vivian is survived by many nieces and nephews and was lovingly cared for by her great nephew Allen (Bobby) Spiess Jr. and adopted nephew Tom Miller. Vivian was a member of American Legion, Wilber-Bartlett Post 315 Brooklyn, Michigan. Vivian was an avid sports player. She played profession baseball for the (AAGPBL) "All American Girls Professional Baseball League," which inspired the making of the movie "A League of Their Own." She joined the Minneapolis Millerettes, in the spring of 1944 and joined the Fort Wayne Daisies in 1945 and played first base until injuries forced her retirement in 1950. She was inducted into the Baseball Hall of Fame in 1988. She received a personal letter from President Gerald R. Ford for her outstanding record. Vivian returned to the Jackson area at the end of her baseball career, eventually settling in Brooklyn, Michigan. She worked as a dental receptionist, while continuing to participate in sports, such as golf, bowling, tennis and basketball. She was inducted into the Jackson Bowling Hall of Fame on May 17, 1992. Visitation will be Monday, December 16, 2013 from 9 AM - 11 AM at Brooklyn Presbyterian Church with funeral service following. Contributions in her memory are directed to Columbia Golden Eagle Girl Softball Program, Brooklyn American Legion Auxiliary Post 315, or Brooklyn Presbyterian Church. The family would like to thank the Jackson County Medical Care Facility staff for the excellent care they gave Vivian.