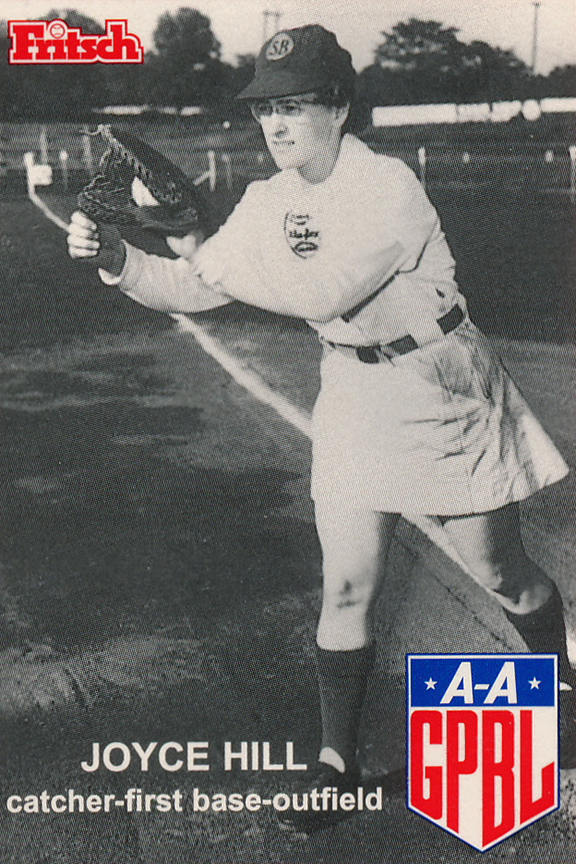 Hear about Joyce's experience in her own words through the Grand Valley State Oral history project.

Joyce  entered the league with a reputation as a softball pitcher and shortstop for the Nash Company team in Kenosha. Along the line, however, she was converted into a catcher, and she became a full-time worker in that department for the Redwings.  Joyce eventually landed with Racine and became a force behind the plate and at the plate with her ability to hit the long ball. Joyce continue to work for the Nash Company during the off-season. She had a hobby of collecting clippings from her games and putting them in scrapebooks. Joyce continues to live in Kenosha where she raised her family.

The Wisconsin Historical Society Press's newest book for young readers is out and ready for review! Here is our press release: "Joyce Westerman: Baseball Hero" (Paperback: $12.95, ISBN: 978-0-87020-486-9) tells the story of a young girl who grew up on a farm in Pleasant Prairie, Wis. As a kid, Joyce cleaned the barn, picked vegetables and helped her father cut down trees. But what she really loved to do was play baseball. She played at recess and with friends whenever she could, and she even joined her aunt's softball team when she was just 12 years old. When Joyce graduated from high school, she went to work at a factory in Kenosha. But then World War II broke out, and chewing-gum tycoon P.K. Wrigley started a women's baseball league to replace men's baseball while players were away fighting the war. Women from all over the country tried out for the All-American Girls Professional Baseball League. Only a few were good enough to make the cut, and Joyce was one of them. For eight years, she traveled around the country playing ball, even winning the league championship in her last season. This new title in the Badger Biographies series for young readers tells the story of a woman who lived her dream of becoming a professional athlete. In a time when women had few opportunities for careers, and next to none in professional sports, Joyce and her teammates proved to the world that women have what it takes.

Joyce Elaine Westerman (Hill) died on Monday, January 18th, 2021 at home with her family by her side.

Joyce was born on December 29th, 1925 to Cecil Ludlow and Lillian Victoria (Clausen) Hill and was raised on a farm in Kenosha, Wisconsin. She attended local schools and graduated from Mary D. Bradford High School in 1943. Joyce married Raymond Arnold Westerman on December 2nd, 1950 and built their first home together before starting their family in Kenosha. She received great joy and fulfilment from her two children, Janet and Judy, and her many grandchildren and great-grandchildren. She was active as a 4-H leader for 14 years, president of the 4-H leadership council for two years, active in Home and Community Education (HCE) since 1956 and President of the Executive Board for HCE. Joyce was a long-standing member of the First Congregational Church and most recently a member of the Lord of Life Lutheran Church.

Joyce played professionally with the All-American Girls' Professional Baseball League (AAGPBL) from 1945 – 1952 and continued to support the association throughout her life. She started her baseball career as a catcher with the Grand Rapids Chicks, going on to play for the Peoria Redwings, and the Racine Belles. She played first base with the South Bend Blue Sox the last few years and won a championship. Following her professional baseball career, she continued her love of the game by playing in the local city and county softball leagues. She also worked for the United States Postal Service and American Motors.

In 1988, Joyce and all the other players of the AAGPBL were recognized in the Baseball Hall of Fame in Cooperstown, New York. In 1991, the league was honored in the movie, "A League of Their Own". Joyce participated in the movie along with forty-eight other original AAGPBL baseball players. Other awards and honors bestowed upon Joyce included being inducted into the Old Timers Baseball Association of Chicago in 2000, the Grand Rapids Sports Hall of Fame in 2003 and the Milwaukee Brewer's Wall of Fame. In 2011, Bob Kahn wrote and published a biography about Joyce's life called, "Baseball Hero: Joyce Westerman". In addition, Joyce was the assistant coach of Women's Softball at Carthage College for four years, coached softball in Milwaukee for six years and was a strong supporter of all high school and college athletics.

Funeral services for Joyce were held on Saturday January 30th, 2021 at 10:00 A.M. at Great Lakes Church (7600-75th Street, Suite 220, Kenosha WI 53142). Visitation with the family was held on Saturday January 30th, 2021 at the church from 9:00 A.M. until the time of services. Burial followed the service and was private.
To honor Joyce, the family asked that attendees attire themselves in their favorite Green Bay Packers clothing.
Funeral Arrangements by Casey Family Options Funerals and Cremations.