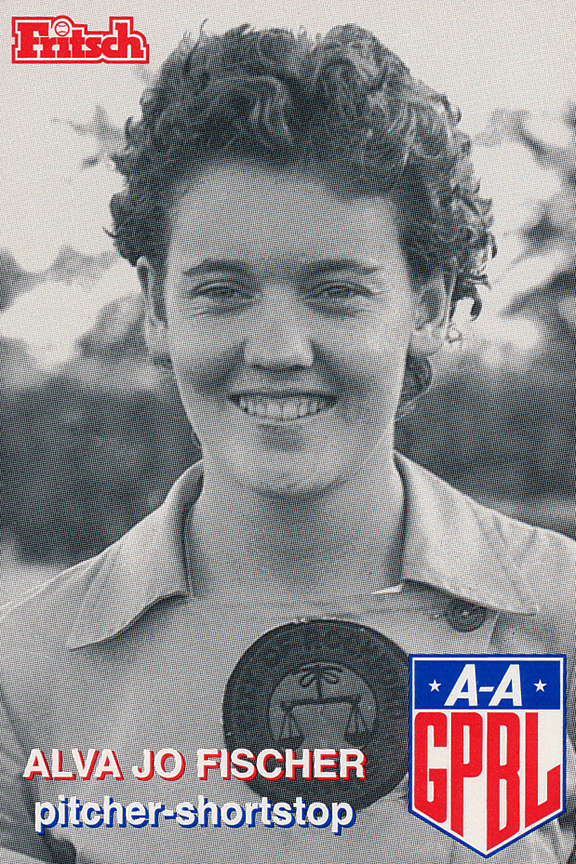 Alvo Jo "Tex" was inducted into the Texas Sports Hall of Fame during the AAGPBL Reunion in Huston. Helen Filarski Steffes a former team mate of Tex accepted the honor for Tex. As a hitter she could really drive the ball and she also did a great job on the mound. She was part of the Peaches team that won the championship in 1945. Tex's determination, poise and ability made her a fan favorite in the cities that she played in. In Muskegon, Manager Wamby moved Tex from the mound to shortstop where she was able to use her great throwing arm. After a couple of seasons Tex became one of the best SS in the league. She loved dancing to swing music and collected records. In 1975 Alva Jo had "The Alva Jo Fischer Softball Complex" in San Antonio named after her.

Fischer was born in San Antonio, Texas, and played for the all-state team at first base in 1938. She entered the All-American Girls Professional Baseball League in 1945 with the Rockford Peaches, playing for them one year before joining the Muskegon Lassies for the rest of her five-year career.

Nicknamed “Tex” by her teammates, Fischer was used primarily as a pitcher, but later became a highly competent shortstop as well. In her rookie season, Fischer posted a 4–7 record with a 3.77 earned run average and 98 innings of work in 16 pitching appearances.

The Peaches, managed by Bill Allington, won the regular season title with a 67–43 mark. They increased their dominance during the postseason, when they defeated the Grand Rapids Chicks three to one in the best-of-five first round games, and claimed the championship by defeating the Fort Wayne Daisies four to one in the best-of-seven series. In the final series, Fischer hurled three shutout innings of relief.

When Fischer joined the expansion Lassies in 1946, the team's manager, Buzz Boyle, experimented with her at shortstop, where she was able to use her great throwing arm while sharing duties with Dorothy Stolze. She also contributed with an 11–16 pitching record and a 2.77 ERA in 29 games. Fischer became the everyday shortstop for Muskegon in 1947. While adapting to her new role, Fischer did not pitch during the season. She committed 58 errors in 586 chances for a poor .901 fielding average, and batted only .202 in 112 games. Muskegon clinched the championship with two days remaining on the regular schedule and advanced to the postseason, only to be defeated in the best-of-five first round by Racine, three games to one.

In 1948 Fischer improved at shortstop, showing excellent range and lowering her error rate (36) compared to the previous year and raising her fielding average to .917. She also returned to pitch and went 9–7 with a 1.47 ERA in 21 appearances, while hitting .252 with 31 runs and 36 RBIs in 107 games. In addition, her ERA was the ninth best in the league. Muskegon was upset by Fort Wayne in the best-of-five first round play-off games, three to two. Fischer was charged with one of the losses after allowing one run and five hits in six innings of work.

Fischer enjoyed a career year in 1949, her last season, when she became the best shortstop in the league with a .972 average and only 23 errors in 481 fielding chances while turning in 48 double plays. She batted only .198 in 109 games, but posted a 10–7 record with a 1.78 ERA and a career-high 86 strikeouts in 25 games pitched, ending eighth in the league for the most strikeouts. Muskegon swept Kenosha in the first round games, two to zero, but lost the second round to Grand Rapids, three to zero. Fischer shutout Kenosha with a four-hit, 3–0 victory in Game 1 of the best-of-three series. She then labored through 13 innings to Grand Rapids in the next step, allowing twelve hits and four earned runs, but did not have a decision.

Fischer died of leukemia in San Antonio, Texas, August 13, 1973 at the age of 47. Fifteen years after her death, she became part of Women in Baseball, a permanent display at the Baseball Hall of Fame and Museum at Cooperstown, New York, which was unveiled in 1988 to honor the entire All-American Girls Professional Baseball League.