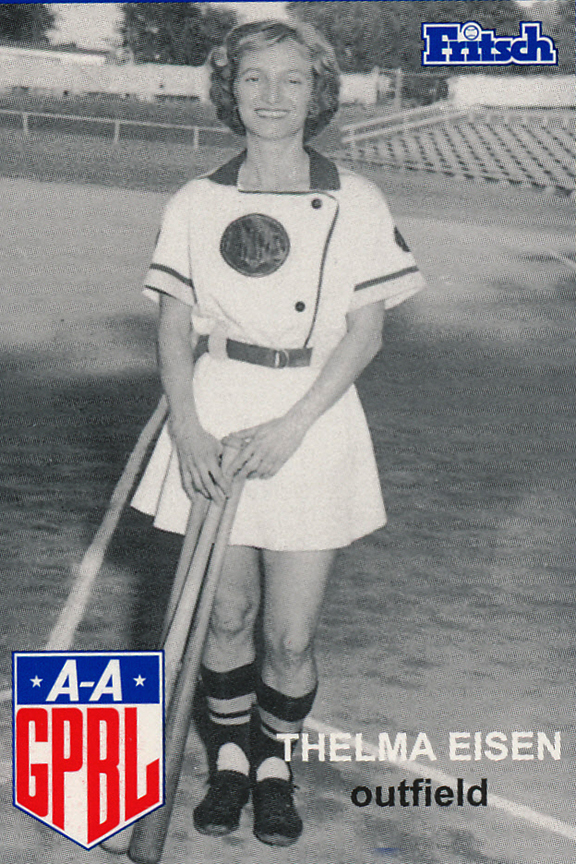 Tiby Eisen was a fine centerfielder who had great speed and a solid bat. Eisen was an All-Star in 1946.   After brief stints with with the Grand Rapids Chicks and Peoria Redwings, she was assigned to Ft. Wayne and became a key outfielder for the Daisies. She helped coach the Daisies during the last half of the 1948 season.Her wealth of experience was invaluable to her younger teammates and her team. She made a fine lead-off hitter because of her speed and her ability to steal bases. She also did a fine job of moving runners into scoring position.  In addition, she played on one ofthe teams that toured Central America, Venezuela, and Puerto Rico during the winter of 1949.

It’s not surprising that Thelma “Tiby” Eisen had memberships at three golf courses and took tai chi lessons in her spare time. Tiby competed in a wide variety of sports throughout her life. She played football for the legendary Jim Thorpe, softball for the Amateur Softball Association Champion Orange Lionettes, and field hockey for the Shamrocks of the California Field Hockey League. From 1944 through 1952, she was an all-star caliber centerfielder in the All-American Girls Professional Baseball League, earning a reputation as a fleet runner with a talent for stealing bases and stretching singles into extra-base hits.

In the business world, Tiby spent 10 years as a calibrated technician with Stratham Instrument Company, followed by 17 years at GTE, where she became the company’s first female PBX technician. As a member of the Native Daughters of the Golden West of California, Tiby gave baseball clinics for children through a number of non-profit organizations for many years. She is featured in Jewish Women in America: An Historical Encyclopedia by Paula E. Hyman, and was inducted into the Jewish Sports Hall of Fame in Commack, New York. Tiby lived in Pacific Palisades, California.

Thelma "Tiby" Eisen was in a league of her own. She quietly passed away on May 11, 2014 on her 92nd birthday. She played professional baseball from 1944 to 1952. She was a member of the Jewish Hall of Fame in Cooperstown, NY. She was also with the Native Daughters. She loved people and life. She always lived life to its fullest and was a very positive person. She will be greatly missed by her family. She lived in Santa Monica, Palm Springs, and Pacific Palisades, CA for her 92 years. No services were held as shewas cremated. Condolences:please email [email protected]