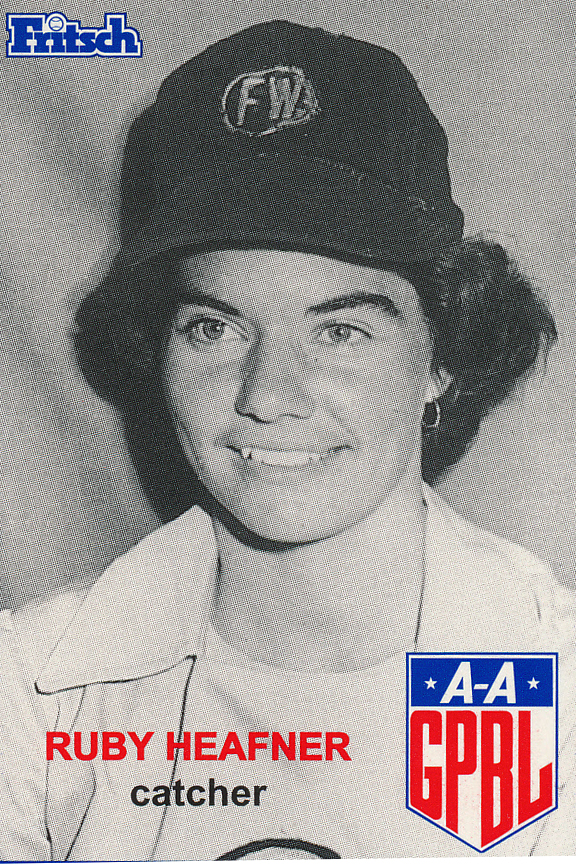 Ruby was born into a very athletic family of eight children--four boys and four girls.

Ruby began playijng softball in her hometown at the age of 10.  She played fast pltch on the same team as her sister.  They played 6 days a week.  The women organized a league, and Ruby was offered money to play on the men's team, but she declined

Ruby served in the armed forces  for the Air Force in Virginia.

In 1946, Ruby joined THE AAGPBL with the Rockford Peaches and established herself as a valuable catcher and clutch hitter. She recalls her joy at catching for Vivian Kellogg and playing with Edie Perlick and Sophie Kurys and many others for whom she had great respect.

The Daisies had a wizard behind the plate on defense but she also had her share of hits many coming with runners on base.

She was a native of Gaston County, born March 5, 1924, daughter of the late Robert Monroe and Nancy Hilderbrand Heafner.

She was a World War II veteran, having served in the Womens Air Corp. She retired from Boeing Aircraft in Long Beach California.

Ruby started a baseball career with Dixon and AYP in Mount Holly. She then played baseball as a catcher with the All-American Girl's Professional Baseball League from 1946 – 1951, which was depicted in the movie "A League of Their Own," including teams from Rockford, Fort Wayne, Racine and Battle Creek. She was inducted into the Baseball Hall of Fame in Cooperstown, NY and in 2008, the Gaston County Sports Hall of Fame. Her favorite pastime was reading the Bible. Family and friends will miss her and cherish all the fond times.