Mike was the Bat boy for the Racine Belles in 1943 and a devoted Associate member until his death in 2015. 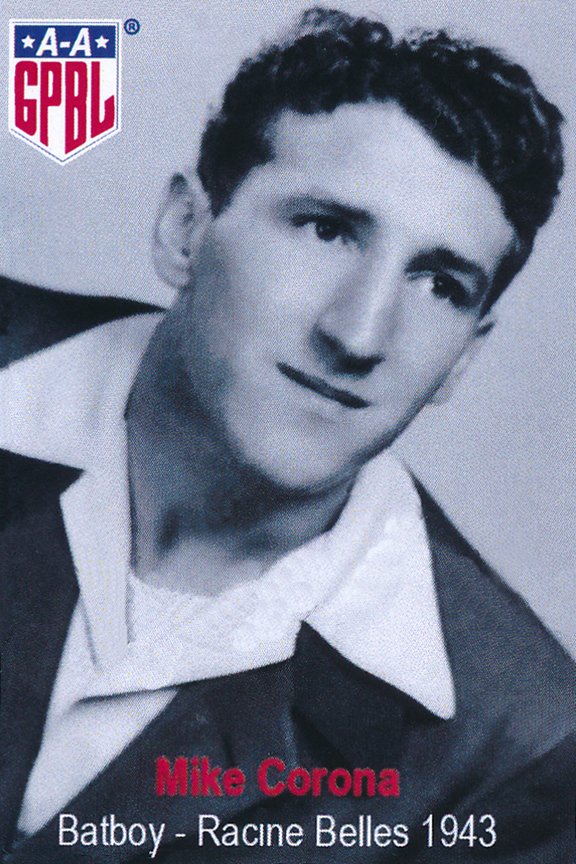 Mike was the Bat boy for the Racine Belles in 1943 and a devoted Associate member until his death in 2015.

By Mike was the Bat boy for the Racine Belles in 1943 and a devoted Associate member until his death in 2015.

Hear about Mike's experience as a bat boy in his own words through the Grand Valley State Oral history project.

Michael was a graduate of Wm. Horlick High School, “Class of 1947”. On May 27, 1950 at Sacred Heart Catholic Church, he was united in marriage to Carol Eickhorst who preceded him in death on April 18, 2014. Mike and Carol were longtime and active members of St. John Nepomuk Catholic Church.

Mike was employed by Belle City Malleable-Racine Steel Co., as a core maker, for 31 years until his retirement in 1978. From 1978 until 1994 he was hired as the labor liaison and public relations director by Wisconsin employers Group Insurance Co. He then was employed as a Labor Consultant for American Medical Insurance Company until his retirement in 1999.

Politically minded he served as a board member of the Racine County Democratic Party from 1949 until 1955, and Chairman of the Racine- Kenosha UAW Cap. & Pac. Committee from 1972 until 1984. He also was an elected delegate to the United Auto Workers Convention from 1970 until 2002. From 1976 until 1980 he was elected “Delegate to the National Democratic Convention” (NY). From 1972 until 1984 he served as Legislative UAW State Cap. & Pac Comm. (Wash. D.C.). In 1978 Mike was privileged to have a meeting at the White House Oval Office with President James Carter on Japanese import and export cars to the United States. In 2008 he received the “James Arena Democratic Award.

Mike was a proud recipient of many awards while actively involved in community service including: UAW 553 as Union Stewart, member of bargaining committee, financial secretary/treasurer, recreational chairman, and chairman of the Retirees Chapter. UAW Member of Dr. Verontks labor management committee- St. Mary’s, UAW Member – United Way Committee, United Way solicitor in the plant- union member appointed in 1977 by Governor Martin Schrieber to serve as a labor member on the new court of appeals committee, Madison, WI, Appointed in 1972 by Mayor Steve Olson to serve on the Park and Recreation Committee serving for 24 years. March 4, 1996 Mayor Owen Davies proclaimed this day “Mike Corona Day”. He was the chairman on the Racine Joint Labor Day Committee and Proclaimed “Labor Person of the Year” in 1988. He was a Racine Labor Board Member for twelve years and was the President of the Racine Labor Center Association.

An avid sportsman, Mike was the first bat boy for the Racine Belles of the All American Girls Professional Baseball League and has been a charter member since 1991 of the AAGPBL Players Association. Mike was a member of the Wisconsin State Softball Champions, from 1954 until 1960, and received the MVP award in 1954 at the state tournament. From 1968 until 1984, Mike was the sports director UAW Region 10 and regions umpires Assoc for 13 years. He was the Secretary of the Belle City Malleable UAW bowling league for 44 years, the league is now known as the “UAW – Mike Corona League”. He was elected to the Racine Bowling Association’s Hall of Fame in 2004. He also was a Four Letter winner at Wm. Horlick High School from 1945 through 1947.

He was instrumental in forming the state UAW Golf and Bowling tournaments in Wisconsin and continued to facilitate these events for many years.

Very proud of his Sicilian heritage, Mike served as the President of Roma Lodge in Racine for many years. He was selected as a delegate to the International Convention of The Sons of Italy in New Orleans.

Above all he valued and cherished time spent with his family. Also traveled the U.S. and abroad extensively for work and pleasure throughout his life. Many of these trips included visiting family and friends. His greatest joy was being the number one fan of his grandchildren’s sporting events and recitals. He was loved dearly and will be greatly missed.

A Mass of Christian Burial was celebrated Friday March 27, 2015, 11:00 A.M. at St. John Nepomuk Catholic Church, 1903 Green St. with Rev. Richard Molter officiating. Private interment was held at Holy Cross Cemetery, Hwy 32. Relatives and friends met with the family on Thursday, March 26th from 4:00 until 7:00 P.M. at the funeral home and on Friday at 10:00 until time of Mass at the church. Memorials to The All American Girls Professional Baseball League, c/o Jill Reitjens Treasurer, 1245 Del Mar Dr. Los Osos, CA 93402, have been suggested by the family.

A special thank you to Dr. Mark DeCheck, and all of his care givers at Ridgewood and Hospice Alliance for their loving and compassionate care.