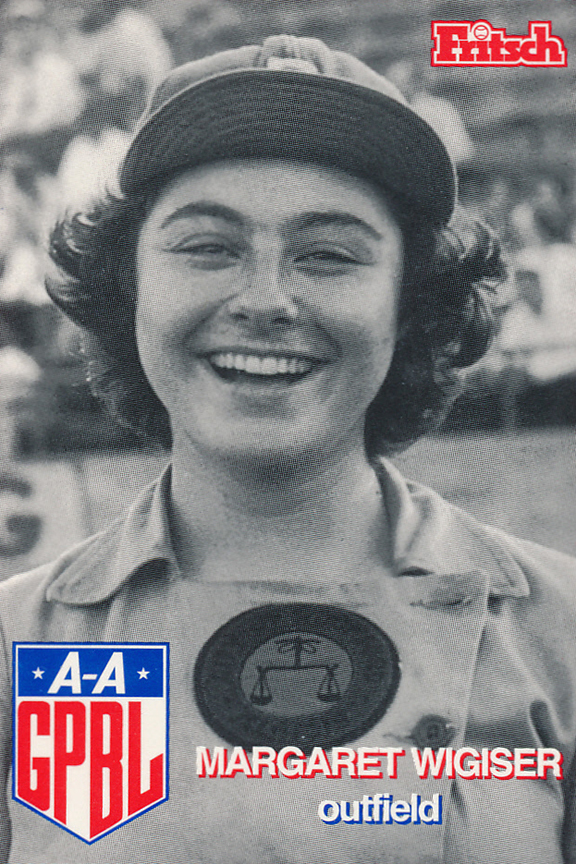 Margaret was a stalwart in centerfield who also had some sock in her bat. Her first team was the Minneapolis Orphans and then she moved to the Peaches in 1945 helping them to a championship.  She graduated from Hunter College in NY with a degree in physical education. She also enjoyed photography.

Margaret Wigiser, 94, passed away peacefully on January 19th, 2019. Margaret was a caring friend, a dedicated and accomplished educator, and an athlete all of her life.

Margaret was born in Brooklyn December 17, 1924 and graduated from Seward Park H.S. and Hunter College in New York City. Throughout her professional career as a physical education teacher and administrator, Margaret was truly a mover and shaker, playing a major role in providing gender equality for girls' sports programs.

While still in college, Margaret was recruited and played professional baseball in the All-American Girls Baseball League. She played center field on the 1945 Rockford Peaches championship team, as depicted in the popular movie "A League of Their Own." As a result, she deservedly earned a place in the Baseball Hall of Fame in Cooperstown, NY. [Margaret played with the Minneapolis Millerettes in 1944 and she also played with the Peaches in 1946.]

During her many years as a physical education teacher and administrator in the NYC public schools, she mentored many young teachers who, along with Margaret, fought for, initiated, and developed the Girls' Interscholastic Program as Director of the Girls' Branch of the PSAL. Agitated by the lack of opportunity for girls to participate in interscholastic sports in NYC, she paved the way for thousands of NYC high school girls to participate in organized athletics.

Upon retirement, Margaret moved to Florida and as an accomplished golfer and organizer, she continued her leadership role as an active member of her community.

She is predeceased by her parents, Pauline and Henry Wigiser, two sisters, and a long time partner of over 60 years, Dorothy Tocci. She will be missed by her many friends, former colleagues and family.

A funeral mass was conducted on Wednesday, February 6th at 2:00 pm at St. Christopher's Church in Hobe Sound, FL.

Donations in her memory can be forwarded to GIRLS ON THE RUN INTERNATIONAL, 801 Morehead Street, Suite 201, Charlotte, NC 28202