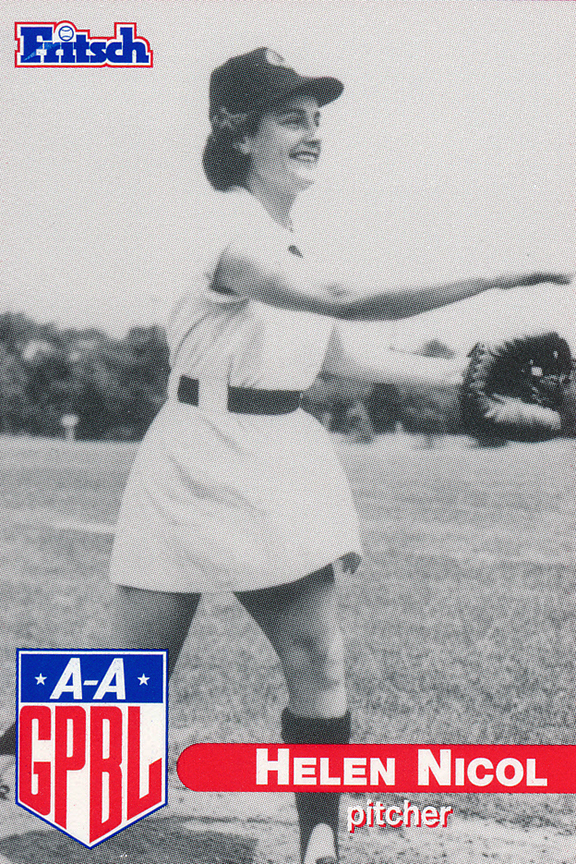 Helen M. "Nickie" (Nicol) Fox, age 101, of Scottsdale, Arizona passed away on Sunday, July 25, 2021. Helen was born on May 9, 1920 in Alberta, Canada. "Nickie” was a pitcher in the All-American Girls Professional Baseball League that existed from 1943 to 1954. She played for both the Kenosha Comets and the Rockford Peaches. She was one of the league’s greatest pitchers, holding several all-time records, including 163 wins and 1,076 strikeouts.

Helen Nicol Fox was an Edmonton department-store clerk when lured south to play baseball in what was billed as the Glamour League.
The 23-year-old right-hander quickly emerged as a star pitcher in the All-American Girls Professional Baseball League. She pitched for 10 seasons in the pro circuit, based in the American Midwest.

Interest in her athletic career and in the forgotten league was revived in 1992 with the release of the Hollywood drama, A League of Their Own, starring Madonna, Tom Hanks and Geena Davis. The attention led to overdue recognition of the exploits of ignored female pioneers of pro baseball, as several, including Ms. Fox, were belatedly enshrined in sports halls of fame.

Ms. Fox, who died in Arizona in July at 101, thrived in the league even as the rulebook evolved from playing softball to baseball with a smaller ball, farther pitching distance and a demanding change over the years in the pitching delivery of the ball.

“She had to be very athletic and very committed to the game, especially to make the transition from underhand to overhand, and to do it well,” said sports historian Merrie Fidler of Trinidad, Calif., who has written a history of the league.

“She had speed and control. She was outstanding.”

Helen Margaret Nicol was born on May 9, 1920, in Ardley, a hamlet in central Alberta about 185 kilometres north of Calgary. She was the middle child and only daughter born to the former Elizabeth May Dunn and Alexander Nicol, who both immigrated to Canada from Scotland in 1910.

While attending Connaught School in Calgary, she skated for the Avenue Grills, a hockey team sponsored by a local café, leading the women’s city league in goal scoring. She was also a top provincial speed skater, yet it was on the softball diamond where she excelled.

First recruited at 13 by a senior team, she became Alberta’s top softball pitcher before her 20th birthday. She once struck out 23 Mannville (Alta.) Merrymakers batters in a 1940 playoff game. She pitched for several teams, notably including the Calgary Chinooks and Edmonton Army and Navy Pats. In 1942, she won the deciding game of the Western Canadian championship at Moose Jaw, Sask., while pitching for the Edmonton Walk-Rites.

In 1943, chewing-gum magnate P.K. Wrigley, owner of the Chicago Cubs, organized a professional softball league for women. About 100 players from across the continent were invited to tryouts at Wrigley Field. Johnny Gottselig, an NHL player for the Chicago Black Hawks who in summer coached softball in Regina, scouted the Canadian Prairie sandlots for likely recruits and 11 were invited. For Ms. Fox, it was her first visit to the United States. She passed the test and was assigned to the Kenosha (Wisc.) Comets with a contract promising a princely $85 a week.

The 5-foot-3, 130-pound pitcher was described by the local newspaper as “a handsome brunette, dark-brown hair, violet-blue eyes, and a most charming personality … a refreshing outdoor girl.”

The circuit was called the Glamour League in part because spring training included evening charm school classes, as representatives of the Helena Rubinstein Beauty School taught etiquette to players who were also given instruction in posture, deportment and even the application of makeup. Each team had assigned to it a chaperone. Instead of traditional wool flannels, players wore one-piece, short-skirted flared tunics, the uniforms leaving legs exposed to bruising and scraping when sliding.

“When we first saw those outfits, we just nearly died,” Ms. Fox told the Arizona Republic two years ago.

She became an immediate fan favourite in the Wisconsin city.

“I have always enjoyed playing softball more than anything else and dreamed of someday spending an entire summer vacation doing just that,” she told the Kenosha Evening News early in the first season. “But to be paid for doing it and be given such a wonderful trip all the way from Calgary to Kenosha still seems like a page torn from a fairy-tale book.”

She recorded an impressive 31-8 won-loss record to help the Comets win the league pennant in the inaugural season. Ms. Fox led the league in several pitching categories, including victories, win percentage (.795), earned-run average (1.81), games pitched (47), innings pitched (348) and strikeouts (220). She was chosen league pitcher of the year.

She again won pitcher-of-the-year honours in the league’s sophomore campaign with a 17-11 record and a miserly 0.93 earned-run average.

The rulebook changes from underhand to sidearm to overhand ended her brief era of dominance, though she was one of the rare pitchers able to adopt to the changes.

Ms. Fox retired after 10 seasons split between the Comets and the Rockford (Ill.) Peaches. When the circuit ceased operation after the 1954 season, she held career league pitching records for games (313) and innings pitched (2,382), as well as strikeouts (1,076). She was also the career leader in wins (163) and losses (118). The 13 consecutive victories she recorded in 1943 went unmatched.

She stayed in Kenosha to work for Motorola and the American Motors Corp.

In 1972, she moved to Arizona, where she won several golf tournaments.

On her 101st birthday in May, she received a video greeting from Tom McNamara, the current mayor of Rockford, who acknowledged her “indelible impact on the city of Rockford and the Rockford Peaches.”

Ms. Fox, who was nicknamed Nickie in her playing days, married Gordon Fox, a corporal with the Royal Canadian Air Force, in Calgary in 1945. The union was short-lived.
She died July 25 at the Hospice of the Valley in Phoenix.

Ms. Fox was inducted into the Alberta Sports Hall of Fame as a multisport athlete in 1996. Two years later, she was among the 68 Canadian-born veterans of the All-American league enshrined in the Canadian Baseball Hall of Fame in St. Marys, Ont.

She is also one of 95 players with the Army and Navy Pats team honoured by the Softball Alberta Hall of Fame in 1987. She had been a clerk with the Army & Navy department store in Edmonton when recruited to the pro league.