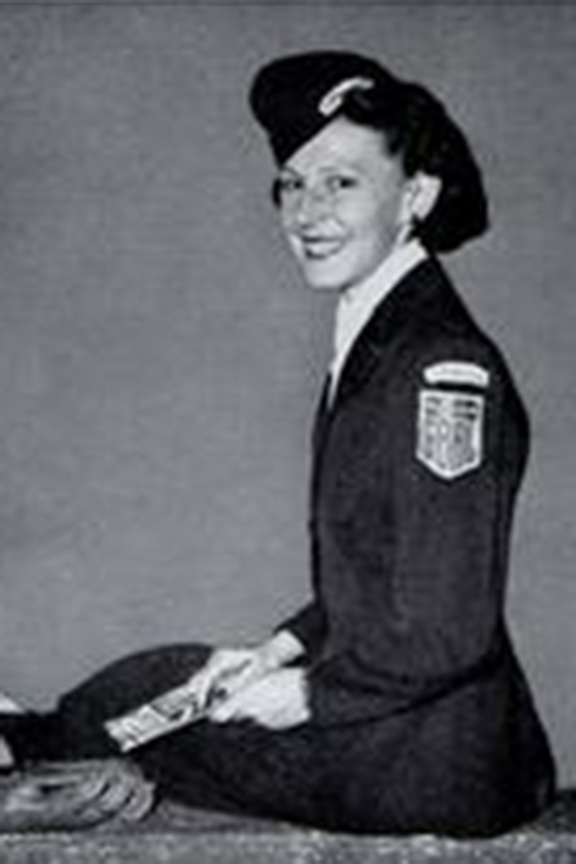 Helen Hannah Campbell has been there and done that. Born in 1916, her mind, eyes and tongue are still sharp, and getting sharper all the time. Her passport is stamped with Australia, Italy, Bangkok, Tahiti, Yucatan and many more. After a few minutes in her company, you'd wonder what Helen hasn't already done. Instead of world-weary, this wonderful woman is world-wise and ready for the next adventure.

Though she's a retired Marine master gunnery sergeant with a 32-year career, she still volunteers nearly full time for the Corps. Rarely home, this veteran of three wars, keeps busy. She patrols the California city of Fountain Valley as a police department senior volunteer, does odds and ends at the El Toro Marine Air Station, works as a docent at the Richard Nixon Library and recruits new members for the Women Marines Association when she's not traveling to Japan or Russia. Between parasailing and hot-air ballooning, Helen never slows down, except to share her wonderful stories of a still exciting life.

Helen went to high school with Richard Nixon and then to Woodbury College. After earning her degree in business administration with a secondary journalism degree, she worked her way up in a defense plant. Without room for promotion, Helen upstaged her restrictive manager in 1943 by enlisting in the Marine Corps. "In those days your boss had to give you an availability certificate so you could out and look for another job and he wouldn't give me one. So I went down to the recruiting stations," says Helen. When I said 'Look at this' and showed my enlistment papers, he almost had a fit.

Helen reported to boot camp in North Carolina and then to her first duty assignment at the Marine Corps Air Station El Toro in Santa Ana, Calif. where she worked for the aviation supply quartermaster.

"The overall scope of my work was administration and paperwork. Those years were fun. It was disastrous because you knew what was happening to the boys, but it was a good job. It was a good career and I've never regretted a minute of it," states Helen proudly.

Helen completed her enlistment in 1946 and joined the Marine Corps Reserves. The next five years brought new challenges and rewards for her.
"My father was a professional baseball player for 30 years. They called him "Truck" Hannah because he was big and slow. He played for the Yankees after World War I and played with Babe Ruth. That's how I got tangled up in baseball," claims Helen.

"Tangled up in baseball" means that Helen sold her business in Beverly Hills and became a chaperone in the All-American Girls Professional Baseball League(inspiration for the movie A League of Their Own).

"They were a good bunch of ball players," recalls Helen. "They were athletes. (Chaperones) became surrogate mothers to them. You arranged their housing, uniforms, got their paychecks, arranged the buses. But they really accepted me more like a buddy. If they wanted to go out and get a burger and a beer, I'd go with them."

Helen stayed with the team until the Korean War, when she was recalled to active duty for the Marine Corps. She retired in 1975, after losing two husbands - one in the Korean War and one in Vietnam, and remained close to the Corps as a civilian worker on the air station.

"The Marines were the last to take women because the commandant didn't want skirts with his male Marines. But we showed 'em," smiles Helen. "For the ladies that followed, they have so much more than we had. They have 225 (job) possibilities and we only had 30. Back then, you couldn't be married or pregnant. Now they have child care centers all over the place and encourage married women and men to stay on the base. Now that I look back on it, we went down the path first and opened up a lot of doors to the young women that came behind us."

Campbell, Helen Hannah, age 97, born September 25, 1916, in Salt Lake City, Utah, passed away of natural causes on March 24, 2013 in Lake Forest, California. Helen was one of the first women in Los Angeles to enlist in the Marine Corps during WWII and retired after 32 years of service in 1975 with the rank of Master Gunnery Sergeant E-9. Helen attended boot training at Camp Lejeune, NC, and her first duty station was El Toro in July 1944 and, ironically, her last duty station 32 years later when she retired.

Helen's father, James "Truck" Hannah was a professional baseball player and that got her into the All American Girls Professional Baseball League (AAGPBL) which was inducted into the Baseball Hall of Fame in 1988. Helen was the last living AAGPBL chaperone. She also served on the Pacific Coast League Historical Society Board of Directors and was a member of the California Angels Booster Club and Anaheim Stadium. Helen was a docent at the Richard Nixon Library and Museum and could boast of attending Whittier High School with him. Helen resided in Fountain Valley, CA for over 45 years and was very active in her community. She was a of Retired Senior Volunteers at the Fountain Valley Police Department.

Helen was preceded in death by her parents, James and Helen Hannah.

In lieu of flowers, the family requests a donation in Helen's name be made to the WMA, WIMSA or AAGPBL.

Interment [was] at Arlington National Cemetery in Washington D.C.