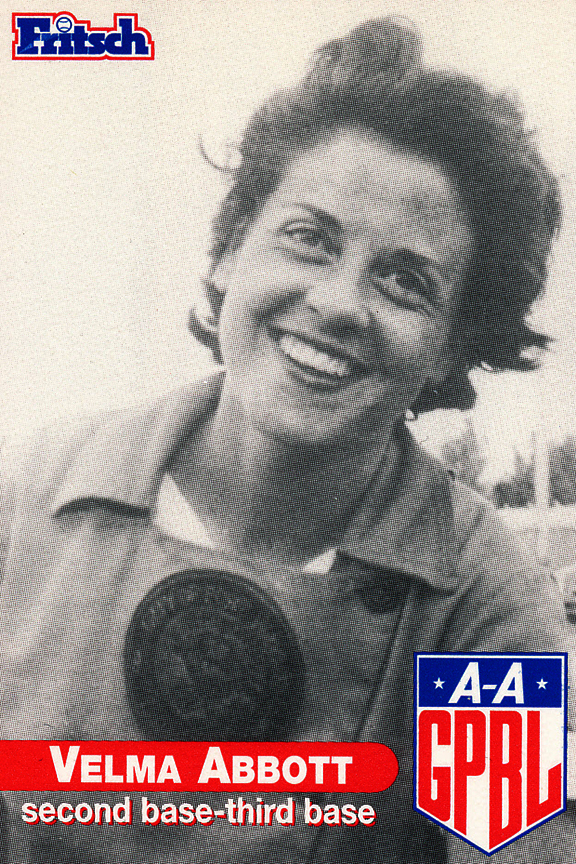 Abby played with the Alameda,CA girls softball team and was a key component of that team in capturing two World Championships in 1938 and 1939.  She was recruited by the AAGPBL in 1946 and was moved around the league that year playing for three different Clubs.  In 1947 she was assigned to the Fort Wayne Daisies where she really got the opportunity to show she was not only a clutch hitter, but had a sure hand with the glove at second base.  Abby led the league that year for 2nd basemen with a fielding average of .978. Her favorite hobbies are sculpturing and modeling in clay.

Flora Velma Abbott was a utility infielder who played in the All-American Girls Professional Baseball League. Listed at 5' 2", 110 lb., she batted and threw right-handed.

A native of Regina, Saskatchewan, Abbott was one of the sixty-four girls from Canada who played in the All-American Girls Professional Baseball League during its 12 year history. A light-hitting reserve player, she was able to play at second base and third and showed speed on the bases, while playing for four different teams in a span of two years.

Before joining the league, Abbott played in California with the Alameda Girls, a twice World Champion in amateur softball. She entered the AAGPBL in 1946, dividing her playing time between the Kenosha Comets, Peoria Redwings and Rockford Peaches. She posted a collective .178 batting average in 52 games, driving in five runs while scoring 15 times. Abbott opened the 1947 season with the Fort Wayne Daisies, playing for them as a regular at third base. She hit .141 with 27 runs and 15 RBIs, including 18 stolen bases and her only career home run.