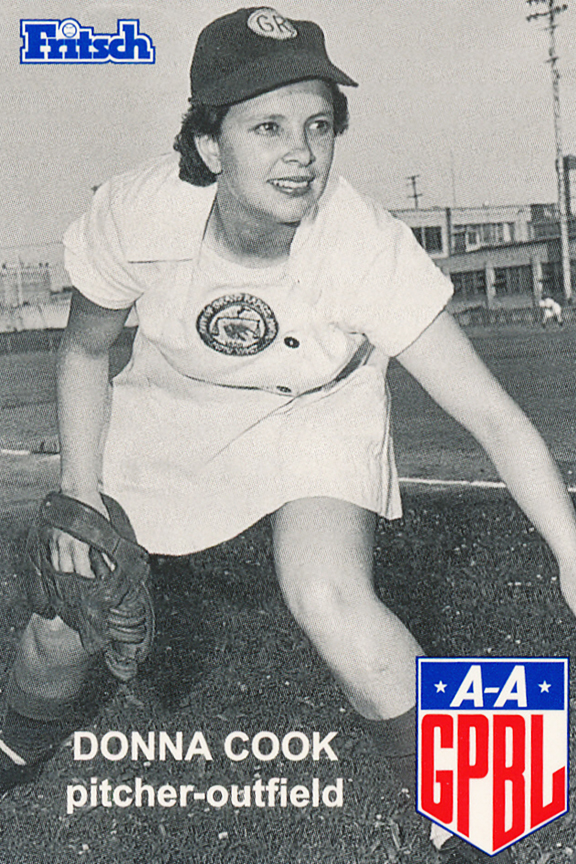 Donna Jean “Cookie” Cook passed away at Hillcrest Nursing Center on October 16, 2006 at the age of 78.  Donna was born in Muskegon, MI on May 24, 1928 to Sidney M. and Daisy (Johnson) Cook.  She retired from Comerica Bank after 25 years of service as a bank teller.  Donna played professional baseball for eight years in the All-American Girls Professional Baseball League, joining the Muskegon Lassies in 1947.  She ended her career with the Rockford Peaches in 1954 when the league folded.  Her name is among the AAGPBL players listed in the Women in Baseball Exhibit at the National Baseball Hall of Fame in Cooperstown, NY, and she was inducted into the Muskegon and Grand Rapids Halls of Fame.  Donna was named the top girl athlete of her graduating class of Muskegon Heights High School in 1947 and was also well known in the local bowling association.  Donna was one of twelve children.

Donna played rightfield for her hometown Lassies and even came into games for the Lassies as a relief pitcher and later as a starting pitcher. Her sister Doris also played in the league.