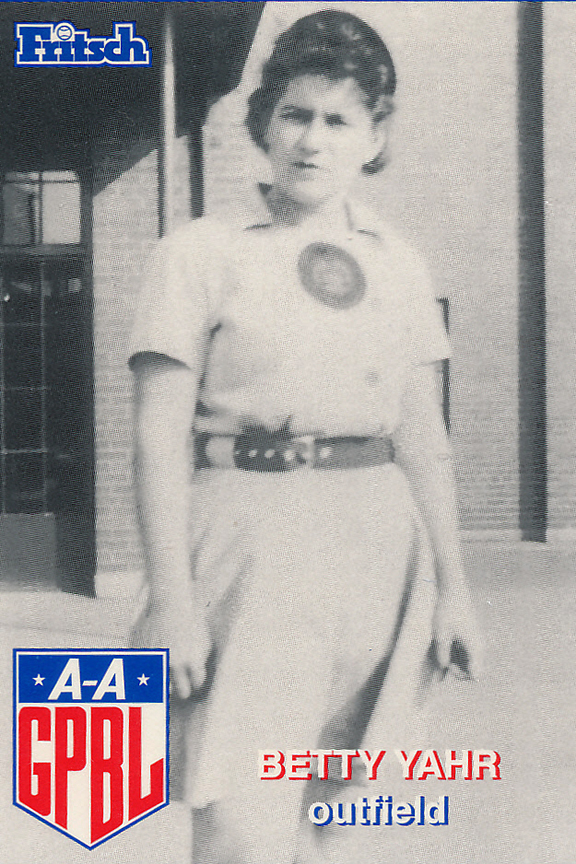 Betty was born April 22,1923 to William A. Yahr and Agatha B. Yahr.  Her parents and younger brother Robert W.Yahr preceded her in death.

Betty’s athletic career began on the sandlots of Ann Arbor, progressing through high school as a recognized member of the Girls Athletic Club, graduating in 1941.

Betty played baseball for the Rockford Peaches of the AAGPBL in 1946 as a right fielder. Her scouting report, contract, pay stubs, baseball glove, and team hat, along with other memorabilia were donated to the National Baseball Hall of Fame in Cooperstown, New York. These items are located in the Museum and Library.  After professional baseball, she played for a local semi-pro team, Dad’s Root Beer, and continued coaching and playing recreational ball..

When Betty returned to Ann Arbor after professional baseball, she worked for a brief period of time at King-Seeley before completing a life long 41 year, 5 month career with Edwards Brothers Lithographers Incorporated.

Her two favorite sayings were “We saved baseball"--The men went to WWII and Wrigley organized the AAGPBL to fill in for men’s baseball. The second, “There is no crying in baseball."

Holding to her saying, Betty Ruth passed comfortably, quietly, without a tear, and with family members at her side.

The Family wishes to express thanks to the nursing and support staff at Superior Woods Assisted Living for the loving care and final special handling of AB (Aunt Betty) as well as the Southern Care Hospice nurses who aided in final assistance and guidance.