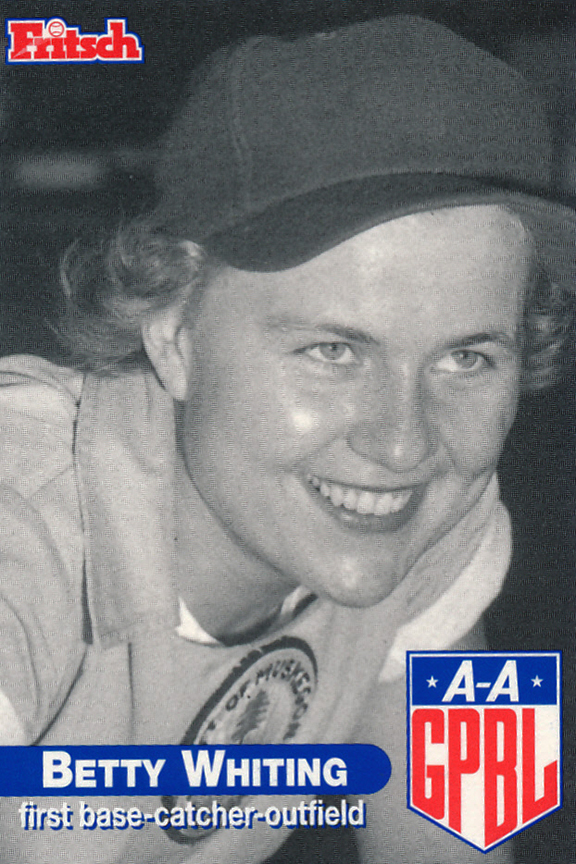 When the 1947 Allocation Day arrived in Havana, Cuba during the spring training program, one of the best acquisitions made by Ft. Wayne was this smooth-working, former GR Chicks first baseman. Betty was especially impressive on the 1947 southern tour, handling chances at first base with ease and getting timely hits. She was also equally at home in the outfield.

Elizabeth Jane “Betty” Whiting was born in Ida, Michigan, and she was a valuable utility player in the All-American Girls Professional Baseball League, playing mainly at first base for seven different teams in a span of nine seasons. She joined the league in 1944, as starting shortstop for the Milwaukee Chicks. After that, Whiting played through 1952 for the Grand Rapids Chicks, Fort Wayne Daisies, Chicago Colleens, South Bend Blue Sox, Kalamazoo Lassies and Battle Creek Belles, for whom she also caught and played outfield.

Her most productive season came in 1952, when she posted career numbers with a .231 batting average with 79 hits, while driving in 28 runs and scoring 38 times in 104 games. She also led the league in being hit by pitches in two years.  In 1946 she committed only 13 errors at first base to lead all first sackers in fielding average (.989).  A member of the 1944 Milwaukee championship team, Whiting also appeared in four post seasons (1945 & '46, 1948 & '49). In 1988, she became part of Women in Baseball, a permanent display based at the Baseball Hall of Fame and Museum in Cooperstown, New York, which was unveiled to honor the entire All-American Girls Professional Baseball League.

Whiting died February 10, 1967, in Battle Creek, Michigan at the age of 41, when she fell down the stairway to her cellar.