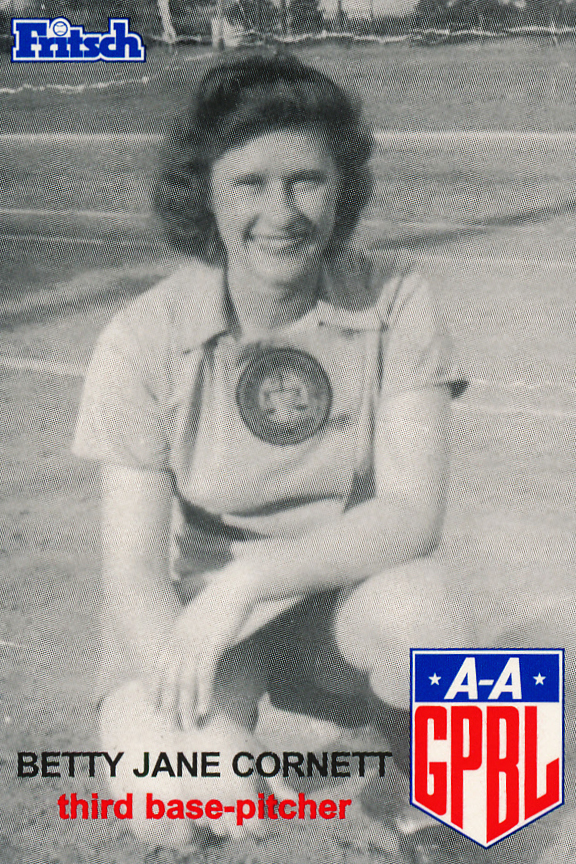 Betty Jane (always insisted on the "Jane" being included), was a "Tom-boy" from early on.  She'd rather play ball, ride bikes, roller skate, or swim during summer months, and in wintertime, it was ice skating, sled riding and indoor basket ball. Everyone in the neighborhoods of Springhill, Spring Garden and Troy Hill knew her as the girl who could REALLY play ball!  She played better than any of our five older brothers!

She loved to dance, sing (we used to harmonize together), and we often doubled dated, being there was less than two years difference in our ages, as sisters.

She received the nickname, "Curly" when she arrived at training camp.  Though she had set her hair in bobby-pins to look nice, the rain undid it all and you know how girls can be in their teens, when they saw her drooping hair, they facetiously called her "Curly" and that name stuck for the rest of her life!

An enlarged copy of Ms. Cornett's baseball card is featured at the Western Pennsylvania Sports Museum, and a second-floor display still holds her mitt, hat and cleats.

"She was so thrilled to see [the museum display]," Ms. Carr said. "We have a photo of Betty Jane in her wheelchair next to her big, enlarged baseball card."

She has kept in touch with so many of her former ball playing friends, all these many years.  I traveled with her to several reunions and was the photographer and video-tographer for her and the other girls from near-by areas, such as "Smokey" Mandella, Norma Dearfield, and Sarah Jane "Salty" Ferguson.  We attended the local preview of "A League of Their Own," an autograph session at Slippery Rock College,  and the opening of "The Senator John Heinz Sports Museum" in November 2004.

Betty Jane Cornett's love of sports turned her into a pioneer.

At 16 -- long before her memorabilia landed in sports museums and halls of fame -- she left her home in Troy Hill to try out for a girls professional baseball team, eventually winding up as one of several hundred women nationwide to participate in the All-American Girls Professional Baseball League, AAGPBL. It became a story she cherished for the rest of her life.

Ms. Cornett, of Reserve, died March 18 after battling a pulmonary disease. She was 73.

The youngest of 11 children, Ms. Cornett grew up a tomboy. She spent her free time in recreation centers swimming, ice skating and playing basketball and softball.

"She could play ball better than any of the boys," her sister Mary Lou Carr said.

Ms. Cornett participated in 1950 and 1951 in the women's baseball league that Philip K. Wrigleyestablished during World War II and that was later celebrated in the 1992 movie, "A League of Their Own.

Betty was one of nine Pennsylvanians to participate in the league.She played briefly for the Rockford Peaches -- the team coached in the movie by Tom Hanks -- attending etiquette classes, traveling throughout the region and playing the sport that she loved.

"The money was pretty good, too," said a league historian who helped establish the league's players' association.

"They were making more than they would have in production jobs: maybe $50 a week, plus room and board."

Teammates nicknamed Ms. Cornett "Curly" because of her hair.

After leaving the Peaches, Ms. Cornett pitched and played third base for the Springfield (Ill.) Sallies, the Battle Creek (Mich.) Belles and the Kalamazoo (Mich.) Lassies. Once, she even played in Yankee Stadium -- a moment she later described as the highlight of her career.Those years of baseball guaranteed her spot in baseball history.

The National Baseball Hall of Fame and Museum features more than 50 artifacts from the league. An enlarged copy of Ms. Cornett's baseball card is featured at the Western Pennsylvania Sports Museum, and a second-floor display still holds her mitt, hat and cleats.

"She was so thrilled to see [the museum display]," her sister said. "We have a photo of Betty Jane in her wheelchair next to her big, enlarged baseball card."

Mass was celebrated at 1 p.m. on May 6 at Most Holy Name of Jesus Church, Troy Hill.