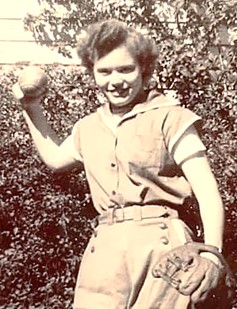 After the death of her parents at a young age, Rita was raised at Saint Vincent Villa Catholic Orphanage.  Rita attended Central Catholic High School and later worked in food and custodial services at FWCS for over 30 years.

In 1946, Rita played in the All-American Girls Professional Baseball League (AAGPBL). She was drafted by the Racine Belles, then traded to the Peoria Redwings.  Her position was catcher, and she was given the nickname “Spud” by her teammates.  In early 1990’s, Rita received recognition in the Baseball Hall of Fame at Cooperstown, NY.  Rita continued her love of baseball by being an avid Chicago Cubs fan, spending many hours watching Cubs baseball during her retirement.
Rita loved her family and enjoyed the family's large gatherings.  Surviving are her three daughters, two sons, 24 grandchildren, 76 ½ great-grandchildren, and 11 great-great-grandchildren.

Rita was preceded in death by her husband, Francis L. Carteaux, son-in-law, Jack Schrader; two sisters, and two brothers.   A private Mass of Christian Burial was held.  Burial was in Catholic Cemetery. Memorial contributions may be made to Masses.