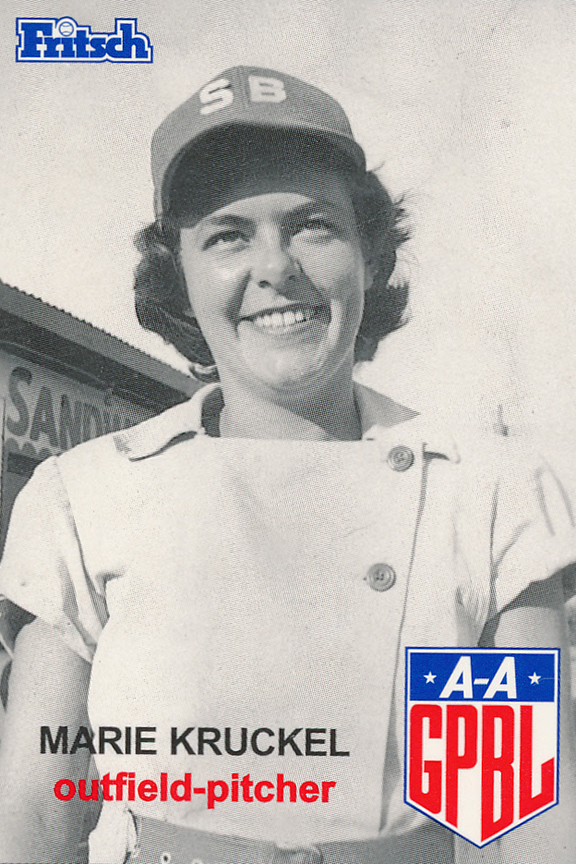 When petite Marie made her debut as a utility player with the Daisies, more than one male's heart beat faster when the attractive infielder came to bat. Far from being just a glamour girl, the New Yorker hit, ran, and fielded with the deftness of a major leaguer.

SOUTH BEND - Marie Ann Kruckel, 88, of South Bend, died at 2:10 p.m. Saturday, July 7, 20`2 in the Healthwin Specialized Care Facility. Ms. Kruckel was born June 18, 1924, in The Bronx, NY, to the late Julia (Krebs) and Julius Kruckel, and had lived in South Bend since the late 1940s. She was also preceded in death by her brother, Eugene Kruckel. She is survived by three nieces, Kathleen Herrmann (Robert) of Stony Brook, NY, and Regina Zadrecki and Dolores Estrada (Frank), both of Bethpage, NY; several great-nieces and nephews; her sister-in-law, Marie Kruckel of South Setauket, NY; and her dear friends, Dottie Oliver and Ruth Davis, both of South Bend. During her grade school days, "Kruck," as she was known, started playing softball in the Bronx and later played organized ball on the weekends while in high school. After graduation, she attended East Stroudsburg State Teachers College in Pennsylvania and played for a team based in Yorktown, NY. In 1945 she wrote a letter to the All American Girls' Baseball League requesting information and received an invitation to the training camp. The league sent her a contract offer after she graduated from college. Marie entered the league in 1946 with the South Bend Blue Sox, playing for them one year before joining the Fort Wayne Daisies in 1947. Because she taught school, Marie was unable to attend spring training and was used exclusively as a fourth outfielder during her first two seasons. In 1948 she returned to the Blue Sox. They tried her as a pitcher because she showed a good command of the curveball and a strong off-speed pitch. She was traded to the Muskegon Lassies midway through the season, staying with them for one more year. Following her baseball career, Marie taught Physical Education and Health and coached softball during her 38 years at Clay High School. Since her retirement, she had been a regular attendee at the annual All-American Girls Professional Baseball League reunion. Marie is part of Women in Baseball, a permanent display at the Baseball Hall of Fame and Museum in Cooperstown, NY, which was unveiled in 1988 to honor the entire All-American Girls Professional Baseball League. Marie was one of the oldest living former players at the time of her death. A Mass of Christian Burial [was] celebrated at 10:00 a.m. Saturday, July 28th, [2012] in Little Flower Catholic Church, 54191 Ironwood Road, with Rev. Jeffery Largent officiating. Cremation [followed] in the Welsheimer Crematory.