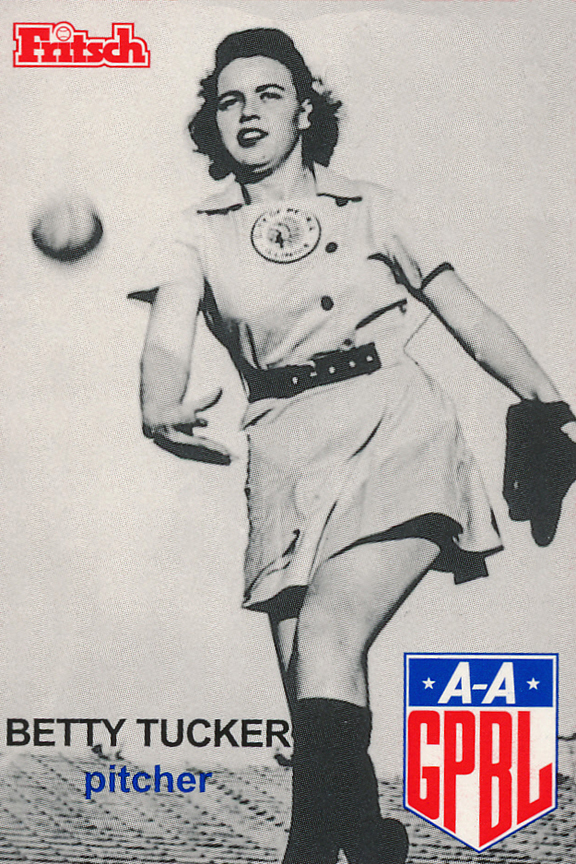 Betty played on the sand lots of Detroit and brought her pitching talents to the AAGPBL. She made a successful change as an underhand pitcher to a sidearm pitcher. She displayed a great amount of speed on the diamond. In the off-season she did office work and enjoyed playing basketball and skating.  She did play in the Chicago League for 5 years from 1950 to 1954.

Eulah Elizabeth "Betty" Tucker was a pitcher who played from 1946 through 1949 in the All-American Girls Professional Baseball League.  Listed at 5' 4", 123 lb., she batted and threw right-handed.  A native of Detroit, Michigan, Tucker received an invitation in 1946 to participate in the AAGPBL spring training held in Pascagoula, Mississippi. After making the league tryout, she was allocated to the Peoria Redwings. A hard-throwing underhand pitcher, Tucker struggled through the many stages of the league, including shifting from underhand (1946) to sidearm (1947) to overhand (1948) pitching. She hurled on expansion teams that did not give her much run support.

After a year in Peoria, Tucker opened 1947 with the Fort Wayne Daisies and then found herself on the move again, this time to the Rockford Peaches and then the Grand Rapids Chicks. The next year she joined the Chicago Colleens, and returned to the Redwings in 1949, her last AAGPBL season. After that, Tucker pitched in 1950 for the Rockola Chicks of the rival National Girls Baseball League, which was based in Chicago and retained underhand pitching through 1953. At the time, many AAGPBL players also joined the NGBL because of better salaries and in some cases for not being on the road as much was also important.

The AAGPBL folded in 1954, but a permanent display at the Baseball Hall of Fame and Museum in Cooperstown, New York was opened November 5, 1988 that honors them.