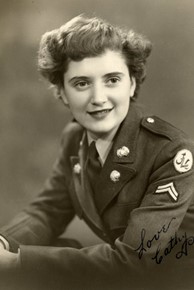 Growing up in the Ingleside District, Alice’s love of sports started at an early age, playing ball as a youth, coaching the “Baby Seals” baseball team (which was a team made up of sons of the major league San Francisco Seals players).  Before joining the Fort Wayne Daisies of the All-American Girls Baseball League in 1946, she worked out with the Seals under the tutelage of coach Lefty O'Doul.  Along with her league mates, she is included in the Baseball Hall of Fame's AAGPBL roster.  In 1951, Alice found herself in Japan as a member of WACS, for a two year term. Once stateside, Alice started a long career with the City of San Francisco Recreation and Parks Department and coached bowlers on the San Francisco Special Olympic Teams.

She is survived by a daughter, her husband, two grandsons, three great granddaughters, a sister in‐ law, two nephews, three nieces, and many grand nieces and nephews.  Alice was preceded in death by two loving brothers and is more than likely sitting at their table, all talking over each other.

In lieu of flowers, the family prefers donations to the Blind Vietnamese Children’s Foundation or the San Francisco Special Olympics.