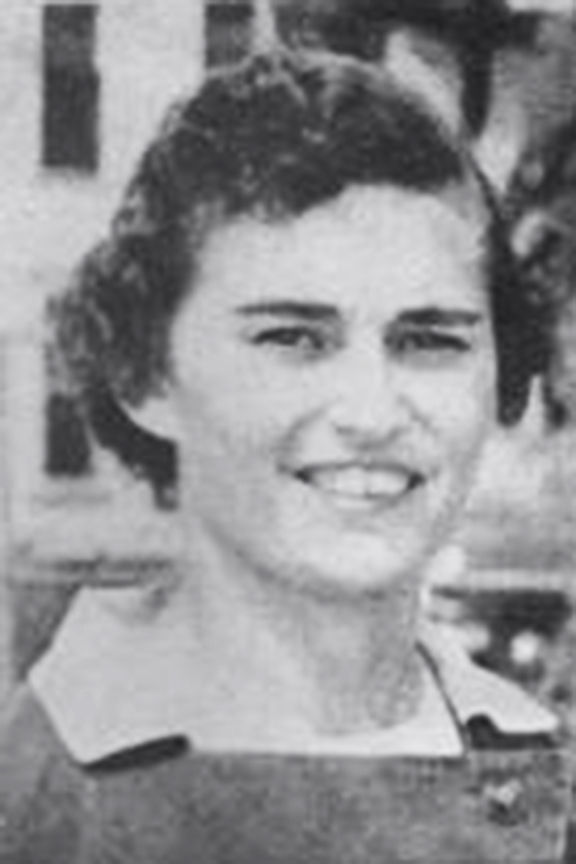 Alice Blaski, third baseman with the Wallingford, Connecticut Owlettes Championship Softball Team in the early 1950s made the grade with the Fort Wayne Daisies in 1953 and 1954.  She was discovered by an AAGPBL scout when the Owlettes played in a championship tournament in Canada. Coach Bill Allington converted her from a third baseman to a right fielder for the Daisies.  She slammed her first home run against the South Bend Blue Sox in June 1953 to help the Daisies extend their win streak to 10 games. Alice and Edith Barney were the only two softball players from Connecticut to join the AAGPBL.

After the league folded, Alice went on to graduate with a business administration degree from Larsen College in Hamden, CT. and from the Elm City Beauty Academy in New Haven, CT. She then became the co-proprietor/operator of the West Harwich, MA. Beauty Shop until her death from breast cancer in 1974.

Blaski, Alice
By Chip Malafronte
"Alice Blaski Was in a Baseball League of Her Own"

Even during the height of its success, the All-American Girls' Professional Baseball League was an unknown entity to the majority of the country. Popular in the Midwest, where the league was centered and based, it wasn't quite the national phenomenon insinuated by the movie "A League of Their Own."

Most of America was unaware of the league, founded in 1943, until the well-known Hollywood film's release in 1992. The AAGPBL was formed when baseball executives, looking to keep the sport in the public eye after World War II called scores of men into service, conjured up the idea for a girls' league. It was small, teams centered almost exclusively in the Great Lakes region.

So it wasn't quite headline news when Wallingford's Alice Blaski, one of only two Connecticut natives to ever play in the 12-year history of the league, was signed to a contract by the Fort Wayne Daisies in 1953.

"At the time, I had no clue (of the league) whatsoever," said North Haven's Carolyn Vanacore, a classmate of Blaski's at Lyman Hall and softball teammate. "Women weren't expected to be interested in sports. Many of us had to sneak out to play softball or whatever because that was the only way we could play. If you were good enough, you might get invited to play with the boys."

Blaski graduated from Lyman Hall in 1948, a time when opportunities for women in athletics were sparse. She was a star basketball player for the Meriden White Caps in 1951, and joined the Wallingford Owlettes, a fast-pich softball unit that competed with top teams in the area like the Raybestos Brakettes. She led her team to regional and state championships and an appearance in the national tournament in Toronto in 1952.

While playing in Canada, Blaski was discovered by a scout for the AAGPBL. The girls' game began as a hybrid of baseball and softball, pitchers throwing the underhanded windmill motion on a field with dimensions of Little League baseball. By Blaski's time it had evolved to true baseball, though players still wore the flashy skirts and attended charm school, just like in the movie.

Blaski signed with Fort Wayne, a team managed by Jimmie Foxx the previous summer but now under the direction of Bill Allington, the most successful manager in league history. Allington moved Blaski from third base, where she played during softball games, to the outfield. She joined Bridgeport's Edith Barney as the lone representatives from Connecticut in the history of the league.

Blaski batted .198 with two home runs, 14 RBIs and 22 stolen bases in 47 games, and decided her baseball days were finished. Classes at New Haven College were in her future, though when Fort Wayne called her midway through the 1954 season in need of an emergency outfielder, she changed her mind.

"I probably would have refused to join the club, but the offer and concession of allowing me to return to school early enough made up my mind," Blaski told the Meriden Record-Journal in 1954.

The year of experience did wonders. A backup to well-known Daisy stars Wilma Briggs, Jean Geissinger and Joanne Weaver a year earlier, Blaski emerged as a starter and key player in Fort Wayne's pennant-winning club. Per her arrangement with the club, Blaski did not compete in the playoffs. She returned home to enroll in classes at New Haven.

"Alice was a good-looking, strong, smart woman who was just a great athlete," Vanacore said. "She had longer legs, and could really run. She had a couple of brothers, and we played together at the Washington Street School; lots of playground stuff, pickup. She was a brave and adventurous woman who took a shot during a time when women just weren't doing those kinds of things. She left this little town of Wallingford and said 'I'm good enough to do this.'"
The Baseball Hall of Fame created an exhibit on the league in 1988.

Alice Blaski died at home in West Harwich, MA (on Cape Cod) from breast cancer on March 31, 1974. She wasn't even 44 years old yet. Before that she was extremely physically active golfing and swimming until she got cancer. She lived with her brother Edwin and his family in Newton while she was receiving cancer treatment in Boston and later returned home on the Cape for her final months. She also ran and owned a beauty shop in West Harwich, MA for many years until her illness. She was born February 15, 1930.

Alice played third base for the championship Wallingford, Connecticut Owlettes  prior to becoming a player in the All American Girls Professional Baseball League.. She came into the AAGPBL with a strong batting average in the softball circuit. Alice graduated from Larsen College with a degree in business administration. She was an all around athlete who played basketball, tennis, golf, and baseball.

Alice was survived by her parents, her brother Edwin, her sister Phyllis, and several nieces and nephews.  Funeral services were held at Eaton and Blute Funeral Home in Harwich, followed by a funeral Mass at Holy Trinity Church.  Burial was at Island Pond Cemetery, Harwich, MA.