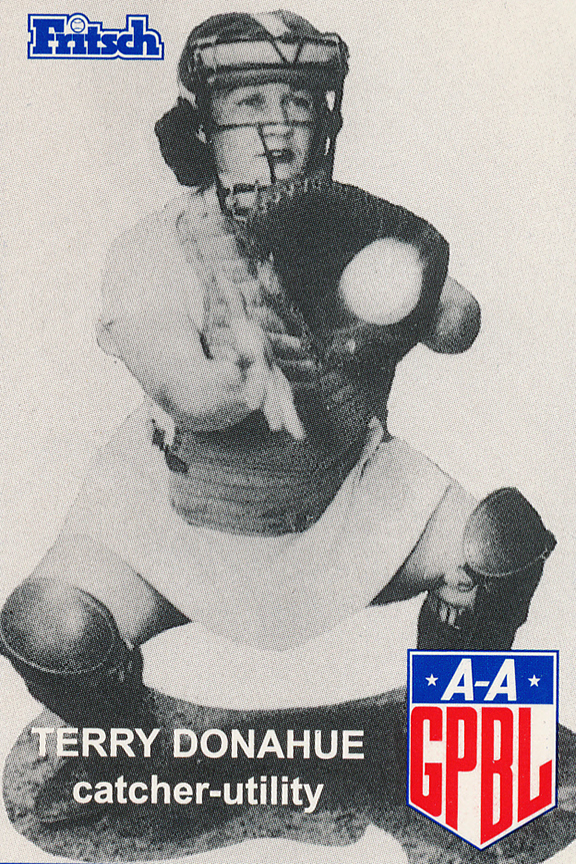 Hear about Terry's experience in her own words through the Grand Valley State Oral history project.

Terry is one of the Canadians who came south to play in the AAGPBL. Terry was a solid receiver for the Redwings and a fan favorite. This Redwing was a hustler and she had a cheerful personality. She also spent some time as a utility infielder and filled in wherever the team needed her. Before coming to the league Terry played on a Canandian National Championship Team. During her playing days she was a store clerk and like most Canandians she enjoys watching ice hockey and playing basketball, bowling, skating, going to movies and photography.

Terry is featured in the 2020 Netflix documentary "A secret Love"

Donahue was born on August 22, 1925 in Melaval, Saskatchewan, Canada.  She got her start in baseball at Melaval High School in Moose Jaw, according to a 1950 profile.  She spent four years with the Moose Jaw Royals team and was voted the outstanding player in the province in 1945.  She started off as an infielder but was asked to catch in an emergency.  After that, she was a catcher and a very good one, too.  Thanks to that success, she was scouted by AAGPBL scout and former MLBer, Bill Walmbsganss, and signed for the 1946 season.  In her four years as a Redwing, Donahue hit for a .127 average with 50 RBIs and 67 runs scored.  She also stole 44 bases, including 28 in 1946.

After her time in the AAGPBL, she starred for the Covington Belles softball team.  Like many of her AAGPBL alumni, she enjoyed the long-overdue recognition that the league earned as a result of the movie "A League of Their Own."

"If it weren't for that movie, nobody would have ever known about us.  It was just something we had done, was in the past, loved it, but was over with," she told the Northwest Herald in 2003.  "But that movie really brought it out."