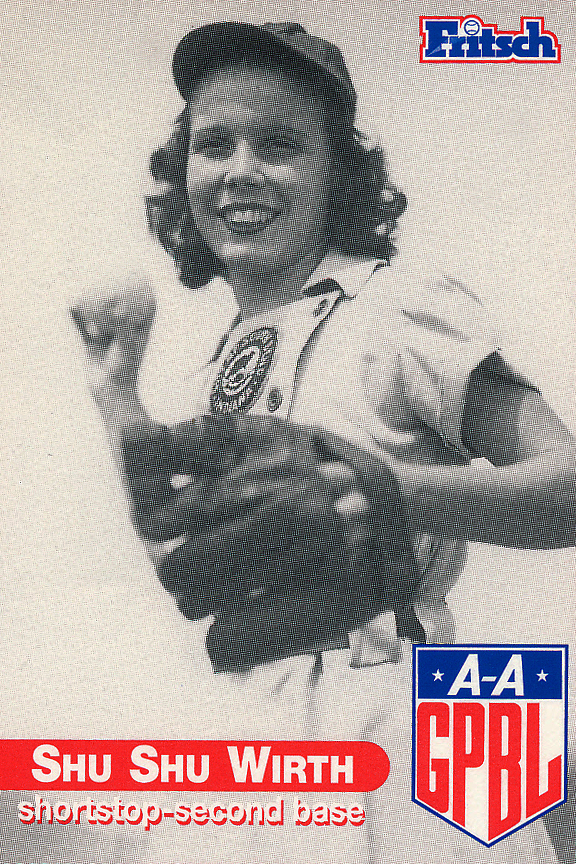 By Shoo Shoo was the only rookie selected for the 1946 All-Star Team.

Senaida "Shoo-Shoo" (Wirth) Mylott was a shortstop who played in the All-American Girls Professional Baseball League. Listed at 5' 0", 114 lb., Wirth batted and threw right-handed. Shoo-Shoo had great speed and was always a threat to steal.  She stole 89 bases in her rookie year with the South Bend Blue Sox in 1946 and was the only rookie selected for the All-Star Team that year.

Shoo Shoo was a fine defensive shortstop with good range on the field and a strong throwing arm. Basically a line drive hitter, Wirth did not have any real power, but she was an accomplished bunter who put the ball in play and was extremely hard to strike out, averaging one strikeout per every 7.55 at bats (160-for-2120) while collecting a solid 1.96 walk-to-strikeout ratio (313-to-160). She  was also respected for her swiftness in stealing bases, because once she reached base, she was almost unstoppable, collecting 352 stolen bases in her seven-year career.

Wirth entered the AAGPBL in 1946 with the South Bend Blue Sox, playing for them through the 1951 season as a replacement for departed shortstop Dottie Schroeder. She joined a talented team, managed by Marty McManus, that included outstanding players such as pitching star Jean Faut, one of the most dominant hurlers of the league, as well as Bonnie Baker, Betsy Jochum, Phyllis Koehn, Elizabeth Mahon, and Inez Voyce, all of whom could be counted on for their bats and solid defense.

Wirth had a promising debut, leading the league hitters with a .386 average at one point in the season. She faded after that, ending with a .249 mark. That season, the Blue Sox finished fifth of six teams with a 49-60 record.

In her sophomore season, Wirth was selected by the AAGPBL managers for the 1946 All-Star Team as a rookie. She hit a .245 average in 107 games, including 65 runs with 91 hits and 22 RBI, while stealing 89 bases. The Blue Sox improved to 70-42 and advanced to the playoffs, but were defeated by the Racine Belles in the first round.

Wirth saw limited action in 1947. Though she missed more than 30 games due to an injury, she was able to hit .227 and score 35 runs in 73 games. For the second consecutive year, South Bend reached the playoffs after going 57-54, but the club lost to the Grand Rapids Chicks in their first round of post-season action.

Wirth increased her average to .241 in 1948, appearing in a career-high 113 games while scoring 60 runs with 26 RBI. Her batting average was remarkable, considering that it was a season dominated by strong pitching. The Blue Sox ended 57-69 and made the playoffs, but again were defeated by the Chicks in the first round.

In 1951 Wirth enjoyed her most productive year in her final season of play when she posted career-numbers with a .274 average and 77 runs scored in 105 games while driving in 54 runs. New manager Karl Winsch guided South Bend to the playoffs with a combined record of 76-36. Finally, Wirth was on a club that advanced to the final series. In round one Faut won two 2–1 decisions against the Fort Wayne Daisies. She later defeated the Chicks twice in the best-of-five series, as South Bend claimed the Championship Title.

In a seven-season career with South Bend, Wirth posted a .248 average with a .345 on-base percentage in 616 games. She is also part of the AAGPBL permanent display at the Baseball Hall of Fame and Museum in Cooperstown, New York, which opened in 1988 and is dedicated to the entire league rather than any individual player.

Zenaida played shortstop for the South Bend Blue Sox of the All-American Girls Professional Baseball League from 1946 through 1951.