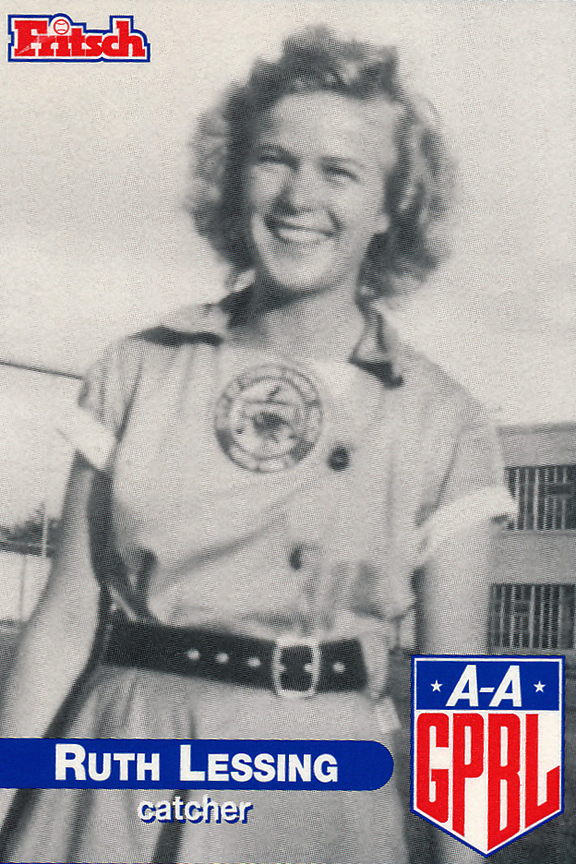 uth Elizabeth Lessing [Tex] was a female catcher who played from 1944 through 1949 in the All-American Girls Professional Baseball League. Listed at 5 ft 5 in (1.65 m), 128 lb., she batted and threw right-handed.

Ruth Lessing has been considered as one of the best defensive catchers in All-American Girls Professional Baseball League history. Respected for her solid skills behind home plate, including a strong and accurate arm, Lessing also was renowned for her fiery and competitive spirit. She played over 100 games during four straight seasons, was selected to the All-Star Team three consecutive years, and set several all-time, single-season records before suffering a career-ending shoulder injury that forced her to retire prematurely. Known for her fiery demeanor, she was once fined $100 for punching an umpire after he made a call she disapproved. In response, a collection taken up by fanatics netted more than $2000. She paid the fine and gave the rest of the money to charity. Lessing said she was not proud of what she had done and wrote the umpire a letter of apology. Both later became close friends.

A native of San Antonio, Texas, Lessing was a standout athlete at Jefferson High School. She was spotted in the early 1940s by a scout from the All-American Girls Professional Baseball League. Then in 1944, at the age of 18, she graduated and immediately joined the Minneapolis Millerettes, an expansion AAGPBL team managed by former big leaguer Bubber Jonnard. In her rookie season Lessing shared catching duties with Pepper Paire.

In 1944, Lessing hit a .177 batting average in 57 games for Minneapolis, scoring 13 runs while driving in 27 more. She posted a single-season, career-high with 22 stolen bases, and ten of her 35 hits were doubles. Playing their home games at Nicollet Park, the Millerettes could not compete with the local Minneapolis Millers. In addition, Minneapolis was far from the other five cities in the league, forcing the Millerettes to spend most of the season on the road. As a result, the team finished last in both halves of the season with a compiled 45–72 record, and they were relocated in 1945 by the Fort Wayne Daisies.
Lessing became a regular with Fort Wayne in 1945, appearing in 110 games and setting an all-time single season record for a catcher with a .982 fielding average. She also hit 123 with 32 runs and 21 RBIs, while the Daisies, with Bill Wambsganss at the helm, had a strong season debut, going 62–47 and finishing four and a half games behind the first-place Rockford Peaches. During the playoffs, Fort Wayne disposed of the Racine Belles in the first round, three games to one, but struggled against Rockford in the final round, losing four-to-one.

In 1946 Lessing joined the Grand Rapids Chicks, playing for them for the rest of her career. As a member of the Chicks, she solidified her position as one of the best backstops around. In her first year with the team, she led all catchers with 141 assists, which is also an all-time record. Besides this, Lessing improved her offensive numbers with a .215 average, 43 runs and 35 RBI, and was selected to the All-Star Team. Managed by Johnny Rawlings, Grand Rapids finished 71–41 and advanced to the playoffs, only to be beaten by Rockford in the first round, three-to-two.

Lessing became one of two hundred players to attend the first AAGPBL spring training outside the United States, which was held in 1947 in Cuba at the Gran Stadium de la Habana. With deliveries changing from underhand to sidearm in that season, the work of Lessing behind the plate was an instrumental part of the success for the pitching staff. She caught splendidly, giving her pitchers confidence and stability by calling the game and instigating defensive plays on the field. Lessing also contributed with her bat, hitting .205 with 24 runs and 42 RBI in 111 games, while earning a second selection to the All-Star Team. The Chicks went 65–47 and made the playoffs for the second consecutive year. In the first round, the team defeated the South Bend Blue Sox in five games, and won the Championship Title behind Mildred Earp, who pitched a 1–0 shutout against the Belles in decisive Game 7.

In 1948, Lessing set another all-time record, appearing in 125 games behind the plate in the regular season. She also posted career numbers in hits (86), runs (43) and RBI (36), while hitting a .206 average and making her third and last All-Star Team, helping the Chicks win the Eastern Section with a 77–47 record. In the postseason, Grand Rapids defeated South Bend in five games but was swept by Fort Wayne in three games during the second round. Unfortunately, just 44 games into the 1949 season, Lessing suffered a career-ending shoulder injury. At the time, she was hitting .233 (28-for-120) with nine runs and nine RBI.

Once her playing days were gone, Lessing returned to San Antonio where she took a job at the Kelly Air Force Base. In 1991, she served as a technical adviser for filmaker Penny Marshall  during the shooting of the film A League of Their Own, which brought many of the real players a rebirth of celebrity. Lessing, like many AAGPBL players, were relatively unknown until  Marshall's film was exhibited for the first time during the summer of 1992.. After that, the AAGPBL Players Association reunions became formal annual events in 1988.

Ruth Lessing died of cancer in her homeland of San Antonio at the age of 75. In 2000, she was awarded a posthumous induction into the Texas Baseball Hall of Fame. She is also part of the AAGPBL permanent display at the Baseball Hall of Fame Museum in Cooperstown, New York, opened in 1988, which is dedicated to the entire league rather than any individual player.

Ruth Elizabeth Lessing, a high school standout and a four-time All-Star on the All-American Girls Professional Baseball League during World War II, died October 26, 2000. She was 75.

The women recruited for the league were all-American or girl- next-door types but with a bonus: They were good athletes. Lessing, a standout athlete at Jefferson high School, with blonde good looks, was spotted in the early 1940’s by a scout while playing for the Alamo Jewelry Co. baseball team at San Pedro Park, said her sister, Mary Carson.

“She was still in high school and too young, so she didn’t join the league until she graduated,” said Carson. Lessing and Alva Jo Moore, both of San Antonio, along with Houston's Marie "Red" Mahoney were the only three Texans recruited for the wartime league.

Lessing was just 18 when she left San Antonio to join the Minneapolis Millerettes in 1944. “That was the first time that I had even been out of Texas,” Lessing said in a 1987 Interview with the San Antonio Express-News. “It was really exciting. To get paid for playing ball was like a dream for me.”

One year she was fined $100 for hitting an umpire after he made a call she didn’t like.  A collection taken up by fans netted more than $2000.  She paid the fine and gave the rest of the money to charity. Lessing said she was not proud of what she had done and wrote the umpire a letter of apology.  The two later became close friends.

The Millerettes became the Grand Rapids Chicks in 1945 and that's where Lessing played her remaining four years in the League. The San Antonian was still with the Chicks when the team won the pennant in 1947. She left the team in 1949 and returned home, where she took a job at Kelly AFB.

In 1991, Lessing was hired as a technical adviser for “A League of Their Own” and appeared in the movie with other former players.  “She had a lot of fun with the movie, and Madonna invited her to her birthday party,” Carson said.

In August 2000, Carson accompanied her sister to a Milwaukee reunion of All-American Girls Professional Baseball League veterans. Carson said Lessing had a lot of fun, signing baseball cards and speaking with fans.