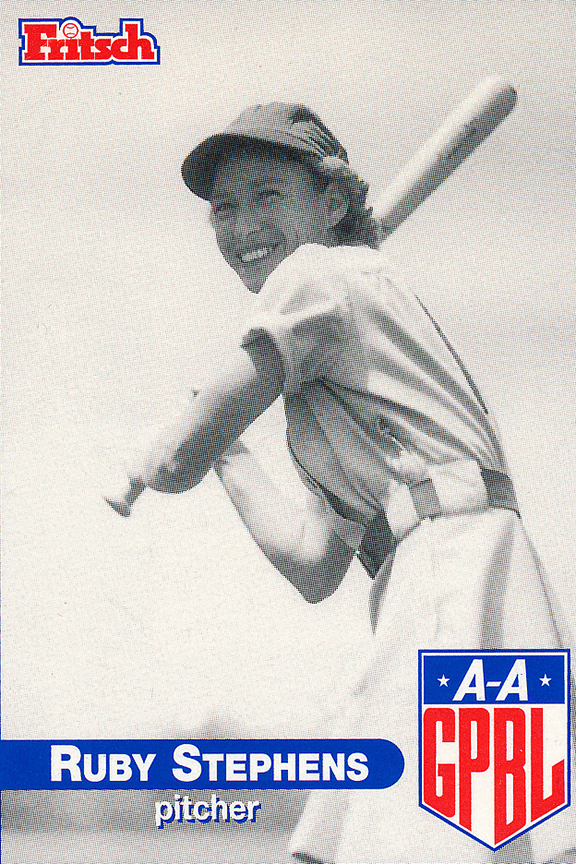 Ruby was a pitcher who played for the champion Racine Belles.

Ruby Lee “Stevie” Stevens, who died in Holiday, Florida, March 21, 1996 at the age of 71, was a pitcher in the All-American Girls Professional Baseball League.  She batted and threw right-handed and played in the league from 1946 through 1951.

Stephens was born and grew up in Clearwater, Florida, where she worked as a ship welder and played softball in her spare time until she was approached by an AAGPBL scout who had heard of her skills as a ball player.  She attended a tryout camp, impressed the rest of the scouts, and received a contract to play in the upcoming season.  She entered the league in 1946 with the Racine Belles, playing for them one year before joining the South Bend Blue Sox (1947), Springfield Sallies (start of 1948) and Kenosha Comets (end of 1948-1951).  Her most productive season came in 1948, when she posted a 20-11 record with a 1.87 earned run average.  She also hurled a no-hitter for Kenosha on July 12, 1950.

In November 1988, the AAGPBL received long overdue recognition when the Baseball Hall of Fame and Museum in Cooperstown, New York dedicated a permanent display to the entire league rather than any individual player.