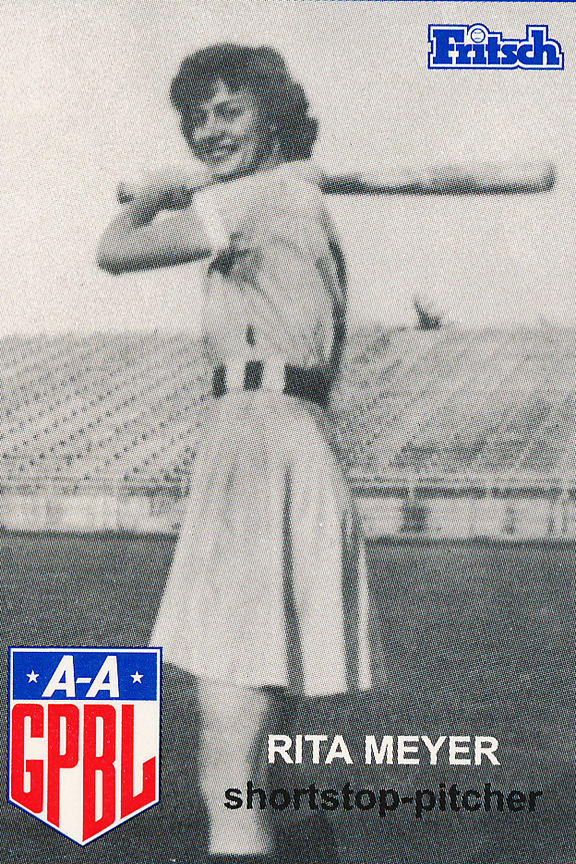 Slats was a slick fielding, hard throwing shortstop who also saw time on the mound. Rita threw a no-hitter against Rockford.  She got her nickname because she reminded people of the St. Louis Cardinal shortstop, Slats Marion. She was also one of the top hitters for the Redwings.

Rita Meyer Moellering, a professional baseball player in the 1940s, died from apparent heart failure Tuesday (June 16, 1992) at her home. She was 65.

Mrs. Moellering, of Florissant, played shortstop from 1946 to 1949 with the Peoria Red Wings of the All-American Girls' Professional Baseball League. She was scouted while playing softball for the old Weik Funeral Home in Florissant. A teammate nicknamed her "Slats" because her style of play at shortstop was similar to the Cardinals great, Marty "Slats" Marion.

She was an extra in the filming of "A League of Their Own, " a soon-to-be released movie about a women's baseball team during World War II. The movie is directed by Penny Marshall and stars Geena Davis, Tom Hanks and Madonna.

In 1988, Mrs. Moellering and other league members were recognized in an exhibit at the Baseball Hall of Fame in Cooperstown, N.Y.

Mrs. Moellering was born in St. Louis, MO. (February 12, 1927) She was active with her brother in the Marianist Art Gallery at Vianney High School from 1976 until she retired last year.

In the past month, she was a supporter of "run jane run, " a fund-raising multievent athletic competition of the Women's Self Help Center. A funeral Mass was celebrated at 10 a.m. June 19, 1992 at Sacred Heart Catholic Church, 751 North Jefferson Street. Burial was in Sacred Heart Cemetery.

Memorial contributions may be made the Women's Self Help Center, 2838 Olive Street, St. Louis Mo. 63103.