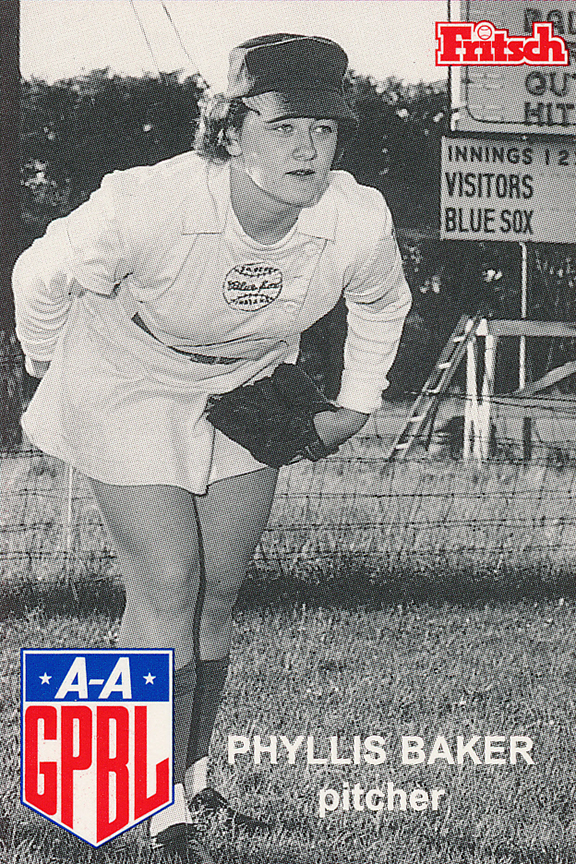 Phyllis was an accomplished athlete as a youngster.  She especially enjoyed playing sandlot baseball, usually in the family yard next to the house at the corner.  According to Phyllis, there was never a parental complaint about the occasional broken window or the every-present noises.

Her brother Bud was with a friend one evening in 1952, watching the Battle Creek Belles All- American Girls Professional Baseball Team play in Battle Creek while Sid announced the game. Bud went right home to sister Phyllis and told her she was good enough to play pro ball and that she needed to go over for a tryout.

Phyllis did just that, and at the age of 15 became one of the youngest players ever in the All-American Girls Professional Baseball League, She became a pitcher for the Battle Creek Belles during the 1952 season. That first year, she was throwing a lot of batting practice. In 1953, the franchise moved to Muskegon where Phyllis had one of her most memorable victories. She pitched into the 11th inning, and then won the game with a hit. Her parents were in the stands, which made it a very special moment. She also threw a one hitter against Fort Wayne that season.  At the end of the 1953 season, the team folded. Phyllis recalled "They put our names in a hat and split us up.” She then went to play with the South Bend Blue Sox in the 1954 season. At the end of the season, she was moved to the Fort Wayne Daisies for that year's playoffs.   She recalled "getting a couple of relief jobs" during the playoffs,

The league folded after the 1954 season. Phyllis had maintained her studies at Marshall High School and graduated from there with the Class of 1955.   The inscription in her yearbook included her nickname "'Toots'" and also "Take Me Out To 'the Ball Game!”  Phyllis also played guard on the Kalamazoo Lassies basketball teams for four years.

Phyllis worked for a short time in Battle Creek.  In the late fall of 1955, she went to work at an Insurance Company Regional Office in Marshall and retired from there in 1978.

On October 7, 1961, she was married to another baseball player, Clifton R. "Cliff" Wise. The couple lived most of their lives together on their farm.

Phyllis continued to play fast pitch softball with a Kalamazoo team and various Marshall area teams for many years, usually pitching, but sometimes playing first or third base.  At one point, husband Cliff was her coach, and several of her nieces were her teammates.  Phyllis helped coach Marshall High School Girl Redskin Softball teams for 13 years with husband Cliff.   She was Cliff's mentor and most capable assistant, giving knowledgeable advice to the girls.

Phyllis frequently was hostess to end of season team gatherings at the Wise farm in Marengo Township. She also coached women's teams in Rice Creek league play. Phyllis liked to fish in her spare time with husband Cliff and family. Trout fishing was a favorite. The couple built a cabin near Lewiston where they enjoyed precious time together with each other, family, and friends. Phyllis also was a devoted deer hunter, especially enjoying hunting with nephew Briars and brother Larry, while husband Cliff coached their efforts!  Phyllis was famous for her baking, especially cookies.

In 1988, Phyllis was recognized by the Baseball Hall Of Fame in Cooperstown, New York as a member of the All-American Girls Professional Baseball League.  The women players were remembered in a movie, "A League Of Their Own,” which premiered in July 1992.

A native of Marshall, Michigan, Phyllis Baker began playing sandlot ball with the neighborhood kids at a very early age, usually in the family yard next to the house at the corner. There was never a parental complaint about the occasional broken window or the ever-present noises, as she said in an interview. She grew up rooting for the Detroit Tigers and her favorite player was Al Kaline.

One evening in 1952, her brother Bud watched the Battle Creek Belles All-American Girls Professional Baseball team play in Battle Creek while his friend Sid announced the game. Bud talked to the public address announcer and went right home to Phyllis and told her she was good enough to play professional baseball, while adding that she needed to go over for a tryout. The 15-year-old girl went to a Belles tryout and was signed to a contract, spending the year pitching batting practice while attending Marshall High School. In 1953, the team was moved to Muskegon, Michigan where they became the Muskegon Belles.

Baker posted a 7–12 record and a 3.21 earned run average in 28 pitching appearances for Muskegon, which finished 39–70 and out of play-off contention. During the midseason, she hurled a one-hit shutout  against the strong Fort Wayne Daisies, managed by Bill Allington,  and facing a lineup  boosted by sluggers such as Wilma Briggs, Betty Foss, Jean Geissinger, Katie Horstman, and Joanne Weaver. Daisies manager Allington was impressed with the performance of Baker, and considered her the best rookie pitching prospect for that season. In another game, Baker pitched into the eleventh inning and then hit an RBI-single in the bottom of the inning to win the game. At the end of the season, the Belles folded, and Baker was sent to the South Bend Blue Sox.

South Bend finished in second place (48–44) in 1954, during what turned out to be the league's final season. The Blue Sox lost in the first round of the playoffs to the eventual champion Kalamazoo Lassies, two games to one. Baker had a 5–11 mark with a 4.81 ERA during the regular season, and was sent to Fort Wayne for the championship playoffs. She pitched two shutout-innings of relief in Game 3 and was credited with the win in an 8–7 victory over the Kalamazoo Lassies. Overall, she made three relief appearances and went 1–0 with a 0.82 ERA in 11 innings of work.

After the league folded, Baker returned to high school and graduated in 1955. She then worked for State Farm Insurance Company in Marshall and retired from there in 1978.

Baker also played guard on the Kalamazoo Lassies basketball teams for four years; coached women's teams in Rice Creek league play; and worked for a short time in Battle Creek. A cancer survivor, she continued to play fast pitch softball with a Kalamazoo team and various Marshall area teams until she was 48, usually pitching, but sometimes playing at first base or third base.

In 1961, she married Clifton Wise, a softball coach and former baseball player, and helped him coach Marshall High School Girl Redskin Softball teams for 13 years. They retired in 1993 and moved to Battle Creek, Michigan, where she died at the age of 69.