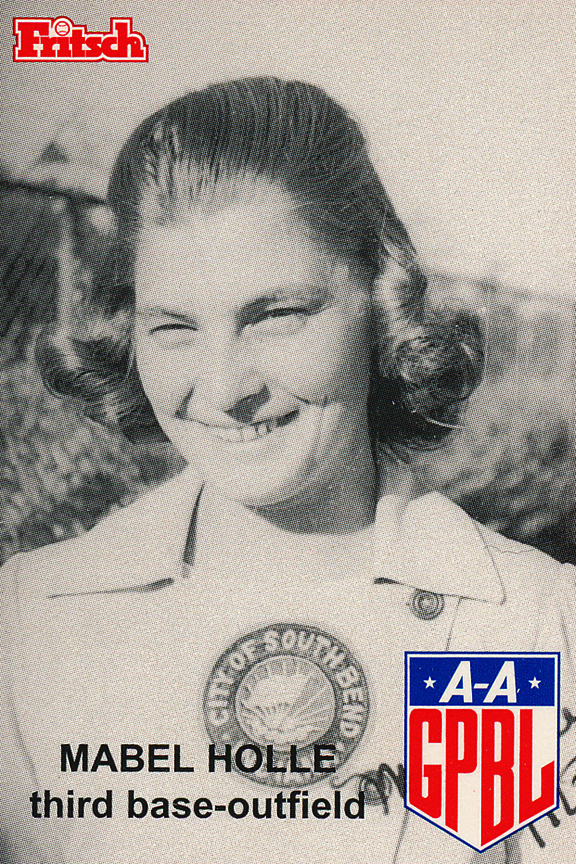 Mabel played for South Bend in 1943. Playing with and against some of the great stars of league.   And training at Wrigley Field were thrills for her.

Her greatest thrill came when she had the winning hit at a game in South Bend, with her mom and little sister in the stands.

Mabel B. Holle, a member of the All American Girls Professional Baseball League and longtime woman’s sports advocate, died Sunday, Dec. 11, in Lake Forest, IL after a long illness.

Born in Jacksonville, IL on March 21, 1920, she loved to play sports as a child and spent most of her time outdoors.  In 1943, she became a member of the original South Bend Blue Sox of the All American Girls Professional Baseball League (AAGPBL).  She played third base and outfield and the highlight of her career was when her mother and two younger sisters attended a game when she had the game winning hit.  She had a very strong arm and was known for throwing out runners at home plate from the outfield.  She also played with the Kenosha Comets for a short period of time.  On Nov. 5, 1988, Mabel was enshrined in the Baseball Hall of Fame at Cooperstown, N.Y., as a member of the All American Girls League.

After professional baseball, Mabel became a physical education teacher.  She was coach and athletic administrator in the Waukegan schools for most of her professional career.  Mabel was the first person to chair the IHSA Girls Track and Field Advisory Committee.  She served as a member of the advisory Committee during the early years of the girls’ state series, and then on the Games Committee of the girls’ state meet.  In 2001, she became the Illinois State girls track honorary referee.

Mabel graduated from MacMurray College in Jacksonville, IL. in 1942.  She was inducted in the MacMurray Sports Hall of Fame in 1993, and has an annual award in her honor that goes to the female athlete who exemplifies leadership in the classroom and the playing field.

She was preceded in death by her parents, Kathryn (Ollie) and Fredierick Holle; sister, Emma; and brother, Frederick.

In lieu of flowers, please consider donations to the All American Girls Professional Baseball League at http://www.aagpbl.org/index.cfm/pages/un-categorized/34/donations or the Midwest Palliative & Hospice Care Center at http://www.carecenter.org/make-a-gift/honor-a-loved-one.

A private memorial will be scheduled at a later date.