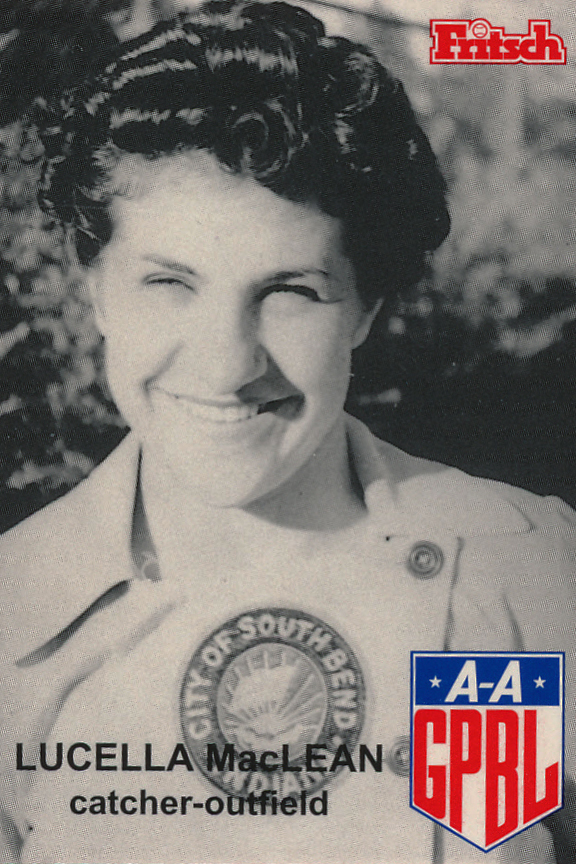 I left the AAGPBL after the 1944 season and played in the National Girls Baseball League in Chicago. The NGBL teams I played for included the following::

Lu was interested in many sporting activities.  She began skating at the age of four, and was soon involved in hockey and softball.  Throughout school she won awards for her sporting excellence.

In 1936 Lu began playing softball with the Lloydminster nationals' senior team.  This team won the Ester Trophy (a Saskatchewan competition) in Saskatoon in 1937 through 1940.  In 1940 LucelIa began catching softball for the Saskatoon Pats. The team won the Provincial Hunking Trophy in 1941.

At this time Phillip K. Wrigley was forming a Professional League in the U.S.A.  The "All-American Girls Professional Softball League" consisted of four teams in 1943, and increased to six in 1944.  Lucella was called to tryout and in 1943 was assigned to the "South Bend (Indiana) Blue Sox", and played for that team for two years.  In 1945 Lucella declined to continue to play in that league and returned to Canada to catch for the Edmonton "Army and Navy Pats".  In the fall of 1946, Lu returned to professional softball and played in the Chicago League for seven years before hanging up her cleats and mitt.  Lu returned to Lloydminster in 1959.

In 1988 the National Baseball Hall of Fame and Museum in Cooperstown, New York honoured the A.A.G.F.B.L. with a large permanent display of the league's history and listed the names of each player.  The players on this occasion held a reunion, which brought back many fond memories.

On April 6, 1991 Lucella was inducted into the Saskatchewan Baseball Hall of Fame along with several other players from Saskatchewan who played in the A.A.G.P.B.L.

Lu was interviewed with regard to the movie "A League of Their Own".  She was disappointed with the lack of accuracy, particularly the use of foul language and ungentlemanly and unladylike behavior.  It was not the way she remembered it but as she sighed, "I guess they have to do that in the movies, but we were true professionals."

Lucella and husband Merv were involved in their church and community organizations.