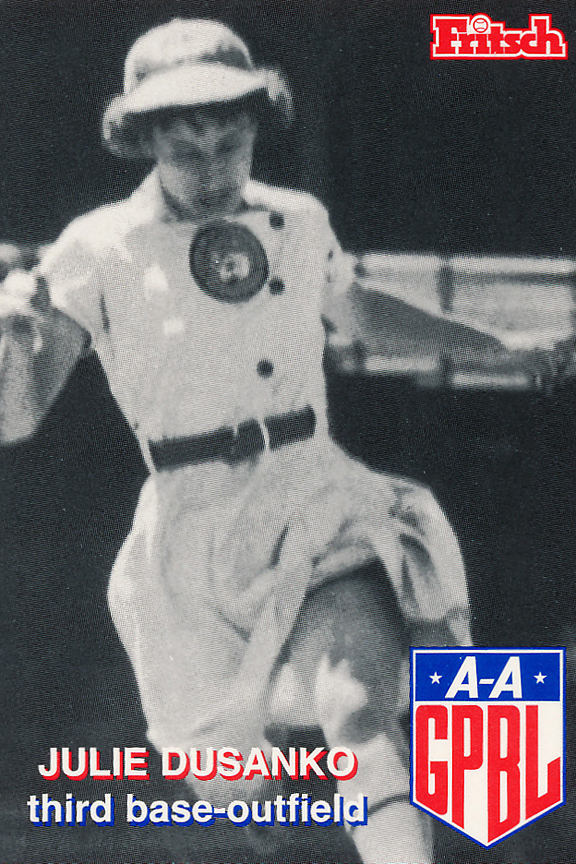 Julie Dusanko [Sabo]   was a Canadian infielder  who played in the All-American Girls Professional Baseball League.

Listed at 5' 5", 122 lb., Dusanko batted and threw right-handed. She was born as Julianna Rita Sabo in Regina, Saskatchewan. Dusanko was one of 57 girls from Canada who played in the All-American Girls Professional Baseball League during its 12-year history.

Dusanko joined the league during the 1944 season, dividing her playing time with the Minneapols Millerettes and the Racine Belles.

After that, she remained in the United States to play in the National Girls Baseball League of Chicago with the Parichy Bloomer Girls. She then returned to Canada to play fastpitch softball and was a member of two championship teams.

She moved to Arizona in 1963 with her husband Eugene Dusanko, an air force man she had married two months before joining the league in 1944. The couple had a son, named Richard, who died in 1991 at the age of 28. Her husband died the same year at 67 years old.

In 1988, Dusanko received further recognition when she became a part of Women in Baseball, a permanent display based at the Baseball Hall of Fame and Museum in Cooperstown, New York, which was unveiled to honor the entire All-American Girls Professional Baseball League.  She also gained honorary induction into the Canadian Baseball Hall of Fame in 1998. Dusanko died August 22, 2003 at her home in Scottsdale, Arizona at the age of 81.