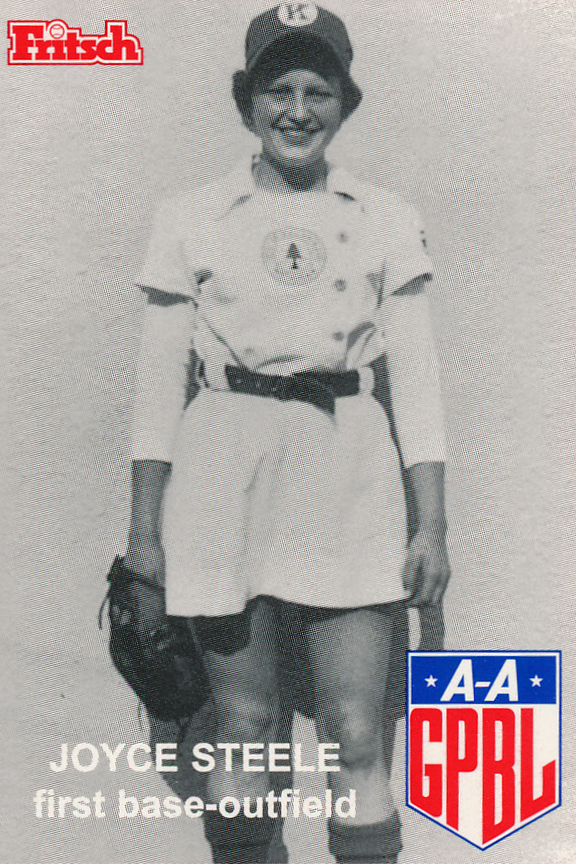 Joyce signed a contract with Kalamazoo in 1953 and saw limited action. She did not return in 1954 for the final season. In stead, she switched to softball and played until 1988. She credits playing sports with teaching her how to be competitive along with the value of teamwork.

Joyce Maureen Steele, 82, of Lovelton, PA., passed away on April 21, 2019 at Towanda Skilled Nursing.
Joyce was born on Dec. 25, 1935 in Wyalusing Borough, Bradford County. She was the daughter of the late Cecil C. Steele and Genevieve Knolles Steele. Joyce worked at Fairway Spring in Elmira-Horseheads for over 20 years.

In 1972, Joyce and sister Joni made a tavern from the old Lovelton one-room schoolhouse. They called it Steele’s Tavern. From 1985-1996 Joyce and Millie Farr owned the Lovelton Hotel, Joyce owned Colley Pub in 2001.

Joyce was a member of the Tues. Club which was formed in 2003, and met at the Mildred Legion for years. Joyce was a member of the Women’s Dart League in Bradford-Sullivan County for 35 years, and was the treasurer for many of those years. She also ran many dart tournaments for the benefit of others. Joyce and her “Pop” Cecil started a ring toss league in 1972, which was still going strong at her passing. Joyce was a member of Women of the Moose in Endicott-Johnson City for over 40 years, Dushore Legion Auxiliary, Post 187 AMVETS Association, Women’s Amateur Softball League, Joyce played softball for many years with Sayre, Pa., Elmira, N.Y., 10 years with Binghamton, N.Y., Clayton, Del., to name a few, and the All American Girls Baseball League. She was memorialized in the Baseball Hall of Fame in Cooperstown., N.Y., in 1988 with all of her league mates. She played for the Kalamazoo Lassies, Kalamazoo, Mich., in 1953. The AAGBL has a room of their own in Cooperstown; Joyce Steele’s name is on the roster with her hometown of Wyalusing, PA. Joyce was in the movie “A League of Their Own.”

Joyce loved her flowers and mowing her lawn with her cat Susi by her side. She fed many stray cats and anything else that was hungry. She loved animals and feeding her birds.  She had a special place in her heart for animals, especially the little critters without a home. She loved jigsaw puzzles and always had one going. Joyce and Joni worked on them year round.

Joyce belonged to St. John’s Lutheran Church in Wilmot, PA. Her pastor, Phyllis Pelletier, reinstated her in October of 2015. Her good friend Nannette Good stood up with Joyce during this ritual. Thank you both for all you did, I miss all of you at church.

She is survived by the greatest family ever. Her sisters, her partner, her brother,  several nieces and nephews, her cousin and many special friends.

Joyce also left behind her second family at Towanda Skilled Nursing. How great all the nurses and care givers treated her!

A memorial service and celebration of life were held for Joyce and burial took place in the Colley, PA., Cemetery.