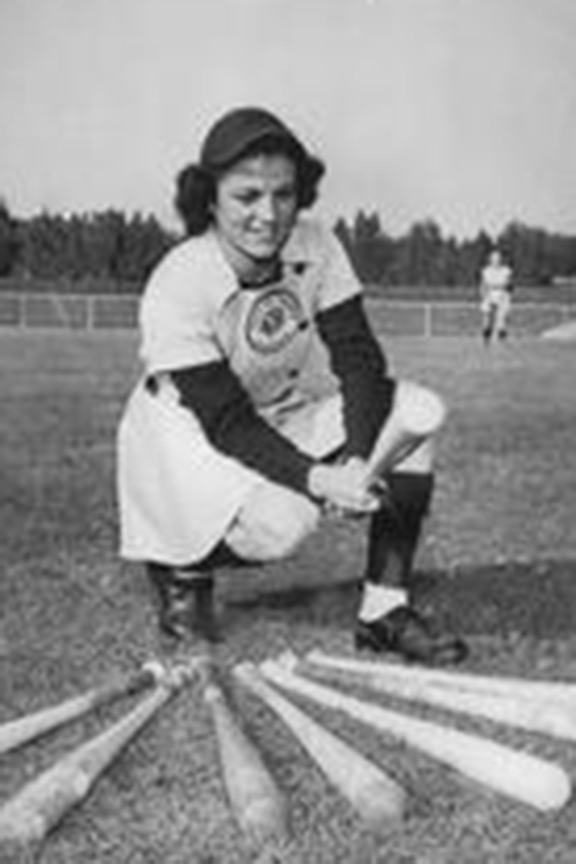 Hear about Jerre's experience in her own words through the Grand Valley State Oral history project.

Speedy little Jerre had played baseball since she was 14 years old, and although she didn't have many opportunities to perform in the All-American League, Redwings fans knew she could really move around the diamond. Jerre was the hard-luck girl of the Redwings roster. First she was out with an injured shoulder. Then, on a slide, she incurred a multiple injury to a shoulder and leg. Later, she broke a finger. So there's good reason why the dark-haired outfileder didn't spent much time in the starting line-up. She wore Uniform No.16

Jerre DeNoble, 89, passed away Tuesday, January 18, 2011.  A long time resident of San Lorenzo, California, She went to Peoria, Illinois in 1947 to become a member of the Peoria Redwings of the All-American Girls Professional Baseball League.  Jerre only spent one year with the team as an outfielder.

In 1947, Jerre relished spring training in Cuba, and  contributed to the Redwings’ first league win by crossing the plate with the 12th inning run that beat the Racine Belles.  The Redwings also won the second game that night. During her year with the Redwings, Jerre was out with an injured shoulder, and then on a slide, incurred multiple injuries to her shoulder and leg.  Later, she broke a finger, so her time in the starting line-up was curtailed.

Jerre lost contact with her friends from the AAGPBL, but thanks to her niece, Kalisa, she re-established contact in 2010 in time to attend her first and only AAGPBL Players’ Reunion in Detroit during the first week of August.  There were many tears of joy as she and her former teammates re-connected.

Jerre had a forty year career with the Owens Illinois Glass Company.  After retirement in March 1981, she worked as a bartender and focused on her family and friends.  She also served in the National Guard and drove delivery trucks & cars delivering film.

Jerre became a devoted friend to many in need--cooking meals, cleaning, driving, and attending to any other needs they had.  To all who ever met Jerre, it only took one time to be drawn in by her infectious smile and laughter.

Jerre had many interest. In addition to baseball, she played golf, basketball, and even owned and rode a race horse at one time.  She was a devoted catholic and a member at St. John Catholic Church in San Lorenzo.

She was preceded in death by her parents, Frank & Emma DeNoble, brother, Verne, and sisters, Dolly, Debbie, and Teeny.