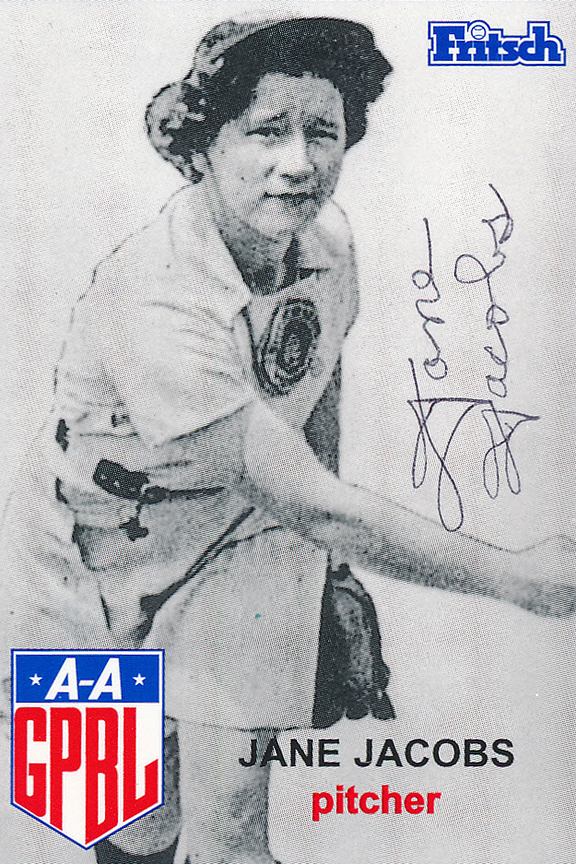 Hear about Jane's experience in her own words through the Grand Valley State Oral history project.

Jake joined the Racine Belles in 1944. She was a pitcher before she join the league and signed as a pitcher for the Belles. She had an ambition to become a reporter. Jane's other sport interests were bowling, horseback riding and basketball.

A local woman who participated in a women's baseball league during the World War II era has died.

Jane (Jacobs) Badini, who was a member of the All American Girls Professional Baseball League (AAGPBL), died Sept. 13, 2015.

While her sister Mary was playing with dolls, Jane Jacobs had a ball in her hand at age 3, according to her obituary. She was born in Cuyahoga Falls in 1924. Mrs. Badini grew up playing softball with her brothers Charles and Johnny, and then later on with organized teams. She started playing baseball at the age of 11. In 1943, she was spotted by a League's scout at the age of 18. Mrs. Badini entered the League in 1944 with The Racine Bells, playing for them for two years. In 1946, she was loaned to The Peoria Redwings. She returned to Racine in 1947. In her four-year career, she was managed by Racine's Leo Murphy, and Peoria's Bill Rodgers. She returned to Ohio where she operated her own dry cleaning business for 40 years. She is also part of the "Women in Baseball" wing in Cooperstown, N.Y. In 2009, she traveled to Cooperstown to visit the A. Bartlett Giamatti Research Center to read her baseball career file for the first time. Mrs. Badini is survived by her sister Mary Patricia "M.P." McCrossin and was preceded in death by her husband Mario Badini, mother,Virginia Augusta Jacobs; her father Charles Milton Jacobs; brothers Johnny and Charles Jacobs, along with her twin brother James Joseph Jacobs, who died in 1945 during the War. Mrs. Badini is survived by many friends and family, including her "loaned" daughters (Khloe Shih and Amanda McCrossin).

"Thank you Aunt Janie for many years of smiles, happiness and love," said her niece Jeannie McCrossin. "You've always been a phenomenal role model to all in your life, and you've touched the lives of many. I know your mother, father, brothers, husband, your best friend 'Shorty,' and all of your friends and relatives who went before you are with you now in Heaven. A special thank you to Dr. Shaw and Dr. Jenisen, Hospice and The Anthony Funeral Home for being so helpful and kind in our time of sorrow. Also, thank you William, for your helping hand in the care of Aunt Jane. It was an honor to take care of you, Aunt Janie. God Bless you, and I know you're pitching strikeouts once again up on the big field."

Calling hours took place at the Anthony Funeral Home McGowan-Reid and Santos Chapel. A Mass of Christian Burial was celebrated at St. Joseph Catholic Church in Cuyahoga Falls. Interment was at Oakwood Cemetery.