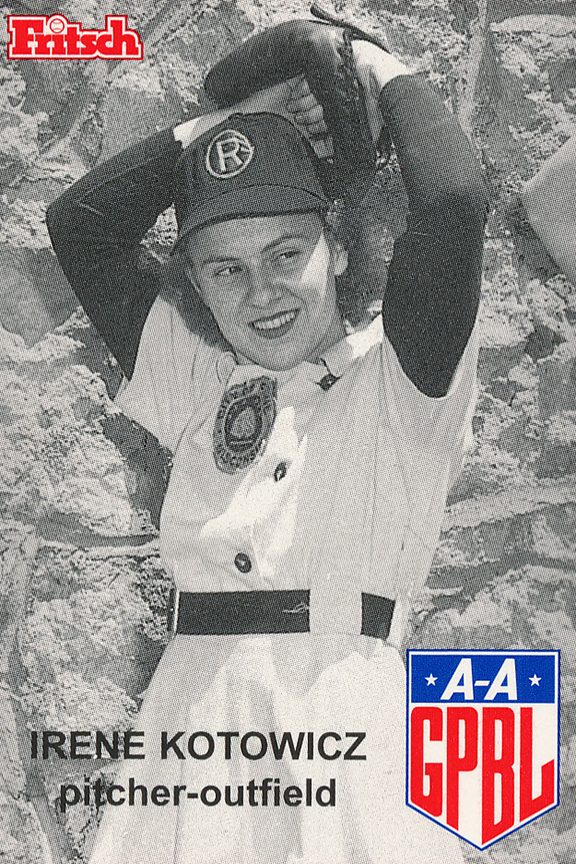 In 1947, Ike was a reformed outfielder, turned pitcher. She worked hard in the off-season on her pitching and moved into the starting rotation. Plagued by some wildness at first, she continued to master the overhand delivery and developed a fine assortment of stuff which made her all but invincible on her good days. She won some big games for the Belles in 1948.  She also played in Chicago for the Rockolas. Her off-season activities included basketball and bowling.

Irene K. Kotowicz, 82, who played for the Rockford Peaches, the All-American Girls Professional Baseball team made famous by the 1992 film "A League of Their Own," died of heart failure Thursday, Jan. 24, 2002 in Alexian Brothers Medical Center in Elk Grove Village.

Born and raised in Chicago, Ms. Kotowicz, in the 1930s joined a small baseball league that played exhibition games, said longtime friend Marian Taylor. "I was from Ohio, so I never heard of girls playing baseball," Taylor said. "I thought this would just be a novelty, but here they were playing a real game and sliding into bases, which surprised me." Taylor introduced herself to Ms. Kotowicz after a game, and the two became fast friends.

In 1945, Ms. Kotowicz signed with the All-American Girls Professional Baseball League founded two years earlier by chewing gum magnate William Wrigley as a way to maintain interest in baseball during World War II. For part of her five years in the league, she was a pitcher and outfielder for the Rockford Peaches. Ms. Kotowicz enjoyed the independence and celebrity of being a professional athlete, but didn't think of the league as historical and was puzzled by the hype surrounding the movie. "She and the other players were always mobbed for autographs, and she got a big kick out of it," Taylor said.