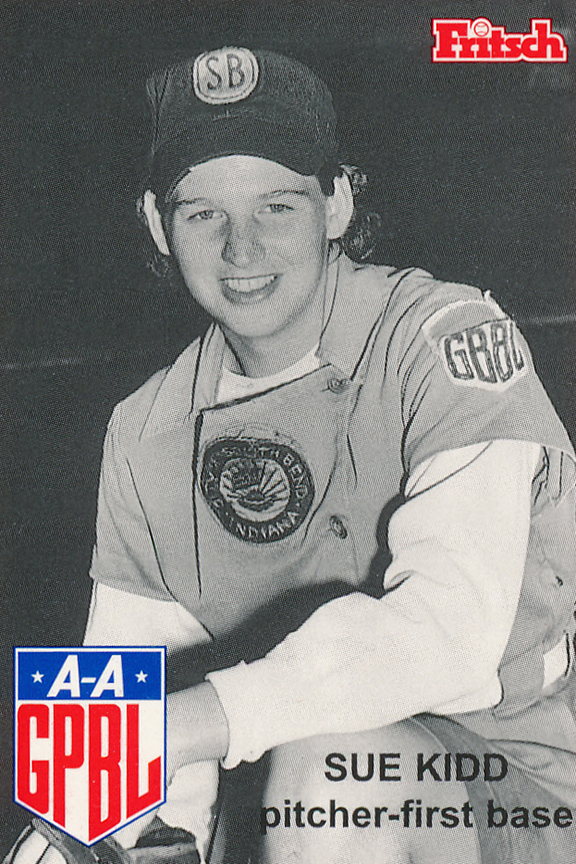 Hear about Sue's experience in her own words through the Grand Valley State Oral history project.

Glenna Sue Kidd was born in 1933, the year President Franklin Roosevelt took office during the bottom of the Great Depression, and she grew up near Choctaw, Arkansas. Her father, Marvin Kidd, loved baseball and managed a town team in addition to running a store which contained the local Post Office, which he also operated. The six Kidd children took care of chores at home and duties at the store, but mainly the boys played baseball. Marvin’s three sons attended a baseball school in Greenbrier and played on the Kidd team, but Sue, who began playing with a rubber ball as a toddler, showed enough skill to play on her father’s team by the time she was a teenager. Girls’ games weren’t for her. The tall, shy teen with the dark blond hair and gray-green eyes loved team sports, but in high school she excelled in baseball and basketball.

Sue’s baseball ability changed her life forever when two AAGPBL touring teams, the Colleens and the Sallies, arrived in Little Rock in June of 1949 to play a pair of exhibition games. Doc Williams, the owner of Greenbrier’s baseball school, got word to Marvin Kidd that his daughter should go to Little Rock for a tryout. The Kidd family arrived, and Sue, then fifteen, tried out before the game. She made it, the family saw the game, and they drove home so Choctaw’s favorite daughter could join the tour the next day. Big and strong but socially awkward, the 5’8” right-hander with the hard fastball and the assortment of breaking balls learned proper behavior around teammates as well as how to get her hair done and buy clothes, making lifelong friends like Wimp Baumgartner and Fran Janssen. Not only did Sue pitch a no-hitter and prove herself worthy of the league, but at home on September 12, the teenager pitched her father’s team to a victory over all the all-male Heber Springs’ All-Stars, a feat that became part of local legend.

Sue graduated to the regular All-American League in the spring of 1950, but she bounced from the Muskegon Lassies to the Peoria Redwings and, on August 1, to the South Bend Blue Sox, where she spent most the rest of her pro career. In 1951, the Blue Sox got a new manager, Karl Winsch, a onetime minor league right-hander and husband of the team’s ace pitcher, Jean Faut. South Bend had a surplus of talent, so Kidd was loaned briefly to the Battle Creek Belles. Still, she came into her own as a hurler, helping South Bend win Shaughnessy Playoff Championships in 1951 and 1952, the second when twelve Blue Sox players outlasted the Rockford Peaches.

Like many young girls who came to the league during the declining years after 1949, Kidd was anxious to play pro baseball. She cared little about the money and most about playing the game. A team player, she grew out of her shyness and helped South Bend win, notably in her last three seasons. Sue’s greatest highlight came when she pitched and won both ends of a double-header against the Grand Rapids Chicks on July 4, 1953, before a crowd of more than 5,000 at South Bend’s Playland Park. A few days later, the team and fans honored her with a memorable “Sue Kidd Night,” when she tried to ride a mule onto the infield! Overall, she posted double digits in wins from 1951 through 1953, and her 9-5 record in 1954 showed the country girl was a stellar performer. She played basketball in the 1950s with South Bend’s Usherettes, earned a Bachelor’s and Master’s from the University of Central Arkansas in the 1960s, and enjoyed a long career of teaching PE and coaching, but the baseball dream ended too soon for younger stars like Kidd.

Glenna Sue Kidd, 83, of Choctaw, Arkansas was born September 2, 1933 to the late Marvin and Julia (Duncan) Kidd and passed from this life on May 4, 2017. She was a graduate of Clinton High School and received a masters degree at the University of Central Arkansas. Sue taught school for 25 years in Logansport, Indiana, was partner in a dog grooming business and tax preparation business. She played six years in the All American Girls Professional Baseball League and is listed in the Baseball Hall of Fame in Cooperstown, New York. Sue played basketball for eight years with the South Bend Rockettes, which was two-time national champions. She was named All American Basketball player twice in the 1950's. Sue was a faithful member of the Church of Christ.

Sue is preceded in death by her parents, two sisters, and two brothers.

Left to cherish her memory are a brother and sister-in-law, a very special sister, two sisters-in-law, and a host of nieces, nephews and friends.