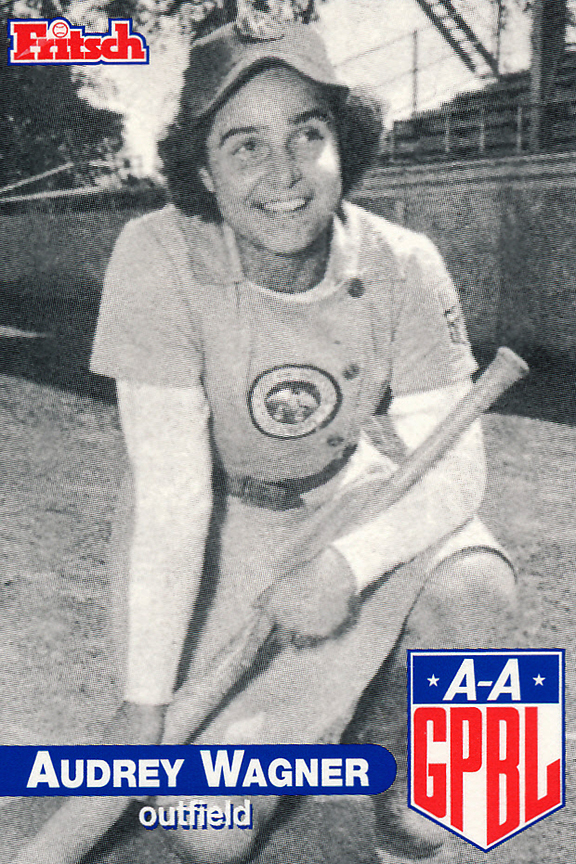 Outfielder Audrey Wagner was one of the top power-hitters in the AAGPBL, and her 55 triples rank second all-time to Eleanor Callow.  While her career started slowly, one must be aware that she joined the league as one of the first 60 players at the age of 15 while still a sophomore in high school! With the 1943 Kenosha Coments, Wagner hit .230 and tied for second in the league in triples (10) and tied for third in homers (4). A year later she fell to .189/~.246/.230 and for the only time in her career failed to homer. She improved slightly in 1945,  to .198/~.267/.287, but she did lead the league in triples (9) and tied for second in homers (2).

While Audrey's production may have fallen in her last year in the AAGPBL, she was by no means done with baseball and her hitting heroics. In fact, being just 21 years old, she was entering the prime of her career. Audrey, like many other All-Stars of the AAGPBL moved to the competing National Girls Baseball League in 1949. This League, with teams all in the Chicago area, featured former well known AAGPBL names like Sophie Kurys. Audrey left the AAGPBL for several reasons. First, her pay was substantially more than she was making at Kenosha. Second, being from the Chicago area she would be home every night. And third, she was now a medical student at the University of Illinois and she was closer to school and her studies.

Audrey played for the Parichy Bloomer Girls in Forest Park, Illinois and was an All Star outfielder in each of her four seasons in the league (1950-1953). Her best year may have been 1952. During this season she was second in average (.364), first in total bases, first in doubles, first in triples and first in home runs.

Audrey went on to attain her MD in 1952 and her ball playing days were over. Audrey was a practicing obstetrician in California until her death in August 31,1984 in a small plane accident in Rock Springs, WY.