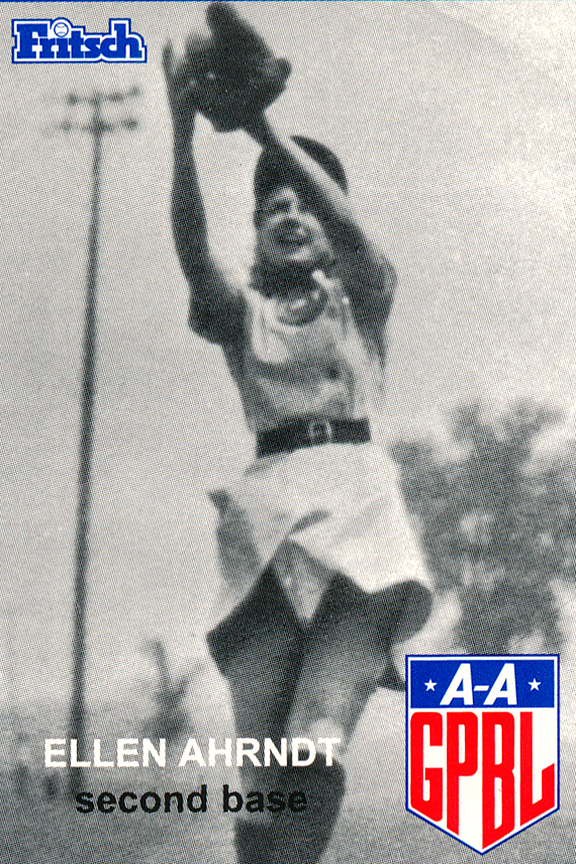 When South Bend played Racine in 1944, they had a wonderful surprise for me: Babe Ahrndt Nite. Not long after that event, I was released from the Blue Sox and decided not to continue to play as I didn't get a lot of playing time.

'll never regret that year and being a member of the AAGPBL".

Babe and her husband lived in Racine, Wis., and Mount Vernon, Bloomington, Jacksonville, and Pittsfield before moving to Brodhead in 1973.  Babe graduated from Wm. Horlick High School, Racine in 1941.  She taught sewing at Armstrong Jr. High School in Jacksonville. She played professional baseball with the All-American Girls Professional Baseball League. She was the starting second baseman for the South Bend Blue Sox in 1944.  Babe and her husband were also partners in the ‘Just for Him and Her’ clothing stores in Brodhead and Evansville, Wis.  She was an active member of Bethlehem Lutheran Church, Brodhead, and loved to quilt, fish with her husband Casey, and make pies for friends and family.

She is survived by two sons, Kurt, wife Corinna, Frank Proefrock of Edgerton, Wis., and Kipp (Phyllis) Proefcrock of Roadhouse; former daughter-in-law and dear friend, Nancy Menzel, Brodhead, Wis.; a sister-in-law, Elenore Ahrndt of Racine, Wis; a granddaughter, Cristin Newingham; and two great-granddaughters, Jacy and Maggie.  She was preceded in death by her parents; husband; a grandson, Dustin; five sisters; and a brother.

Funeral services [were] held at 12:30 p.m. Thursday at the Bethlehem Lutheran Church in Brodhead, Wis., with Pastor Kenneth Schaub officiating.  Burial [was] at West Lawn Memorial Park in Racine, Wis. Visitation [was] held from 10:30 a.m. Thursday until time of services at the church.  In lieu of flowers, memorials [were] made to the Bethlehem Lutheran Church, Wis.  The D.l. Newcomer Funeral Home in Brodhead, Wis., [assisted] the family.