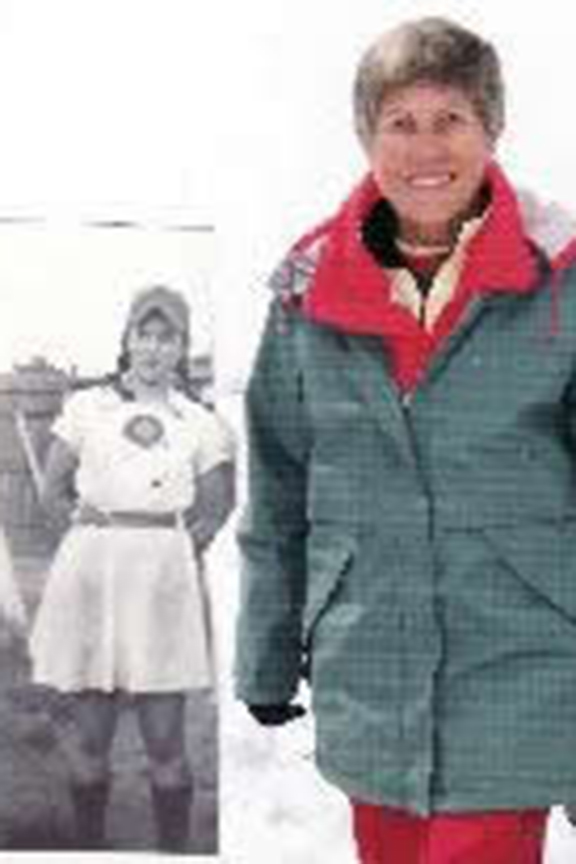 Growing up pre-Title IX, my athletic experiences were confined to the playground, intramurals, and our back yard. My father provided much quality teaching and coaching.  He allowed me to play on the church softball team whenever they were short of players.

The park system in South Bend provided girls' baseball teams with the same rules as the AAGPBL. I was the catcher on our team--Leeper Park.  I played against Janet "Pee Wee" Wiley as she lived on the south side.  She also served as bat girl with me for a few years before becoming a player.  I tried out for the league in 1950 when the tryouts were held in Chicago, but was eventually cut, so I continued to be the bat girl. One of my biggest thrills as a bat girl was to be allowed to catch batting practice and on occasion, warm up a pitcher in the bull pen.

I graduated from South Bend's Central H.S. in 1950, and from Ball State University in 1954 with a B.S. in Physical Education.  After graduating from Ball State, I moved to Minneapolis where I taught high school P.E. and coached swimming, track, tennis, and badminton. In swimming, I coached "age groups" for 35 years and was the first female swim coach in Minnesota.  Later, I was inducted into the Minnesota Coaches Hall of Fame, and in 1982, I served on the NISCA Board for two years. In 1970, I received an M.A. in physiology from the University of Minnesota.

I married in 1956 and had three children.  All of them were swimmers through college.

In 1974, I began teaching in the private system at Blake School and was named the Athletic Director there in 1980.  When this occurred, I was the first female athletic director over co-ed programs in Minnesota.  In 1986, I was asked to be the Athletic Director at an all girls' school in Shaker Heights, OH to build a more extensive program.

I feel my experience as a bat girl for the South Bend Blue Sox helped to nurture my interest in athletics and provided me with female role models. From 9th grade on, I knew I wanted to be a P.E. teacher and help all students learn proper skills to carry with them.

Since retiring from teaching in 1999, I've managed recreation facilities and country club pools, and for four years, rowed on a masters 8-oar shell. I currently teach swimming to children and adults as well as water exercise classes.

My competition emphasis as an adult began in 1974 when I learned to X-C ski while l was still in Minneapolis. I competed locally, throughout the U.S., and in World Masters through 2008 when finishing my ski career by winning the U.S. National Championship in three distances.  I've had the privilege of competing in eight different countries.  With lots of exercise, good eating, and many activities promoting women's health, I plan to "stick" around for a long time.