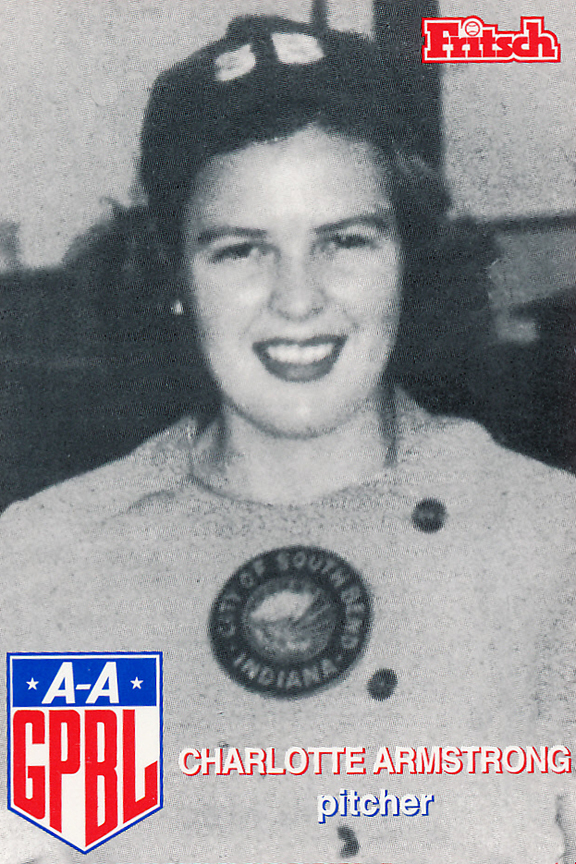 Although "Skipper" only spent two years in the AAGPBL, they were very colorful.  This Phoenix native was once on Robert Ripley's "Believe it or Not" for pitching two extra inning games, totalling 32 innings and winning both by shutouts.  She played for  the Chicago Bluebirds of the National Girls' Baseball League before rejoining a the Phoenix A-1 Queens softball team where she was an All-Star player six times.  She later began a fine arts career as a painter.

Charlotte T. Armstrong, an Arizona legend, died peacefully on November 24, 2008, surrounded by the family she lovingly acquired over her years. Charlotte was born June 17, 1924 in Dallas, Texas to Gladyse Nicholson Lubman and Wilhelm Lubman. She was two when her parents moved to Phoenix, and she lost her sister, Elizabeth, and her father at an early age.

Charlotte grew up in Phoenix, playing sandlot baseball in her neighborhood. As a youngster, she was befriended by local major leaguer Hank Lieber, who taught her to pitch. At the age of 14, Charlotte was scouted by the Phoenix professional softball team, the A-1 Queens, and began her sports career, developing into a record-breaking pitcher as she toured with the Queens throughout the West, as well as Madison Square Garden and international tours to Mexico and Canada. Later, during World War II, she was recruited by P.K. Wrigley to join the All-American Girls Professional Baseball League, and was a star pitcher for the South Bend Blue Sox in 1944 and 1945, during her "League of Their Own" years. Charlotte also played professionally for the Chicago Bluebirds of the National Girls' Baseball League, before returning to Phoenix where she attended Phoenix College and played softball again for the Queens as a member of their national championship teams. Charlotte was named a charter member of the Arizona Softball Association Hall of Fame and was recognized, with her baseball teammates, by the National Baseball Hall of Fame in Cooperstown.

Charlotte showed her artistic talent at an early age, designing attractive uniforms for the Queens, and then branching out into drawing and painting. She owned and operated one of the early shops in Old Town Scottsdale in the '50's, "The Paint Bucket," in which she sold everything from hand-painted blouses and boxer shorts to wastepaper baskets, handmade cards and invitations. Her shop was a favorite of visiting guests from the Elizabeth Arden spa and Camelback Inn, including Peggy Lee, Alice Faye and Phil Harris. Her work at the Paint Bucket attracted the owners of O'Brien's Art Emporium in Scottsdale, and with their encouragement, she began a career as a fine artist, creating beautiful trompe l'oeil still life and wildlife images, landscapes and more. Her works were sold in galleries in Scottsdale, Pinetop, Santa Fe, Palm Springs and Durango, shown at the Phoenix Art Museum and collected by art lovers across the Southwest. Her art appears in numerous corporate collections, including the old Valley National Bank collection, and continues to be appreciated by her friends and loved ones.

Charlotte was a sober member of Alcoholics Anonymous for 42 years. She shared herself freely with people, opening her heart and her home to those who needed her help. Eventually, she counted more than 130 different people who lived in her home over the years, who received both her wisdom and her down-home cooking. Charlotte's influence extended to all who were in her life, as she focused on helping others. She will be missed by many.