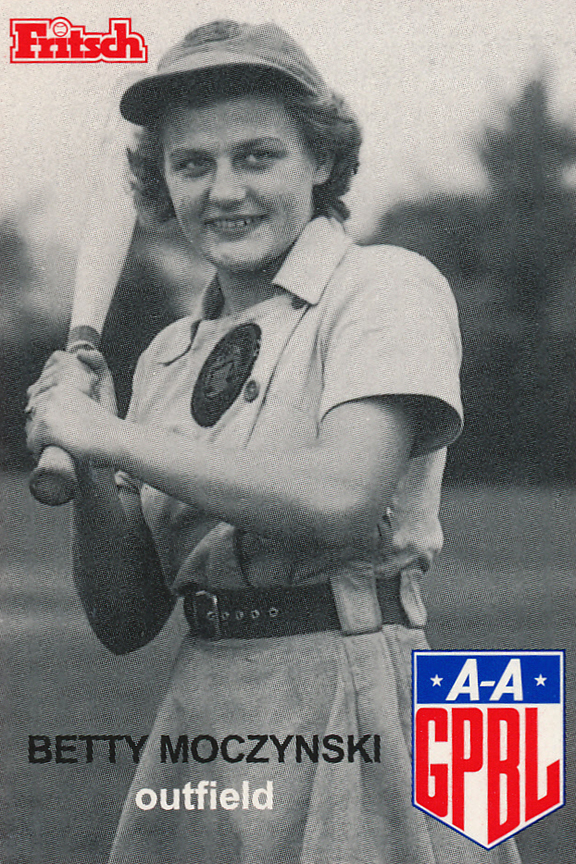 Betty Jane “Moe” Moczynski, one of the original players in the All-American Girls Professional Baseball League in the 1940s, has died in New Berlin, Wisconsin at age 91.

In 1943, the Milwaukee native joined the league, which was created out of fear that World War II would interrupt Major League Baseball.

She played one season for the Rockford Peaches, based in Rockford, Ill., and then went to the Chicago Bluebirds, in the National Girls Baseball League, where she played until 1947. The Rockford Peaches were the inspiration for the movie “A League of Their Own,” which starred Rosie O’Donnell, Madonna and Tom Hanks, who shouted the famous line, “There’s no crying in baseball!”

Moczynski, who died Wednesday, was a catcher and an outfielder. In her rookie year with the Rockford Peaches, she drove in five runs in one game, one short of the record that year, said her niece, Doreen Davidson.

"She said the movie was pretty close to what really happened. The players had to go to etiquette classes, and they had to wear those skirts which made it no fun sliding into base," Davidson said.

“When the movie came out, (in 1992) she really started talking about her time in the All American Girls league. From that point on she was a celebrity,” said Jeff Cwiklinski of Milwaukee.

Moczynksi was best friend and companion of Cwiklinski’s great-aunt, Christina Stroik, who died in 2010 at age 82.

In addition to being a talented athlete, who went on to coach softball teams for many years, Moczynski is remembered as someone who inspired people to take chances and try new things.

“She was fearless, strong, determined and very funny. She always encouraged me to go after anything I wanted to achieve,” said Jennifer Cwiklinski, Jeff’s sister.

“She was very encouraging to me as a young woman,” Jennifer added.

Moczynski worked nearly 40 years at the former Delphi Automotive plant in Oak Creek, where she was a plant supervisor. She was a Milwaukee Brewers fan, a Packers fan and she loved animals.

“She had quite a life after baseball,” Jeff Cwiklinski said.

In May 2003, she was inducted into Miller Park’s Wall of Fame along with Carl Long and Jim Robinson of the Negro League, and Mary Froning-O’Meara, also of the All-American Girls Professional Baseball League.

“She gave a wonderful speech that day,” Jeff Cwiklinski recalled.

She’s remembered for having a great sense of humor.

“She used to do silly things once in a while and would then laugh at herself. That’s what I learned from her, that it was OK to mess up sometimes and laugh about it,” said Debbie Yanke, a niece of Christina Stroik.

“She was also a very sensitive person who always wanted to do something nice for other people. That’s how I will always remember her,” Yanke said.

For the last seven years, Moczynski lived at LindenGrove Communities home in New Berlin, where more than a few residents had her 1943 Rockford Peaches baseball card.

“When she talked about baseball, she smiled a lot,” said Mary Murphy, a LindenGrove supervisor.

"She was very pleasant, quiet, and I think what really made her happy toward the end of her life was sharing a room with her sister. I think that made both of them very happy," Murphy said.

Moczynski is survived by relatives and friends.

Funeral services were held at the Bruskiewitz Funeral Home at 5355 W. Forest Home Ave, with a visitation from noon until the time of the service.

A private entombment was held at St. Adalbert Cemetery.