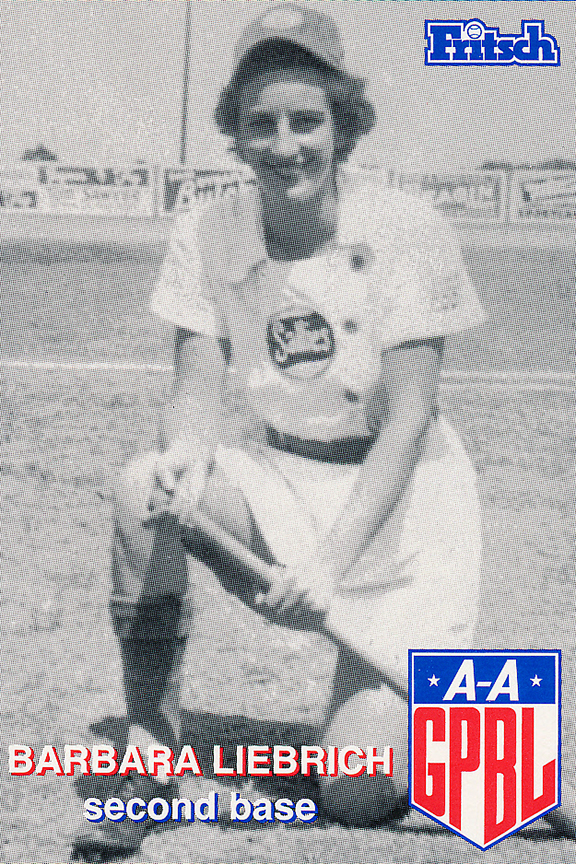 Bobbie was a player, manager, and chaperone at various times in her baseball career with the AAGPBL. She played for Rockford and Kenosha in 1948, then became the manager/chaperone of the Springfield Sallies, which was one of the Rookie Touring Teams in 1949 and 1950. In 1953, Bobbie became the chaperone for the Kalamazoo Lassies. She was voted "All-Star" Chaperone in 1954.

Bobbie became the chief accountant for a large manufacturing firm after her baseball career.

Barbara "Bobbie" Liebrich was in a league of her own as one of the nation's few female professional baseball players, but it wasn't something she bragged about.

"It was something that was in our past and we went on to do other things," said longtime friend Pat Barringer, who was also in the All-American Girls Professional Baseball League in the late 1940s.

Liebrich, who retired to Port Charlotte in 1999, died July 17 after a series of strokes. She was 83.

A talented softball player as a teenager in Rhode Island, Liebrich tried out for the expanding league in 1947 and began her six-year baseball career playing second base for the Rockford (Ill.) Peaches in 1948.

She also played for the Kenosha (Wis.) Comets, managed the Springfield (Ill.) Sallies on the Rookie Touring Team and chaperoned the Kalamazoo (Mich.) Lassies, which won the championship in 1954.

Liebrich was named the All-Star chaperone that year, the final year of the women's baseball league.

Liebrich later worked as an accountant and retired as the chief accounting officer for the Kalamazoo Label Co., where few co-workers were aware of her days on the diamond. Many of the friends she made playing golf in Florida also were unaware of her past, said Barringer, of Port Charlotte.

The women's baseball league was launched in 1943 in an attempt to fill baseball stadiums around the country while many of the nation's young men were headed off to war.

The short-lived league became the subject of the 1992 movie "A League of Their Own" starring Geena Davis, Madonna and Tom Hanks.

Barringer said she and Liebrich and many of their former teammates interacted with Marshall while she was doing research for the movie. They met her during a reunion in Cooperstown, N.Y., home of the National Baseball Hall of Fame and Museum.

One fictionalized account in the movie, Barringer said, was when Tom Hanks' character enters the women's locker room.

"No male manager in the league ever went into the women's locker room, ever. He would meet them outside the locker room," Barringer said.

The Baseball Hall of Fame recently dedicated its first statue honoring the more than 600 women who played the game professionally.

Liebrich's survivors include a brother, Robert, of Cranston, R.I.; sisters Jean Liebrich of Cranston and Ann Hays of Warwick, R.I.; and several nieces and nephews.

A memorial service was held in Rhode Island. Memorial donations may be made to the National Wildlife Federation, 11100 Wildlife Center Drive, Reston, VA 20190.