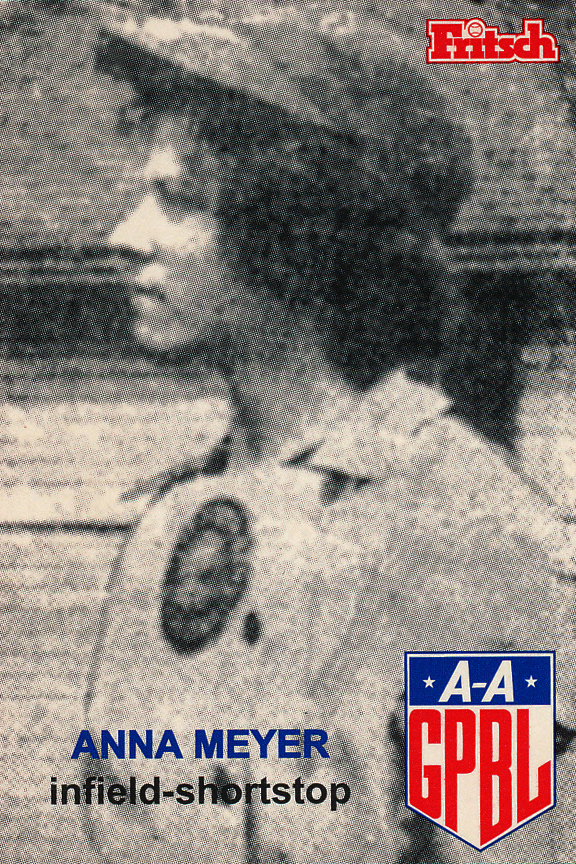 Hear about Ann's experience in her own words through the Grand Valley State Oral history project.

Petrovic, Ann Meyer
By Nancy Noble
Anna Meyer Petrovic was born in Aurora, Indiana, November 17, 1928, the youngest of nine children.  She grew up surrounded by sports and learned baseball from her five older brothers.  Ann practiced with them every day after school either catching for her brother Ronald or fielding for the family team.  When she reached the age of 12, the boys accepted her on their team as shortstop, and she continued to play on local men’s teams in the area, constantly improving her skills.

As World War II began, her father, Fred, became aware that Philip K. Wrigley (Chicago Cubs owner) had created a women’s baseball league to substitute for the men’s major league, so Ann took her first trip from her home town of Aurora to Chicago to try out as a professional.  At age 15, the 5’3” 100-pound high school freshman became one of the youngest members to sign a contract with the All-American Girls Professional Baseball League (AAGPBL).  Ann played for the AAGPBL’s Kenosha Comets and Minneapolis Millerettes during the 1944 season.

In 1945, Ann jumped to the Chicago National Girls Baseball League (NGBL) owned by Charles Bidwell.  It was a professional league that utilized softball rules.  She played shortstop for the Chicago Queens and Bluebirds.  By 1946 she became one of the league stars, affectionately called “Pee Wee” by her fans.  Even though she was small, her lightning fast speed and strong arm enabled her to maintain a .943 fielding percentage.

Although she played professional ball during the summer months, Ann returned to Aurora each winter to complete high school and graduated in 1947.  That fall she entered Nyack Bible College in Nyack, NY with the goal of obtaining a physical education degree.  It was there she met her future husband, George Petrovic.  In 1950 they were married, at which time Ann retired from baseball.  In 1952, she and George moved to Ashland, Ohio.  Ann supported George as he started his professional photography studio, but the couple still found time to start a family, having two sons, George and David.  Ann found an outlet for her competitive sports nature by playing with an excellent YWCA volleyball team for 25 years and helping her team bring home several local and state trophies.

In 1978, the family moved to Tucson, Arizona, where the boys finished their education.  George continued his photography work, and Ann worked for the ABCO grocery chain for 15 years.  While in Tucson, Ann received several honors for her contributions to women’s baseball, including being part of the AAGPBL’s first exhibit at the National Baseball Hall of Fame in Cooperstown, NY in 1988.  In 2008 she was also recognized by her home town of Aurora, Indiana, and was inducted into the Aurora High School Sports Hall of Fame.  In 2015, Aurora also named a ball park after her, and in 2010, she was inducted into the Ashland, Ohio Sports Hall of Fame.

Although a professional baseball player, being a Hoosier, Ann also loved basketball and was very excited to become a University of Arizona sports fan, adopting the college basketball team as her local favorite.  In 1997 she was fortunate to win an all-expenses-paid trip to the Final Four in Indianapolis, where the University of Arizona Wildcats upset the Kentucky Wildcats to win the national championship—an experience she will never forget.

Ann is a widow now but enjoys every baseball, football, or basketball that comes to Tucson or can be seen on cable.  While attending a Diamondbacks game in Phoenix, she walked up to Jerry Colangelo, introduced herself and started a lively conversation.  Jerry was delighted to give Ann a big hug of appreciation for her contributions to women’s sports and signed a baseball for her.

Ann continues to attend the AAGPBL Players Association Reunions every year, signing autographs and encouraging young women to pursue their sports dreams.  Ann has never lost her love of sports and continues to apply the basics of sportsmanship learned as a member of the AAGPBL and NGBL to all phases of her life.