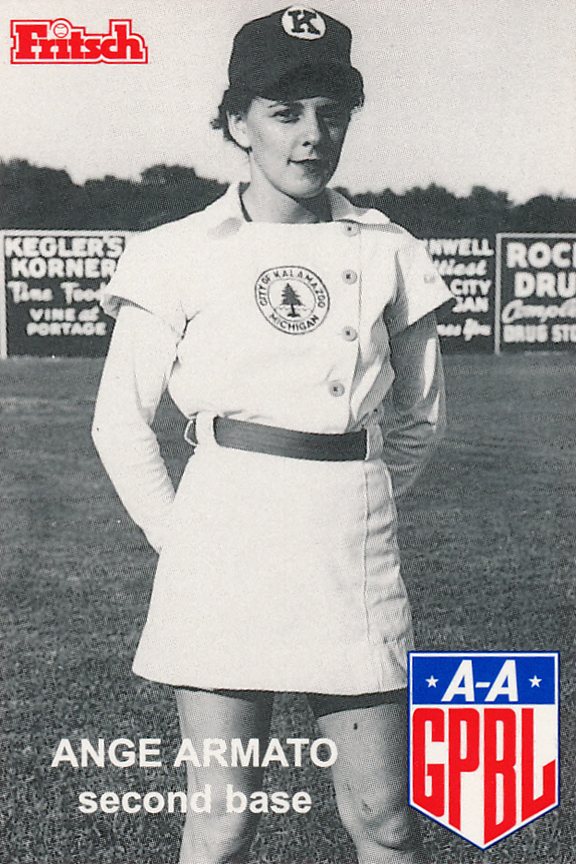 Ange Armato was the seventh girl out of eight children from a large poor Italian family. Because of her heritage, the seventh child was considered special. She was allowed to do more things than any of her other sisters. Her high school teacher encouraged her to go to college to become a physical education teacher. Who said kids can't have dreams and have them shattered. Her family had little money but scraped together enough to send her to art school in Rockford, Illinois to fulfill her dream of becoming an artist and have a career in art.

Although she enjoyed art, she was very sporst minded. She played basketball, softball, and raced with the young boys, beating many of them in grade school events. In high school, she was invited to play softball with a traveling league out of DeKalb, Illinois. The coach paid an older player to come to Rockford and drive Ange to all the games. She was their shortstop and was teased at being so small and the youngest on the team at 15. This experience lead to her playing with the Rockford Co-ed's girl's hardball team the following year. They played in nearby cities in Illinois and Wisconsin. There she became a pitcher and also played shortstop.

In 1945, she saw her first Rockford Peaches game at Beyer Stadium and was hooked. After practicing with the Rockford Peaches for three years, she went to a baseball school in Chicago. In 1948, Bill Allington invited her go to spring training in Opa Locka, Florida. Because of her age, size, and weight, Bill thought she should finish school and put some weight on. In 1949, she signed a contract to play with the Rockford Peaches and went to spring training in Peoria, Illinois. Her dream of being a Rockford Peach began. She was a utility second baseman for the Peaches. Snookie Doyle, their shortstop, was her favorite player and Ange knew she would never get to play that position. Due to an injury, she was unable to complete the season with the Peaches.

In 1952, her mother passed away and she went to Chicago to pursue a career as a technical artist, thinking she would never play professional baseball again. On a cold winter morning in1953, while riding the bus to work, she met the coach from the baseball school. He was the new manager of the Kalamazoo Lassies and remembered her from the baseball school. He invited her to spring training with the Kalamazoo Lassies that year. Her dream of playing professional baseball became a reality again. She signed a contract with the Kalamazoo Lassies in 1953 and was their utility rookie second basemen. Her roommate was Lefty Alvarez. In 1954, Ange was to be traded to the Fort Wayne Daisies but due to severe allergy problems she retired. Being a professional baseball player was the most exciting experience of her life. Although she didn't finish her career as a Rockford Peach, the excitement, the memories, and the friends she met would never be forgotten--especially being introduced to Jimmy Foxx by manager Bill Allington. Going to the reunions and seeing the girls brings back all the wonderful memories and fun times.

In 1988 the All American Girls Professional Baseball League was recognized by the Baseball Hall of Fame in Cooperstown, New York. This was the ultimate highlight of Ange's baseball career. In 1991, she started a brief movie career and was asked to participate in the movie "A League of Their Own."  Many of the older players were reunited in Cooperstown, New York for that part in the film. In the movie, she played shortstop for the blue team. She was proud of the way they produced the film and acknowledged the All American Girl's  Professional Baseball League.

.After retiring from playing professional baseball, Ange went back to Rockford to be around family. She worked for Barber Colman Company and became a pioneer for women draftsmen and later a technical illustrator. Learning all she could, she decided to move into the advertising world. She worked for local advertising agencies as a commercial artist and later a production manager.  She ended her career as Advertising Manager for Rockford Advertising. When she retired, she enjoyed traveling, golf, bowling and watching baseball and basketball.