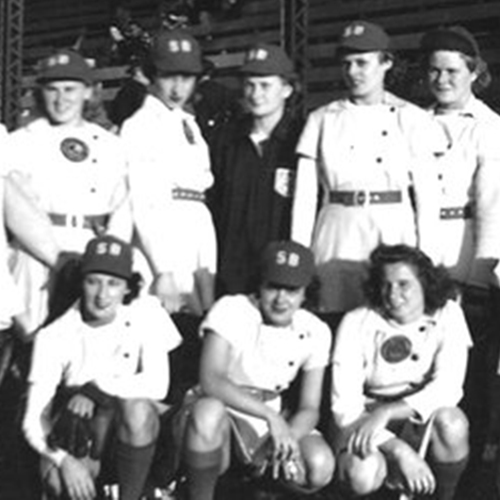 For the second successive year, the league champion also copped the Shaughnessy play-off crown, when the Racine Belles, duplicating the feat of the 1945 champion Rockford Peaches, went all the way in the post-season series to win double laurels. The Shaughnessy play-off series of 1946 proved a fitting climax to a thrill-packed season in the All-American and brought forth a great display of heroic pitching, fielding and hitting feats on the part of the participating teams and players.

The Racine Belles touched off their slam-bang season by defeating the South Bend Blue Sox three games to one and then taking the Rockford Peaches four games to two. The first series game for Racine was a seventeen-inning thriller with the Sox which they won 3-2 and the last and clinching game was a sixteen inning hair-raiser won by the Belles from the Peaches by a 1-0 score.

The fourth place Peaches reached the final round by virtue of their tight three game to two victory over the second place Grand Rapids Chicks, in a series which was featured by some scintillating pitching performances. Connie Wisniewski, the league's ace pitcher, made a Herculean effort to pull the Chicks through after they had suffered two straight losses in their home park to start the series. Wisniewski appeared in four of the five games played in the series. She won one of the Grand Rapids victories and saved the other in a relief role but finally succumbed in the final game before the opposing slants of Rockford's Millie Deegan, who tabbed two of the Peaches wins and held Grand Rapids to three safe blows in the finale. Carolyn Morris, series heroine of 1945, appeared in three games for the Peaches, winning one and losing one.

In the upper bracket, Racine was relying on the pitching of Anna May Hutchison and Joanne Winter, with the former going all the way in the opening seventeen-inning affair against Jean Faut of South Bend.

The fates favored the Belles in this series when, on two occasions, play-off games progress were called because of rain with the Blue Sox leading in both games at the time. After the Blue Sox had trampled the Belles to even the series in the second game behind the superb pitching of Betty Luna, it was all Belles the rest of the way. Hutchison repeated in the third game with a fancy two-hitter and Joanne Winter held the hard-hitting Sox to three singles in the finale.

When the Belles and the Peaches met in the final best-four-out-of-seven set, it was ding-dong pitching all the way. Millie Deegan, erstwhile star second sacker, who had turned to pitching in the late weeks of the regular season, proved to be the real thorn in the side of the Belles, and had Carolyn Morris, the Rockford ace, enjoyed the same pitching fortune, the Peaches might well have repeated their 1945 triumph. The Belles hopped off to a two-game lead by taking the opener easily enough and then snatching the second contest out of the fire with a ninth inning rally to win 2-1. Morris had held the Belles to one single in eight innings and Deegan was rushed to the rescue too late to save the game in the ninth. Jo Winter of the Belles, meanwhile, held the Peaches to three safe blows in the game.

With the teams switching operations to Rockford, Deegan came back to win a great 2-1 pitching duel with Hutchison, each pitcher allowing only three hits. Winter, back in her best form, put the Belles two games up again with a two-hitter on the following night, to win 4-1 against Morris. But Deegan again kept Rockford hopes alive by taking the measure of Hutchison and the Belles 1-0, with each team getting five hits.

The final game was played in Racine with Winter and Morris as mound opponents. Winter was in hot water continually and the base paths were constantly clogged with Peaches, as the Rockford team garnered 13 hits with never a runner denting the platter and left 19 base runners stranded. Meanwhile, Morris was pitching the masterpiece of them all and at the conclusion of nine innings, there had not been a safe blow by Racine. The Belles broke the ice in the tenth and brought about the removal of Morris in favor of Deegan but they did not score until the sixteenth inning, when Sophie Kurys led with a single, stole second and scored on a terrific sliding play at the plate on a short single by Betty Trezza to bring the 1946 season to a fitting climax.

Millie Deegan was the pitching star of the overall series, beating Grand Rapids and Racine twice each and winning four straight before the Belles finally stopped her in her final game relief role. Jo Winter shone on the mound for the Racine Belles, winning one from South Bend and three from Rockford for a final accounting of 4 wins and 1 loss. Sophie Kurys of the Belles would be adjudged the all-round star of the series, leading all the players of the series in hitting and scoring runs and playing a stellar game afield. In the South Bend series she scored six runs and garnered nine hits in four games and in the final game against Rockford, she was the entire Racine offensive, stealing five bases and scoring the only run of the contest after her own hit and steal.

Dorothy "Snookie" Harrell of the Peaches was a lively hitting star in series games and helped to keep the Peaches spark alive in their final efforts against the Belles. Dottie Kamenshek, the league's batting champion for 1946, was held down fairly well by Racine's pitching until the final game when she rapped out four hits. Maddy English, Racine third sacker, was an important hitter in the South Bend series, winning the all-important first game with a double in the seventeenth inning. Connie Wisniewski, Grand Rapids pitcher, and Edythe Perlick, Racine left fielder, both hit circuit blows in series games as did English. Betty Whiting of Grand Rapids did some fancy extra-base socking to help keep the Chicks in the series against Rockford.