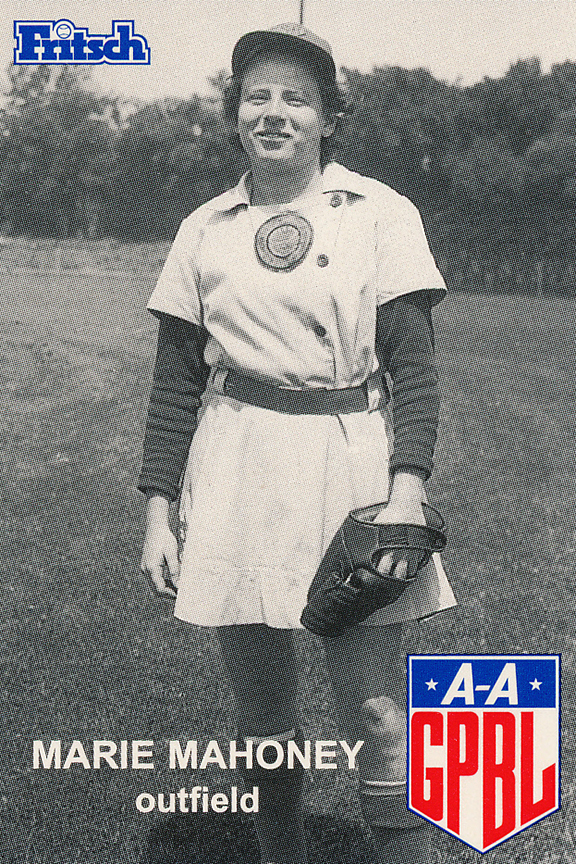 From an early age, Houstonian Marie "Red" Mahoney was an accomplished athlete. Her quickness and agility were a natural fit in softball, basketball, and other sports. After graduating from San Jacinto High School, she continued her excellence on the diamond as she became a perennial Texas state ASA All-Star, who led her teams to several state championships.

Marie started out as a pitcher, and after a brief stint at third base, she found her permanent home in the outfield. Opponents soon realized that hitting the ball in Red's direction was a losing proposition.

During her softball career, Red played against teams throughout the state of Texas, including San Antonio, home of fellow Texans Alva Jo Fischer and Ruth Lessing. In 1947, thanks to a recommendation by fellow softballer Mary Baker, Marie received an invitation to spring training in Havana, Cuba with the All-American Girls Professional Baseball League.

Mahoney joined the South Bend Blue Sox that year, and became the only Houston native to play in the AAGPBL. In 1948, Red showcased her base-running skill and ability to patrol the outfield while playing for South Bend as well as the Fort Wayne Daisies. That year she made only two errors and was named to the AAGPBL All-Star team.

Like many of her fellow All-Americans, Red played professional baseball for the love of the game. The AAGPBL was a chance to compete at the highest level while getting paid to do something she loved. It wasn't about making a statement--except for the one she made on the field.

After her retirement from the AAGPBL, Marie moved back to Houston and resumed her softball career. She worked at Kodak for 32 years, and was an accomplished bowler for 30 years. Red still resides in Houston and now works part time at a local golf course. She continues to serve as an ambassador for the AAGPBL and the game of baseball, and was instrumental in making the 2006 AAGPBL Reunion in Houston a great success. Red Mahoney embodies the "all for one and one for all" spirit of the AAGPBL

Casey Candaele, former Astros infielder & son of AAGPBL star Helen Callaghan Candaele introduced Marie for induction into the Texas Baseball Hall of Fame on  November 10, 2006.  The AAGPBL players attended her induction as guests in conjunction with their annual Reunion.

Emily Marie "Red" Mahoney passed away on January  23, 2016.  She was born to Richard J. Mahoney and Emily Summers on September 21, 1924. She lived her first 90 years here on earth at the same address in the Rice Military area of Houston before moving to Assisted Living in August of 2015.

Mahoney began playing softball at age nine. She also competed in basketball, tennis, and volleyball before joining awomen's softball team when she turned 16. After graduating from San Jacinto High School, she continued her excellence on the diamond as a perennial ASA all-star who led her teams to several state championships. She was primarily a pitcher, and after a brief stint at third base, found her permanent home in the outfield. She played for the All-American Girls Professional Baseball League (AAGPBL) from 1947 through 1948, and was the only Houstonian to play in the AAGPBL during its twelve years of existence.

Thanks to a recommendation by fellow AAGPBL catcher, Mary Baker, Mahoney became one of two hundred players to attend the first AAGPBL spring training outside the United States, which was held in Cuba at Gran Stadium de La Habana before the 1947 season. She made the grade and was assigned to the South Bend Blue Sox. She played two years, and returned to Houston after the 1948 season.Mahoney played softball after returning to Houston. She also worked as a microfilm technician for Eastman Kodak for 32 years, retiring in 1983. She was diagnosed with breast cancer in 1993, but recovered after treatment and returned to her daily life without any difficulty.

She is part of Women in Baseball, a permanent display at the Baseball Hall of Fame and Museum in Cooperstown, New York, which was unveiled in 1988 to honor the entire All-American Girls Professional Baseball League. In addition, Casey Candaele, former Houston Astros infielder and son of AAGPBL star Helen Callaghan, introduced her for induction into the Texas Baseball Hall of Fame in 2006.

An accomplished bowler for 30 years, Marie Mahoney was also a great golfer, and worked at the Texaco Golf Course until late in her 80's to support her golf habit. She also enjoyed attending SABR meetings until very recently.

Marie Mahoney embodied the "all for one, and one for all" spirit of the AAGPBL, and those who knew her were proud to call her a friend.