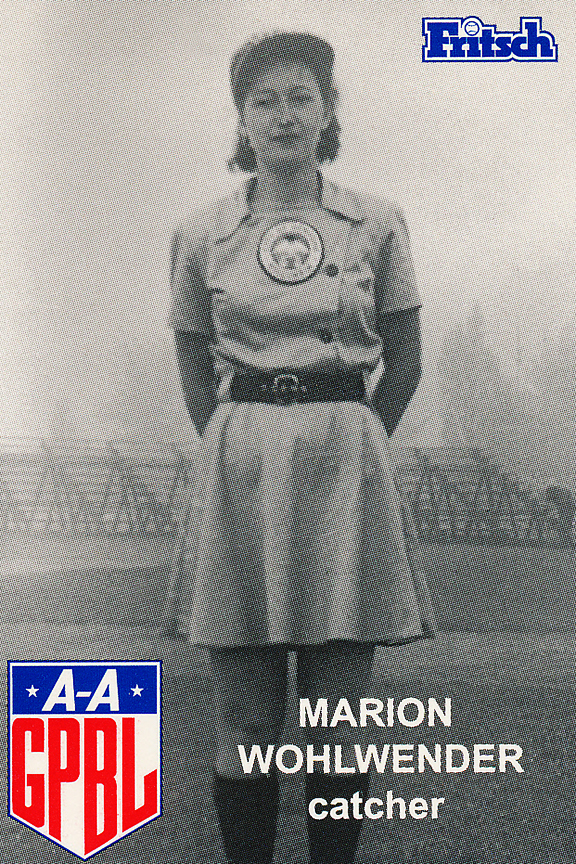 See "Related Article" at the top of the Player/Profile search column.

At the age of fifteen Marian played baseball for a team in Northern Kentucky sponsored by a local florist, Vic Brown, called the Rosebuds.  That’s when the proverbial bug bit her that sparked her interest and passion for baseball...ladies’ fast-pitch baseball!  Her love of the game and her skill in playing earned her an opportunity at the age of 21 to tryout for the All American Girls Professional Baseball League in Chicago. She received a professional contract to play for the Kenosha Comets in Wisconsin.  It was an exciting time for her.  However, she became homesick for Cincinnati.  Her father had recently passed away and she worried about her mother being alone.  She returned home to Cincinnati.

When Marian returned home, she started back to work. She met and fell in love with George Fricker.  George was a Corporal in the Army.  On February 14, 1945 they were married in Findlay, OH.  Immediately after their marriage, George had to report to Columbus, OH, for re-assignment after serving in Europe and the Mediterranean.  When his enlistment was over, they settled in Cincinnati (Cheviot), OH.

Soon there were three children, John, Marianne and Robert. Marian was thrilled with her new life and family. Marian worked tirelessly tending to duties at home.  Marian and George were hard workers…They were able to move into a home on the Westside of Cincinnati. With a big yard able to accommodate a vegetable garden and plenty of room to spread out, the family grew up.  Marian now worked at jobs in food service and finished her career at Mackes IGA in Cincinnati. She loved her job and the people.

Cooking and baking were her passions and everybody loved what she made.  Having the family and friends for holiday meals and birthdays, etc., were gifts of her hospitality.

Marian and George were faithful members of Westwood Cheviot Church of Christ and played an active part in the Mr. and Mrs. Sunday School Class….Always ready to serve.

Upon their retirement, Marian and George sold their house and lived in an attached apartment in Marianne and Roy’s house in Cincinnati.  They continued living an abundant life into their retirement years.  Sadly, George became ill and the love of Marian’s life passed away in August, 1994.

With the renewed interest in the AAGPBL due to the movie, ‘A League Of Their Own’, Marian made a trip to the National Baseball Hall of Fame in Cooperstown, NY, to see the “Women in Baseball” display.  A little league team visiting the Hall that day was thrilled to get an autograph.  In May, 2006, Marian traveled to Cooperstown again to attend the 60th Anniversary of the League at their annual reunion. The Members of the League observed the dedication of a life-size bronze statue representing all the “Women in Baseball” named “Woman at Bat.”  It stands in the courtyard at the Hall of Fame near the statues of that famous Brooklyn Dodgers battery of Johnny Padres and Roy Campanella.

Remember Marian and her zest for life. It will serve to encourage everyone who was fortunate enough to know her!