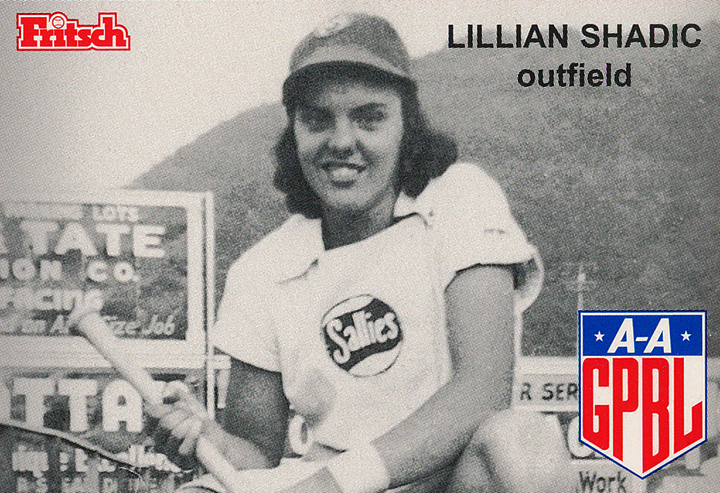 If you were on the play­ing fields of Roe Jan in the late 1940's, you might remember hearing the crack of a bat on a ball and another cheer for Pete to come on home. Given that nickname as a child, Lillian Shadic Campbell has retained it to this day. She has also retained her skill as a softball player, although back problems may have sidelined her at the mo­ment.

Pete didn't just ex­cel at softball, but she was even part of the Roe Jan boys' baseball team. She says they put her in right field so that she couldn't get in trouble. However, that apparently helped her hone her skills. .

Her father saw an article about the All-l­American Girls' Baseball League looking for players and he urged her to apply. A try­out in New Jersey and a visit from a talent scout at Roe Jan brought her an offer to join one of the teams. Never having traveled, Pete decided to join one of the traveling teams and played with the Springfield Sallies as they traveled in twenty-­six states. Anyone who has heard Pete speak about her experience can see the lasting influence this had on her life. She has scrapbooks of the time playing as well as the many reunions she has attended with former teammates. She even has her own baseball card. The Baseball Hall of Fame in Cooperstown has honored these teams with a special section where Pete's name is displayed along with those of all the women who played.

The popularity of the Girls' League was di­minishing and Pete found romance. After the 1949 season, she came home and married Clifford Campbell who had just returned from service in the Marines. They ran a dairy farm and raised seven children. Pete continued to play softball in local women's leagues and with her children and grandchildren. She shared her skills by coaching Little League and baseball teams. Even after bypass surgery, she continued to participate in the sport. It must be a measure of pride to see the playing fields of Taconic Hills lying on land that was once the Campbell dairy farm. Now she can watch her grandchildren play on these fields.

The alumni of Roe Jan who knew her "when" marvel that one of our own was a part of " A League of Their Own." More than that, we recognize her community spirit which has offered so much to others. Volunteering on the playing fields, in the church and school, and raising her family have kept her  busy in the community.

Pete and her husband had seven children and lived on the dairy farm until 1988. When her children were grow­ing up, she drove a school bus for Taconic Hills, and then ran a golf driving range until last year. She never gave up playing softball--even after being sidelined by triple bypass surgery 11 years ago. She pitched and played second base and center field for the Hudson Women's Modified Fastpitch League in Hudson, N.Y. until it disbanded last year. She coached her children's Little League and baseball teams. Of her four daughters, three sons and 15 grandchildren, a number are talented athletes.

She recalls one Hudson league game she played in with her daughter, Cheri. "I was playing second and she was coming in from center field and we collided going for the ball." It is clear that all her children and grandchildren, and now, great grandchildren, are inspired by her and connect with her through her love of the game. One grand­daughter has requested the boxes of letters Pete has stored over the years. The same granddaughter pitches for the junior varsity team at Taconic High School. "She's a great player," "But I tell her she has to vary her pitches; And she needs to build her confidence. But I also tell her, whatever she does is great."

While her talent has earned her a place in sports history, Pete's family is the home base of her life. In addition to supporting, coaching, and watching her grand children's games, and now a widow, she buys groceries for elderly and sick neigh­bors, volunteers at the elementary school and her church, and helps out with her grandchildren.  She gives talks about her baseball experiences at schools and other area organizations. Two years ago, she spoke to a group of residents at Jeer Rehabilitation and Nursing Center in Canaan, Connecticut, and was surprised by how many of those in attendance remembered the women's league and the days when Babe Ruth visited the Berkshires to hunt and fish at Copake Lake and Mt. Washington.

She has watched numerous changes in women's sports over the years since she played for the Sallies. She has baseballs of varying sizes: the largest, 12 inches in cir­cumference, was the ball the players used in 1943. The balls kept getting smaller and easier to hold and throw over the years. Her favorite, the one she played with is10 inches around is autographed by her teammates. Now women's baseballs are 9 1/2 inches, the same size as men's. "Girls' sports have come a long way; they have so many more opportunities now."

Recognition for past accomplishments has helped in­crease those opportunities. In November 1988, the league was honored with a major part of the Women in Baseball display in the Baseball Hall of Fame in Cooperstown, N.Y., where every player in the league has her name listed. This past Mother's Day weekend, a life-size statue of an All-American Girls player was dedicated at the Hall of Fame. The statue joins those of great men players in the gardens at Cooper Park, outside the museum. The league gave some 600 women athletes the opportunity to play pro­fessional baseball and to quote Pete, "it's an amazing feeling to have fans on their feet cheering when you hit your first home run.  Playing in the AAGPBL was some of the greatest days of my life.  I will never forget."  Congratulations Pete !

Lillian “Pete” Campbell, 88, passed away on Tuesday, June 27, 2017 at Albany Medical Center in Albany, NY after a very brief illness.

She was born on June 14, 1929 in Chatham, NY the daughter of Everett and Frances (Stupplebeen) Shadic Sr.

She was a graduate of the Roeliff Jansen High School

In 1949 she played in the women’s professional baseball league on the traveling team for the Springfield Sallies. On November 5, 1988 Pete became a member of the National Baseball Hall of Fame in Cooperstown, NY.

Mrs. Campbell drove the school bus for Taconic Hills for seventeen years. She was a member, and past president, of the Columbia County Ladies Auxiliary, Rip Van Winkle Ladies Auxiliary VFW, Cadby Shutts Post Auxiliary 7752 and Craryville Fire Auxiliary. She was a member of the Craryville United Methodist Church where she was financial secretary for over 40 years, and treasurer of the North Copake Cemetery Association for many years. She worked for Carroll Rheinstrom for 28 years. She loved sports and played softball until she was 75. She also played basketball and bowled. Pete coached her sons in little league baseball and her daughters in softball.

On January 29, 1950 she married Clifford H Campbell Sr. She assisted him on the Campbell Brothers Dairy Farm in Craryville for many years. She also did volunteer work at Taconic Hills School and ran the Campbell Hills Golf Driving Range.  There is a plaque near the Taconic Hills High School Softball Field honoring her.

She was predeceased by her husband, a daughter, a grandson, three brothers, and three sisters.

Burial followed in the Niver Cemetery in Craryville, NY.