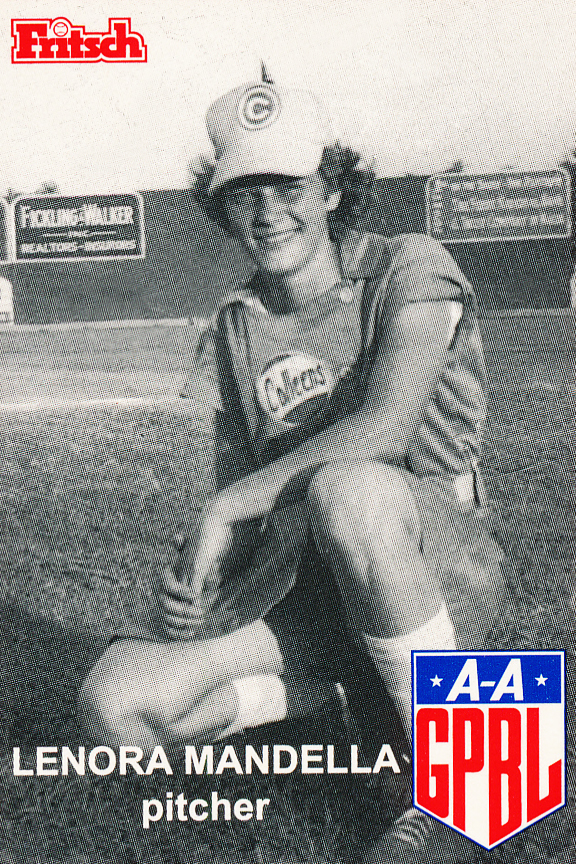 "Smokey" earned her nickname from her "hot" fastball.  She pitched a one-hitter in 1951 while pitching for the Peoria Redwings.  Smokey had  a lifetime pitching record of 23 games pitched with 4 wins and 8 loses  She spent  three seasons in the League, played in 60 games, and scored 16 runs on 22 hits with 16 RBI's.

After leaving the league, she returned to softball where she managed for nearly 30 years .

Lenora “Smokey” Mandella, a pioneer in women’s baseball who is in the Hall of Fame in Cooperstown, NY, died Monday, [September 12, 2005] of lung cancer at the age of 74.

Ms. Mandella, who grew up in McKeesport and was living in Herminie, Westmoreland County, was an accomplished baseball player and local duckpin bowler. She was employed by the Glasshouse in Glassport, Operating Engineers Local 66 Insurance Fund in Monroeville and Copperweld until she retired.

She got involved in baseball when Philip K. Wrigley, owner of the Chicago Cubs, financed and organized the All-American Girls Professional Baseball League in the mid-1940s, when many of the men were called to serve in World War II. She went to a tryout at McKeesport’s Renziehausen Park in 1949 and earned a trip to South Bend, Ind., for spring training. She played for South Bend in 1949 and then went on tour with the Springfield Sallies in 1950 and the Peoria Redwings in 1951. [She was re-allocated to South Bend in 1952.]

“We grew up playing fast-pitch softball in Mckeesport, but you made the transition [to baseball] pretty quickly,” said Norma Dearfield, a lifelong friend of Ms. Mandella’s, who played for a short time in the women’s pro league, though never with or against Ms. Mandella.

Ms. Mandella was a shortstop who also was used as a pitcher.

“She had a pretty good arm,” Dearfield said.

Playing in the league was a great experience for them, Dearfield said, including a chance too play in Yankee Stadium.

When a movie about women’s pro baseball, “A League of Their Own,” was released in 1992, Ms. Mandella and Dearfield attended a premiere in Monroeville.

“We thought it was really good, just a little bit of Hollywood, but it was about 90 percent the way it was,” said Dearfield, who recalled the women players having to attend charm school, use chaperones, wear skirts any time they were out and abide by curfews.

Ms. Mandella [along with all league players] was recognized in the Hall of Fame [Women in Baseball Exhibit] on November  8, 1988.

After her pro baseball career, Ms. Mandella coached softball for many years. Dearfield said even in recent years, the two of them were asked by slow-pitch softball coaches in McKeesport to help out in practice.

Another love of Ms. Mandella’s life was cats. Dearfield said she had a soft spot for strays and kept as many as 22.

Ms. Mandella is survived by her brother of Ligonier.

A celebration of life mass was held September 17, 2005 in St. Mary Czestochowa Church in McKeesport, followed by burial at St. Mary’s Polish Cemetery in White Oak.

Friends and family suggested memorial contributions be made to: In Care of Cats Inc., Elizabeth, PA.