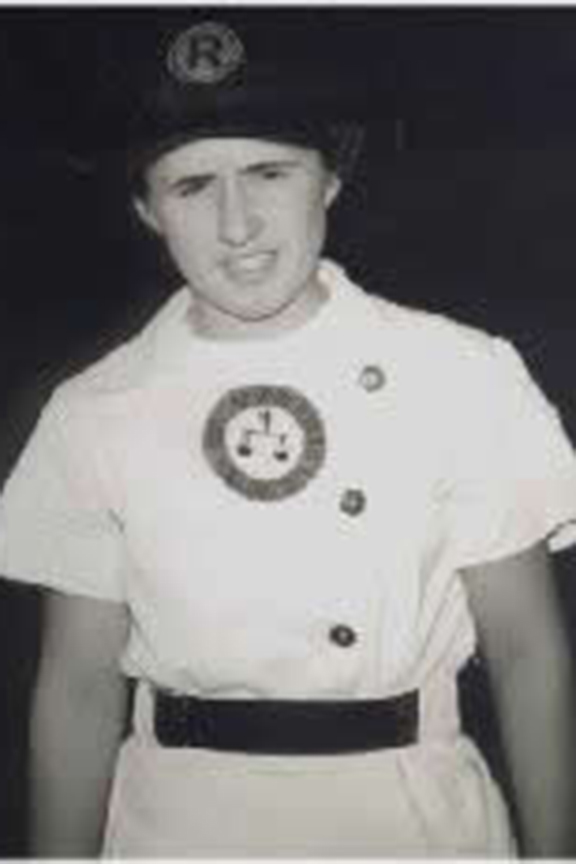 On May 23, 1953, Joan was pictured in the Rockford Morning Star as one of four rookies trying out for the Peaches, but it's unclear if she signed a contract or not because by June 16,1953 the Rockford papers reported that Joan was playing catcher for the Rockford Koeds, also known as the Ko-eds or Keith Jewelers' team. Joan's name was recorded as being a Koeds'/Jewelers' catcher through August of 1953. The Koeds/Ko-eds started play in 1949 as a Peaches farm team which played in a northern Illinois amateur girls' baseball league that utilized AAGPBL rules. In 1950, the league included teams from Milwaukee, Racine, Rockford, Downers Grove, and Forest Park.

The following summary of Joan Kaufman's Air Force and Civilian achievements after 1954 was provided by Audrey Stewart.

Joan spent twenty years in the US Air Force and achieved the rank of MSgt.  During this time she worked in Personnel and later as a Technical Instructor.

Joan served many years as Chief of Personal Affairs at Lackland AFB and later at Korat Air Base in Thailand.  Her job in Personal Affairs included briefing families of the deceased as well reporting casualties.  It also included procedures to control awards and decoration programs. During this time she was awarded her third Oak Leaf Cluster for her Commendation Award.

MSgt. Kaufman received a Bronze Medal as a result of her outstanding professionalism, efficiency, and leadership skill as a Non-Commissioned Officer in Charge of Casualty Assistance while in Thailand during the Vietnam conflict.

Later, she volunteered as a Technical Instructor at Lackland AFB.  She soon  became the Superintendent of the only Female Training Squadron in the Air  Force, which eventually increased to over 500 trainees under her leadership and guidance.

When Joan retired From the Air Force, she was active in her community and served on a Local Homeowners’ Board.   She also was on the Stone Oak Board of Directors and Architectural Review Board.  The SOBD served over 20,000 people.

After the Air Force, Joan also obtained a license to sell life insurance in Texas, a career she had for several years.  She also held a Texas Real Estate License.

Joan then opened a gift shop, for which she was the primary owner for 20 years. During this time, Joan was named a Notable Woman of Texas for l984-l985 by the Awards and Honor Society of America.

She was raised in Winnebago, Illinois and graduated from high school in 1953 as a member of the National Honor Society. She played baseball for the Rockford Peaches of the All-American Girls Professional Baseball League until the League disbanded in 1954. In 1988 she was included in the Women in Baseball Display at the Baseball Hall of Fame in Cooperstown, New York.

In 1955 she enlisted in the U.S. Air Force. During her 20-year career, she received several awards, including the Air Force commendation medal four times and the Bronze Star for her service in Indo China during the Vietnam War.

Joan's service as a WAF (Women in the Air Force) was groundbreaking. AS a recruiter in Chicago, she was named the WAF Recruiter of the Year. She was one of the first women to graduate from the Military Airlift Command NCO Academy, where she was a Distinguished Graduate. As a Military Training Instructor at Lackland AFB, Texas, she was the first woman to win Instructor of the Month against male competitors. Her final assignment was as Training Superintendent of the 3743rd WAF Training Squadron where she was responsible for more than 100 instructors and 5,000 women trainees each year. She retired in 1975 as a Master Sergeant.

Following retirement, she settled in San Antonio and attended San Antonio College and St. Phillips College, became a licensed realtor and a district manager for an insurance company. She operated her gift shop, "Yesterday's Treasures" for 20 years.

Joan was a lifelong avid gardener and became a Bexar County Master Gardener, serving on their Board of Directors. She also served as a Board member of her homeowners' association and for the Property Owners Association of Stone Oak. She was a member of the Eastern Star for more than 50 years.

Her parents and brothers, preceded her in death. She is survived by her sister, and nieces and nephews. She leaves many wonderful friends, whom she cherished as family, in San Antonio, including her former business partner, caregiver and best friend of more than 50 years.