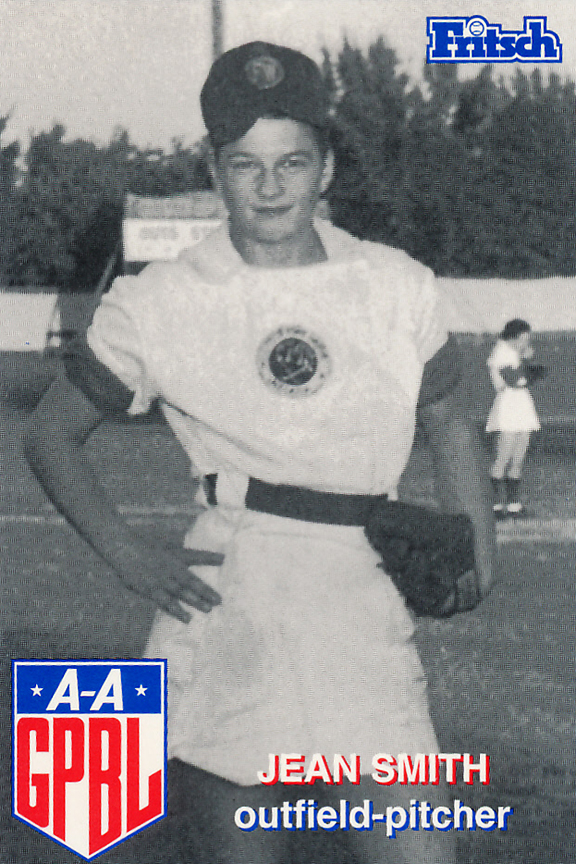 "Smitty" was a dangerous lead off hitter with a good eye and patience at the plate. In 1953, she had 71 base on balls, and stole 73 bases.

Jean was born May 9, 1928, in Ann Arbor, the daughter of James C. and Marie (Burnham) Smith. She attended Ann Arbor schools and graduated from Ann Arbor Pioneer High School in 1946. Athletics were her passion and as a 12-year-old she won the Ann Arbor singles table tennis tournament, and in 1943 she placed second in the state finals. Playing softball during high school led to her professional life with the All-American Girls Professional Baseball League.

In 1947, she moved with her family to the Five Mile Creek area of Harbor Springs. At the age of 20, she signed her first contract with the Kenosha Comets. She then played with the Fort Wayne Daisies, Peoria Red Wings and the Grand Rapids Chicks. In 1954, when the league disbanded, she went on the road playing exhibition games for the next two years. She, along with all AAGPBL players, has been recognized by the Baseball Hall of Fame at Cooperstown, NY

For 20 years, she was in charge of “mowing the meadows” at Barnyard Golf on her John Deere tractor. Jean worked at the Harbor Springs IGA and was the bookkeeper for Woodland Builders for many years. She also did cottage checks in the winter months on Lower Shore Drive.

Jean was a member of the First Presbyterian Church of Harbor Springs, Charlevoix No. 72 O.E.S., Five Mile Creek Community Association, and a Paul Harris Fellow of Rotary International.

Jean is survived by her sister, Shirley (Clyde) Anderson, of Harbor Springs; nieces, Susan (Michael) Weeks and their sons Ryan, Kyle and Tyler of LaSalle, Ontario, Canada, Amy (Scott) Stefanik and their daughters, Alison and Kimberly, of River Forest, Ill., Elizabeth (Ken) Burnet and daughters, Payton and Madison, of Seattle, Wash.; and nephews, James (Jody) Anderson and daughter, Katherine, of Franklin, Tenn., and Douglas (Marianne) Anderson and their children, Nicole, Natalie and Michael, of Arlington Heights, Ill.  Also surviving is her good friend, Betty Taylor, of Mount Pleasant, Mich.  She was preceded in death by her brothers, Wallace James Smith and his wife, Eleanor, and Douglas Albert Smith.

The funeral service was held on March 18 at the First Presbyterian Church.  Internment took place at Washtenong Memorial Park in Ann Arbor.